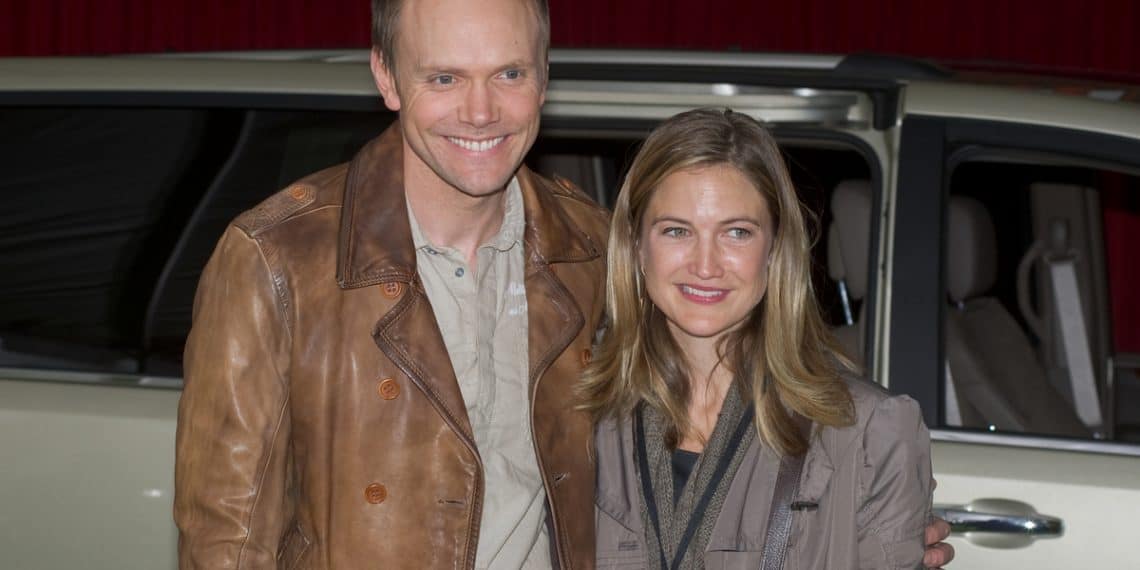 Celebrities often have an extremely difficult time maintaining their privacy because of persistent hounding by paparazzi. Their entire lives are sometimes on display for the whole world to see and judge. It is a rare occurrence when a celebrity and their family are able to remain hidden from the spotlight. Sarah Williams and Joel McHale have managed to do just that.

This couple has kept their private lives locked away from the prying eyes of the public. Any information that is revealed about their relationship and family is almost always due to a personal interview with Joel.

Who is Joel McHale?

Joel McHale is a well-known actor and comedian. Even if you do not recognize his name, you will recognize his face and voice. His best-known roles have been as a host on The Soup and as Jeff Winger on Community from NBC. He has been active in the film industry for over 20 years now.

Earlier this year he was the host of the after-show special of Tiger King, one of Netflix’s most-watched original documentaries. He has an extensive list of guest appearances, voice-overs, recurring roles, and hosting events.

Who is Sarah Williams?

Sarah Williams was born in America on August 10, 1970. When she was only ten years old her father abruptly passed away, leaving her mother to raise two children on her own. She always sings praises for how hard her single mother worked to provide an amazing childhood for her and her older brother. Her mother is 81 years old and is currently suffering from Alzheimer’s.

Currently, it is unknown if she has a career, but McHale has on more than one occasion described her as a “super mom” capable of amazing things.

Now that you have a bit of background on them, here are 7 things that you did not know about Sarah Williams and Joel McHale!

1. Where Joel McHale was Born

McHale was actually born in Rome, Italy! His father worked at Loyola University’s Rome Center as the Dean of Students. His father is from Chicago, Illinois, while his mother is a Canadian from Vancouver. Even though he was born in Italy, he was raised in Washington state, on Mercer Island.

Joel McHale earned his Bachelor’s in History and Master of Fine Art degrees from the University of Washington. Even though Sarah Williams’ education is unknown, we do know the two met after McHale graduated, so perhaps she might have attended the same university or one close by.

3. It was Love at First Sight

McHale claims that he fell in love with Williams from the moment he first saw her. He had just graduated from the University of Washington and actually asked a friend for help. She was a mutual friend to both McHale and Williams, so he begged her to ask Williams to go on a date with him.

Although she was incredibly doubtful, the friend did as he asked, and was surprised when Williams agreed! They dated for one year before they were married.

They have two sons, Edward and Isaac. Their first son, Edward, was born a few years after they were married. Unfortunately, he was born with a congenital malformity — he had two large holes in his heart.

He had to immediately undergo open-heart surgery. It was successful, and he is now a fit and healthy child.

Both of their sons were recently diagnosed with dyslexia, a common learning disorder. Dyslexia makes it difficult to read because patients have a hard time identifying phonetic sounds and attributing them to the letters and words. They usually are slow readers, have trouble spelling, and also mix up words that look similar.

Adults can have this disorder as well, but many of them only realize this later in life. Joel McHale is one of them. As he was listening to his children’s doctor as she explained dyslexia, he came to the realization that he had the disorder as well. It is linked to genes and runs in families, so he passed it down to his sons.

5. The Couple has Suffered Loss

Although no information exists on when this occurred, McHale did reveal in an interview that he and his wife had unfortunately suffered through a miscarriage. They were absolutely devastated and beside themselves, not knowing what to do. McHale is actually friends with Dr. Drew Pinsky, a media personality. Dr. Drew hosted a popular radio show, Loveline, and became good friends with McHale and his family. He is a real practicing physician, so McHale would often call him asking for advice and reassurance.

Both Sarah Williams and Joel McHale have expressed how much they owe Dr. Drew for his infallible help.

6.They have an Anniversary Coming Up

Their silver anniversary will be next year! They met in 1995 and dated for only a year before marrying in the summer of 1996. This upcoming year will be their 25th wedding anniversary, so they will probably have a nice celebration with their family. They have never had any scandals or controversies of any kind about their marriage.

7. What Joel is Doing Now

Joel McHale recently hosted the after-special of Tiger King and is currently co-hosting the podcast The Darkest Timeline, with actor and comedian Ken Jeong as a response to the COVID-19 pandemic. He will also be hosting Fox’s New Year’s Eve Toast & Roast 2021 with Jeong.

Despite having celebrity status for many years now, Sarah Williams and Joel McHale lead an incredibly private life. There is not much information out on Williams and their family. Everything we know about the pair has been revealed only through the occasional interview: they married when they were young, have two sons, and seem especially happy and content with their life. The pair remain tight-lipped about details of their lives and prefer to stay off the radar.

How to Come Up with Clever Names for a Group Chat

4 Brooke Nevin Christmas Movies that Are Worth Watching

Frigidity: Is It a Myth or a Diagnosis?