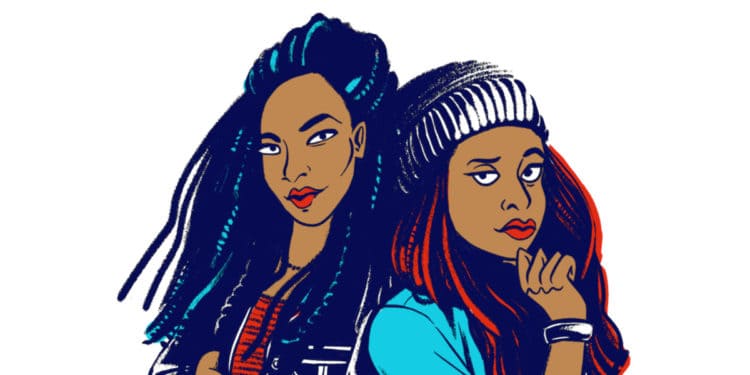 Comedy Writer and host of the podcast "Too Many White Guys", Phoebe Robinson, and Daily Show Correspondent and UCB troupe and Sketch connoisseur, Jessica Williams are not just dope; they are "2 Dope Queens".

We can all agree living in NYC is an experience of its own with strange nuances and consistent "what the fuck just happened" moments. The highly talked about WNYC podcast 2 Dope Queens takes a funny approach to living in this grueling city by tackling issues such as dating, love, sex, politics, to well…vaginas.

These funny ladies’ quick banter, witty comments, and conversational approach make you feel like you are talking to your girlfriends over a glass of sparkling rosé.

Being top-charted on iTunes with a rating of 5.0 by listeners, "2 Dope Queens" will be your next treadmill-running, subway-riding, walking to work listen. Subscribers can’t get enough with reviews like:

"One and a half episodes in and I’m hooked. The hosts are funny, the guests are funny, and the show just seems well rounded. I laugh pretty much the whole time and it honestly helps put me in a better mood, which is what comedy should do."

You can also hold the 2 drink minimum since this show features guest appearances and performances from local NYC comics. One reviewer states…

"I am a huge fan of Phoebe and Jessica, so it’s great to hear them bantering together and introducing me to comics I didn’t know before. Can’t wait to check out Aparna (Aparna Nancherla) in person!"

From broadcasting at Union Hall in Brooklyn in 2016 to now an HBO Special, Phoebe and Jessica have been doing the damn thing by leaving listeners wanting more.

In February of 2018, "2 Dope Queens", the show debuted on HBO with guests Uzo Aduba, Tituss Burgess, Sarah Jessica Parker and Jon Stewart. The show is a continuation of the podcast with the ladies on stage talking to celebrity guests intermingled with stand-up sets. The 4 one-hour long season can be found often replaying on HBO with the anticipated season 2 returning in 2019.
The show is raw, versatile and just freaking funny. Phoebe and Jessica are able to take content and show the different sides of women living in the city.

"2 Dope Queens" represent women of color struggling in a world of toxic masculinity and miseducation and seal it with a Hail Yassss.

This podcast showcases multiple facets of the lives of a variety of people of color and gender through comedy. Look, women like to talk about real shit too, even while getting waxed or shopping at Home Goods for a new accent pillow.

"2 Dope Queens" make the good, the bad and even the ugly funny.

Be sure to follow Phoebe Richardson @dopequeenpheebs and Jessica Williams @msjwilly for up to date information on the ladies from Phoebe’s new book "Everything’s Trash, But It’s Okay" in bookstores October 16 to Jessica Williams being in the next "Fantastic Beasts: The Crimes of Grindelwald" set to hit theaters November 16th.