Is the cast taking the idea of "glam" too far? 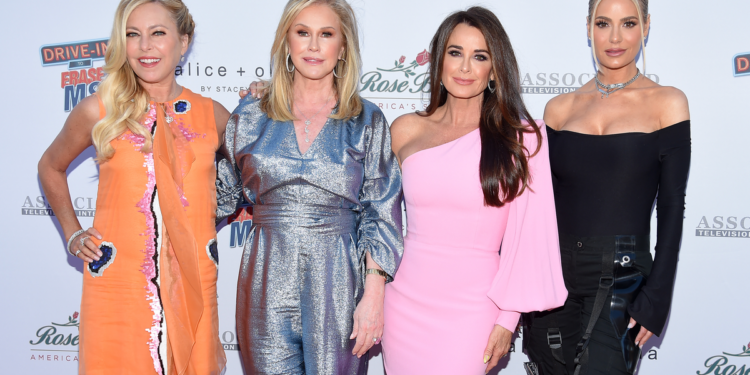 For those who are fans of The Real Housewives franchise, it’s been an entertaining couple of years. When the show first premiered it was to show viewers life beyond the gates of Orange County, eventually it evolved into a franchise filming in over 10 cities. One of the most famous ones is The Real Housewives of Beverly Hills which brought us famous names like Lisa Vanderpump. The show also has cast some already famous names outside the show like Kathy Hilton and Denise Richards.

At the moment, the show is the highest-rated show on cable for the second year in a row! Last year purely because of the Denise Richards and Brandi Glanville scandal, where Glanville claims that they had an affair. This year on the other hand the cameras are on Erika Jayne, whose husband Tom Girardi is accused of mishandling his client’s and law firms’ funds. His clients claim that Tom never paid them, and instead, he allegedly kept the money to himself to fund his lifestyle.

Not only is Tom in trouble, but his wife Erika as well. Viewers and castmates question whether Jayne knew of her husband’s “Ponzi scheme.” Over the seasons of the show, Jayne flaunts the wealth and lifestyle that she shares with the 82-year-old lawyer. After Jayne’s entrance into the show, it was noticeable how much the cast switched up their styles and glam looks.

Let’s take a look at the evolution of fashion in The Real Housewives of Beverly Hills and how Jayne affected that.

The Real Housewives of Beverly Hills: Real Or Fake?

Even though most people watch these shows for that maximalist lifestyle, some people feel it’s inauthentic. Dorit Kemsley is one of the most fashion-forward in the group, and her Instagram is full of photos in amazing outfits. Kemsley is seen in every episode, wearing high-end designers such as Louis Vuitton, even in scenes in her own home.

Kemsley was called out by Kyle Richards last season, for prioritizing “glam” and being late to a wellness retreat. Fans were shocked by Richards attacking her co-star because the whole group gets professional hair and makeup, including Richards. This brings up the question, is it all for the cameras?

Of course, anyone who’s on a reality show wants to look their best on TV, but is it too much? With Erika Jayne coming in and wearing very fun hairstyles, and unique outfits, it seems the cast felt the need to shake it up. Many viewers dislike this new image for the show because it doesn’t look or feel authentic at all. Even newcomer Kathy Hilton questioned the cast in one episode for dressing up just to eat dinner indoors.

Lisa Vanderpump is one of the most famous members of The Real Housewives of Beverly Hills but quit in 2019. Vanderpump left after 10 seasons after the cast accused her of selling a story to Radar Online. Vanderpumps’ home which has swans and ponies is a home many of us wish we could live in just for a day. Despite her lavish lifestyle, Vanderpump always kept a simple yet elegant fashion, she has a kind of “old money” style to her.

This is also true of cast members in earlier seasons with Yolanda Hadid, Kim Richards, And Brandi Glanville. These women were rarely in full makeup and luxurious outfits unless there is an event. After Erika Jayne enters the cast and flaunts her makeup artists and extravagant fashions, there’s a shift. Jayne who joined the season 6 cast, mentions she spends 40K a month on glam.

Following her joining the show fans notice an increase in cast members using glam squads, luxurious designers as well as parties. This is especially true of Kyle Richards, who is always super casual in older seasons. Richards who’s on her 11th season on the show even has dinner parties, as well as interview looks, be more glamorous.

Overall, it seems that after Erika Jayne’s entrance on the show there is a battle between the casts within fashion and beauty. Fans are hopeful that The Real Housewives of Beverly Hills will focus on fun lifestyles. Instead of unnecessary ridiculous outfits which seem to be the main focus lately.

From Glam To Lawsuits

The luxurious fashions and lifestyles of the cast members are also in questioning. Fans wonder how some of these cast members can even afford the things they show on TV. Erika Jayne especially is under the magnifying glass this season after her husband is accused of mishandling funds. His clients claim they were never paid, and his law firm lent over $20 million to Erika’s company, EJ Global.

This season everyone gets to see the drama play out, and the reunion will air this Wednesday at 8 pm. Throughout the season, Erika’s glamorous fashions continued even though she is in legal trouble. Jayne even tells Kyle Richards in one episode she has “zero dollars,” yet shows up to a trip with a glam squad. Fans even the cast of The Real Housewives of Beverly Hills are skeptical as to how she is affording all this.

Jayne continues flaunting her luxurious lifestyle on social media and the show. This is causing fans to call her “insensitive” and wonder why Jayne isn’t keeping a low profile. The fascination to maintain this perfect persona as well as flaunting luxury between the cast might be why.

From the Beginning of Jaynes’ introduction, she’s had a persona and character to play. Due to this, it seems no matter what, Jayne will continue with the glam squads and high-end designers. Lastly, Rumors are flying that Jayne will return for season 12, after a shocking reunion. Andy Cohen spills that during the reunion he grilled her about her behavior and involvement in her husband’s lawsuits.

Do you think the cast will tone down the fashion looks, or will the over-the-top glam continue?

A Look At ‘Gossip Girl’ Actor Evan Mock &amp; His Character in The Reboot

Why Brie Larson Loved Being On the TV Show Community

How The Brand Ruby Ribbon Empowers Women With Their Products