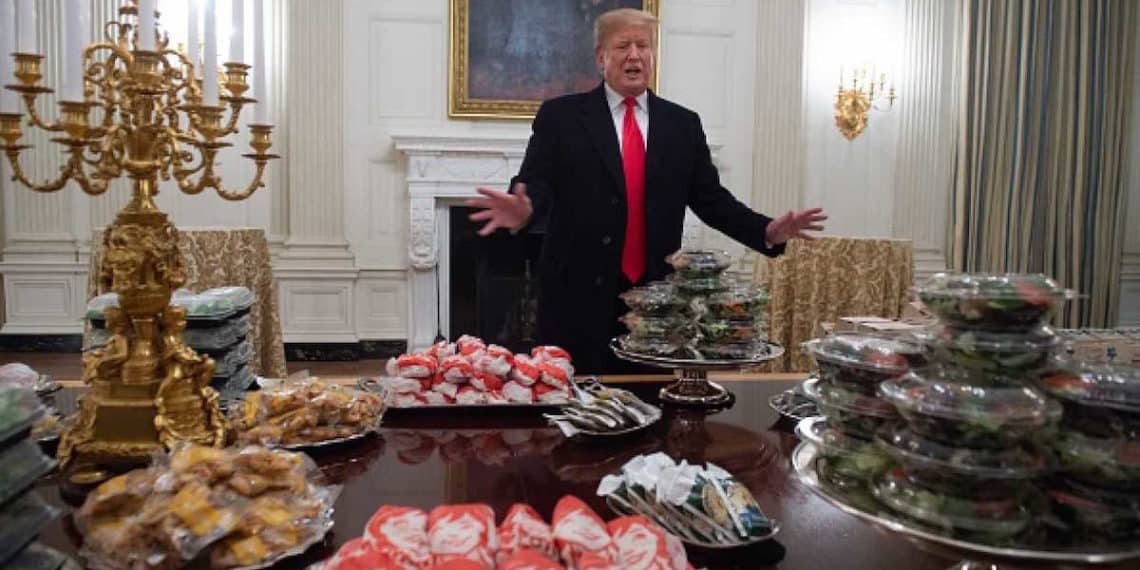 When Donald Trump held a celebratory night recently for the Clemson University football team, he decided that it would be fast food that was served. In the photograph that was taken prior to the team’s arrival, (who ate all of it as the president liked to point out) he proudly stands before an array of fried, high cholesterol, fattening junk food gleaming with pride. As if this, the food from Wendy’s, McDonald’s and Burger King, is the real representation of American Culture. And, as if this would be the food suitable for a group of young athletes.

When asked about this odd, yet unsurprising move, the president responded with the reasoning behind his grand effort to congratulate the players.

“If it’s American, I like it. It’s all American stuff.

… But it’s good stuff and we have the national champion team, as you know, Clemson Tigers. And they had a fantastic game against Alabama and they’re all here. They’re right outside the room and I think we’re going to let you see them. But I’ll bet you, as much food as we have — we have pizzas, we have 300 hamburgers, many, many french fries, all of our favorite foods. I want to see what’s here when we leave, because I don’t think it’s going to be much,” Trump said, reported by CNN.

“The reason we did this is because of the shutdown. We want to make sure that everything is right, so we sent out, we got this. And we have some wonderful people working in the White House. They helped us out with this.”

Ah yes, who would forget the wonderful traditional American food that is pizza (Italian), burgers (most likely German) and fries (Belgian). Who would have known that non-native American food, like it’s people, are mostly of European descent. Maybe Trump, whose mother was Scottish?

As for the shutdown, it was simply put on hold that day. And, still is. It is now currently the longest one in history and has left hundreds of thousands of workers unpaid and national parks in dire need of service. In fact, we reported on the effects a few days ago regarding disabled women. There are roughly around 56.7 million disabled people living in the U.S.A and this shutdown will jeopardize their lives as many rely on rent and food assistance programmes that are run by the government.

But, Trump will do what Trump does. And, something like fast food is arguably one of his many passions. Or, distractions from his stuffy political duties.

He has always been open about his adoration for American fast food. Trump spoke about it on his campaign trail when he told Anderson Cooper, “The Big Macs are great. The Quarter Pounder. It’s great stuff.” He has even appeared in commercials for McDonald’s and Pizza Hut. If you’d like to see the Oscar Worthy performance, watch below.

Despite all of the negativity surrounding this bold move by the president, I want to point out, as he also did, that he paid for it. All by himself. The guy who is worth 3.1 billion or 10 billion splashed out on fast food. 5,500 of his hard earned money.

Trump has set the bar high for his supporters and especially his critics. Now we have another idea for what to do if we ever hold a dinner party. Though we would probably have to eat it quickly. Wouldn’t the food have been soggy and cold by the time the players sat down to eat it? Cold fries and limp burgers are awful. According to the president, however, “Within one hour, it was all gone. Great guys and big eaters!”

No, It Doesn’t Make You Conceited to Know You’re Attractive