Betsy DeVos policies will give the accused the benefit of the doubt. 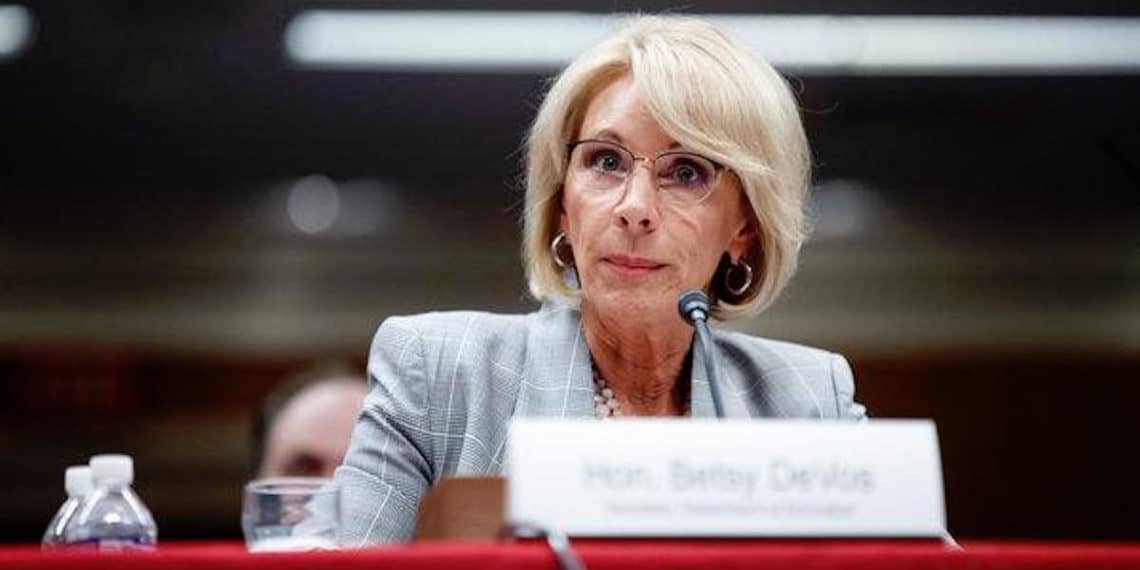 Betsy DeVos, the Trump administration’s Education Secretary, plans on eradicating the current rules and regulations and introducing new policies that would serve accusers.

The current regulations, which were set in place during the Obama administration, have been criticized for being strict in nature. The mandate for schools is to have a “preponderance-of-evidence” standard; which would result in the decision of punishing or expelling an accused student- given the right amount of evidence is found.

This, DeVos believes, is harsh and detrimental to the accused. In her proposal, recently obtained by the New York Times, it outlines that schools will pick the standard of evidence to determine if a party is responsible between: “preponderance of evidence” or “clear and convincing.”

Furthermore, it is the school’s own decision to go forth with an appeals process. Here are just a few things DeVos hopes to change:

Passed in 1972, Title IX reads, “No person in the United States shall, on the basis of sex, be excluded from participation in, be denied the benefits of, or be subjected to discrimination under any education program or activity receiving Federal financial assistance.” This remains the same under the new regulations.

Title IX also deals with schools responding to sexual harassment claims properly and fairly. Not to mention that student’s complaints going unheard is an act of discrimination in itself. This is due to the lack of belief that victims often fear and receive when coming forward with a complaint.

In other words, the normalization of rape culture on campus by trivializing what the victim is reporting. Slut shaming, objectification and even blaming the victim come with a complaint of sexual misconduct. Even today, in a Time’s Up world.

What does change, though, is the definition of sexual harassment in the new rules.

In contract, DeVos change will specify it as, “unwelcome conduct on the basis of sex that is so severe, pervasive and objectively offensive that it denies a person access to the school’s education program or activity.”

Colleges don’t have to legally investigate, or do anything about it if it isn’t on campus. But after freshmen year, most students move off campus. In fact, 80% of college students do not live on campus. Meaning that most parties, will too, be off campus, which a significant place where sexual harassment occurs.

This will negatively affect older students and community colleges, that often don’t have housing for students.

Coming forward with an allegation of assault or harassment can be frightening for the victim. There have been several cases where it has wrongfully backfired, leaving the person without proper justice and subject to scrutiny. Such as Brock Turner, who served only three months in prison and whose father has famously been quoted, when lamenting over his sons future, saying that it was, “a steep price … for 20 minutes of action.”

RAPE CULTURE: Brock Turner’s dad is sad he only got “20 minutes of action” & doesn’t even like eating steaks anymore

So, in Obama’s administration if the school knew about it in any way, or if any member of staff, the school would be reprimanded if no action had ensued. From a professor to an AR. But the possible changes will require the school to investigate only if the victim tells a designated official.

Other Changes (That Benefit The Abuser)

Schools will be advised to give “nondisciplinary individualized services” and “nonpunitive, time-limited and narrowly tailored” measures, that won’t affect either student. They also state, according to the NY Times, that schools will notbe punished for providing these “supportive measures” if the victim agrees not to file out a complaint.

Some of these measures include switching schedules, housing, and counseling. Consequently, if the perpetrator is still on campus, even if the chances of them bumping into another are slim, this doesn’t ensure that the victim feels safe and get the support they need. It does ensure that the accused continues their education and is relatively free of any detrimental punishment.

And people are mad

So not only is #DeVos helping out her friends at for-profit universities (e.g. Trump U) & their predatory marketing ploys that lead to student debt, now she is actually protecting sexual predators on campus & the schools they attend.
The woman is heartless https://t.co/b9VRltdG9O

This isn’t the only thing DeVos plans to change. She also wants to introduce guns into schools. However, she recently backtracked and stated that she has no intention to do so. But her earlier statements confirm her belief that teachers should be armed and should be given funding to pay for weapons. She once argued that one school should be able to have guns for protection against bears. In addition to other possible threats.

#BetsyDeVos is considering spending federal funds on guns for teachers

Why can’t Betsy spend her time managing the #DeVos family fleet of 10 yachts & let our country have a Qualified person run Education?

Statement Hair Accessories to Turn up Those Locks