New York Gal » The Refugee Caravan: Fearing Immigrants in the Age of Trump

The Refugee Caravan: Fearing Immigrants in the Age of Trump 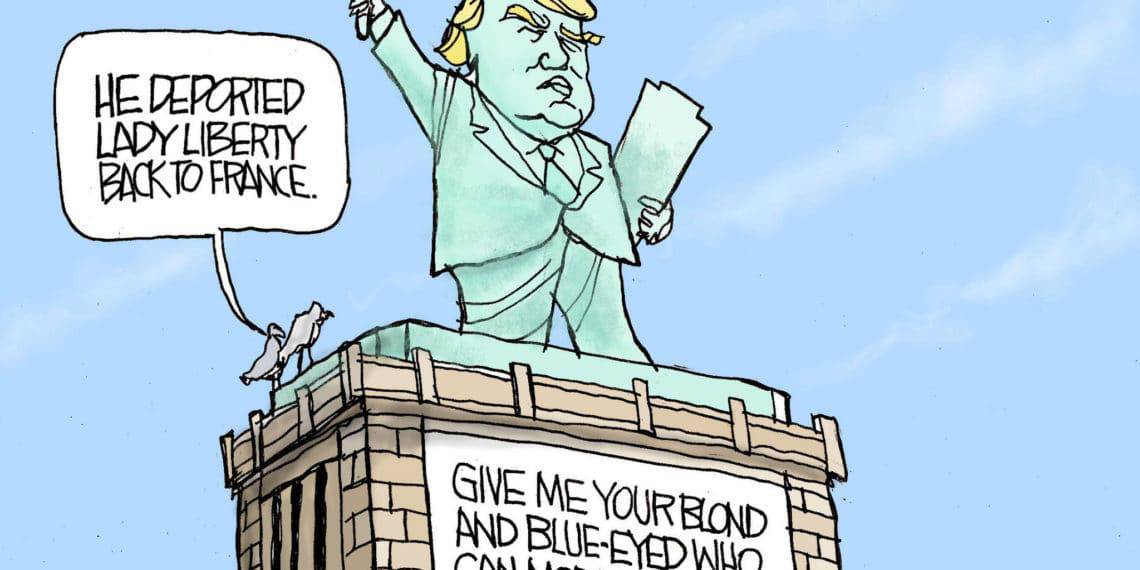 “This is an invasion of our Country and our Military is waiting for you!”

Donald J. Trump, Commander-in-Chief of the United States in a Tweet

We can hope that the person who is supposed to be our leader is addressing a real threat to the security of the people of the United States.

Who is this Invading Force?

Let us think through some of the possible threats to our national security.

Is Trump finally dealing with the Russian efforts to disrupt our electoral process and weaken our democracy?

Then he must be standing up to the white nationalists terrorizing citizens across the country.

No. Apparently, some white nationalists are “very fine people.”

Surely then, Donald Trump, the great defender of the United States, is talking about theNorth Koreans whose leader has promised to destroy our country with his nuclear arsenal. 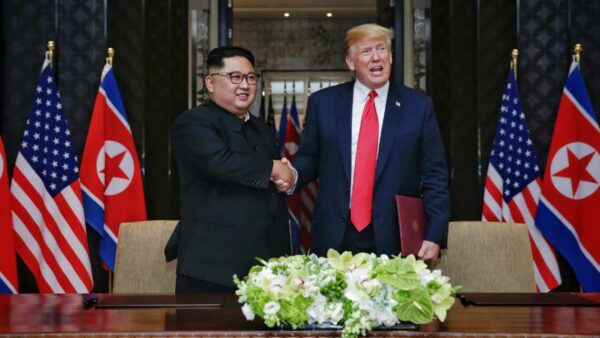 Nada. It seems that “the Donald” has fallen “in love” with this brutal dictator.

The Real Invasion According to Trump?

According to Trump, the national emergency is a caravan of refugees from Central America. In Trump’s mind, they pose a substantial and immediate threat to our security.

To combat this menace, our fearless leader is taking charge and sending more than 5000 soldiers to the border to fend off the pending invasion of our homeland.

We can only hope that the troops are well equipt.

We should not fault Trump, however. He is just doing what Americans have always done when facing a hostile takeover.

What is the Refugee Caravan?

The refugee caravan was formed in mid-October 2018 in Honduras. The group consists primarily of women and children trying to escape violence and poverty in Central America. They are coming primarily from three countries: El Salvador, Guatemala, and Honduras.

These caravans have become somewhat common in recent years. As human beings have done throughout their history, these people are migrating to places where they will be safer and have more opportunity.

Considering the violence in their native countries and the treacherous journey north, they band together to provide assistance and protection to one another.

“This is how it works. People making the trip see others, they see the bigger group, and they join it. These are people fleeing for their lives. It’s not some coördinated, political thing.”

Based on the current rate of travel and assuming no further obstacles, whatever is left of the caravan is expected to reach the United States border sometime in late December.

Why is the Refugee Caravan Coming to the United States?

Honduras, El Salvador, and Guatemala are among the most violent in the Western Hemisphere. Of course, some Americans might argue that this is not our problem.

Yet, the U.S. has intervened in each of these countries. In the 1980s, the United States provided weapons and military assistance to brutal dictatorships in El Salvador and Honduras. The C.I.A.overthrew a democratically elected government in Guatemala in 1954 leading to years of instability in the country.

Today, these three countries account for three of the four highest rates of female homicide in the world. So we should not be surprised that many wish to escape. Most of us would do the same if faced with the same circumstances.

Human instinct and common sense tell those seeking to escape harm to go to places where they can expect a better life. And the United States has historically been this kind of place.

Why Do Trump and His Supporters Fear the Refugee Caravan?

This is a good question because they do not have a good reason at all.

Some just make wild accusations without any basis in fact.

One can only speculate how he knows this. Maybe he thinks it is common sense? Or maybe white nationalists remember something about this country’s founding.

In theory,opponents of the refugee caravan are concerned for our security.

Reporters asked White House Press Secretary Sarah Sanders if the administration had evidence that there were criminals and terrorists among the refugees. And she replied “absolutely” and “we know this is a continuing problem.”

Does Trump Have Evidence to Support His Claims?

Trump’s administration has provided one bit of evidence: a speech from Guatemala’s president in January 2016 where he claimed that his government had captured 100 terrorists. Obviously, the Trump people hope that most Americans are dumb enough to hear the words Guatemala and terrorist and draw the necessary conclusions.

Trump’s geographically challenged vice-president also agrees that, even without evidence, there simply has to be Middle Eastern terrorists in the refugee caravan.

“It’s inconceivable that there are not people of Middle Eastern descent in a crowd of more than 7,000 people advancing toward our border”

Vice President Mike Pence in an interview with the Washington Post on October 23, 2018

Trump, while still insisting that the refugees pose a threat, finally acknowledged that he did not actually have any evidence of terrorists among the refugee caravan.A senior counter-terrorism official in the Trump administration told CNN that “we do not see any evidence that ISIS or other Sunni terrorist groups are trying to infiltrate the southern US border.”

The Refugee Caravan is NOT a Threat to Our Security

History tells us we have nothing to fear from these refugees.

First, these caravans are notuncommon and the number of people who end up arriving at the U.S. border is usually pretty small. Even so, they will not arrive for two months. So, we have plenty of time to prepare.

Furthermore, we have a system in place to process refugees.

So, there is about a 1 in 400 million chance that one of these refugees will kill an American. The chance that you will die from a heart attack while reading this story is considerably higher.

I suspect that there were many Native Americans who wished their system of vetting refugees was as effective.

Even Fox News recognizes how silly this argument is.

Those Who Fear Migrants Are Ignorant of History

“The left wants to allow in as many foreign migrants as possible because it will fundamentally transform the demographic and cultural foundations of this country.”

People migrate out of necessity and hope for a better life. There is no conspiracy. Human beings have migrated in large numbers for all of history.

Think about the stories in the Christian bible; In the Old Testament, Moses led the Jews out of Egypt into the Promised Land. Maybe you prefer the New Testament; What about Mary and Joseph traveling to Bethlehem and having trouble finding a place to stay?

White nationalists certainly must understand the history of migration. Caucasians have been the most migratory people in the history of civilizations. Caucasians, or Aryans as Hitler called them, migrated out of the central Asian region known as the Caucuses into Europe about 4000 years ago. Germanic people migrated into the Roman empire for hundreds of years beginning about 2000 years ago. And, of course, European descendants of these groups began migrating to the Americas about 500 years ago. They continued to do so until about 100 years ago.

Sometimes Americans Have Even Approved of Forced Migrations

These people were not from “shithole countries” as Trump likes to call them. But, back in the good old days of which Trump is so fond millions of people from these places were forcibly “migrated” into the United States.

Trump’s hero, President Andrew Jackson, championed forced migration. Yet, with the Trail of Tears, Jackson was moving “shit hole people”, as Trump would certainly call them, off of “white land”. This undoubtedly explains his fondness for Jackson. 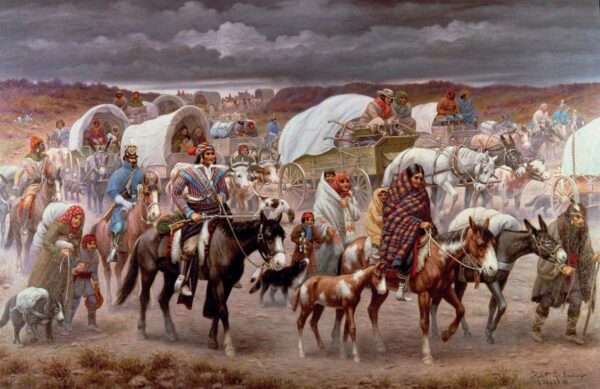 Americans Have Been Scared of Refugees Before

The history of the United States is the history of people seeking refuge. The Pilgrims did it. Indentured servants fled England to seek out new opportunities in the “New World.” The Americas were new to Europeans. But, they werealready populated by as many as 100 million people.Donald Trump’s own Scottish mother sought refuge in this country in 1929. I suppose many Americans now we had denied her entry back then.

Nevertheless, Americans have not always been welcoming. Denying entry to refugees was not uncommon in the 1920s and 1930s The United States certainly did its part to deny millions of people trying to escape the Nazis. Many of them ended up in concentration camps and gas chambers.

Those hostile to these refugees- most of whom were anti-Semitic- made many of the arguments that Trump and his supporters make today. Refugees could be spies or terrorists. We are overcrowded. We cannot afford it. They are not our problem.

Those who know history probably understand how wrong the arguments were. But, Trump and his fans don’t really care too much about history.

Trump is Ignorant About History But He is Also Lying

Most of Trump’s claims are so outrageously false that he could not really believe them. He is almost certainly just lying.His primary motive for raising the issue is political. He worries, as many Republicans do, that the midterm elections will probably not be favorable for him or his party.So, he is trying to scare his supporters to the polls with outrageous claims about refugee terrorists.

He even suggests that the Democrats are funding the migrant caravan.

The Democrats want caravans. They like the caravans. A lot of people say, I wonder who started that caravan?

“Do you know how the caravan started? Does everybody know what this means? I think the Democrats had something to do with it.”

But, really, Trump is trying to hide the fact that he and his policies are very unpopular.

Trump and His Merry Band of Hypocrites

Trump likes to tout his Christianity and many so-called devout Christians strongly support him. These people can call themselves whatever they want, but they are definitely not Christians. Giving refuge to the migrant is a non-negotiable tenet of the Gospels.

If you don’t believe me, ask Jesus:

“Truly I tell you, whatever you did for one of the least of these brothers and sisters of mine, you did for me.”

The story of the Good Samaritan offers another example of Jesus making this point. Jesus recounts the plight of an injured traveler. The self-righteous men of God left him for dead. Finally, a Samaritan, enemies of the Jews, stopped and assisted him. Jesus asks,“Which of these three do you think was a neighbor to the man who fell into the hands of robbers?” The religious scholar questioning him responds, “The one who had mercy on him.” Jesus instructs him, “Go and do likewise.”

So, it is pretty simple. If you don’t believe we have a moral obligation to help the migrants seeking refuge in the United States, you are not a Christian.

Why We Should Welcome the Refugee Caravan

One does not have to be a Christian to believe we have a moral responsibility to help those in need, regardless of race, creed, color, or national origin. But, one must believe this if they want to call themselves a Christian. Indeed, all religions include moral obligations to help the less fortunate. Even if not you are a religious person, humanitarian ethics should compel us all to feel compassion for people in need. This is simply not a morally ambiguous question.

There’s a Reason Why Sex Is Painful for You

Souk: the Artisan-made Fashion You Never Knew You Needed