How to host a Friendsgiving that your squad will never forget. 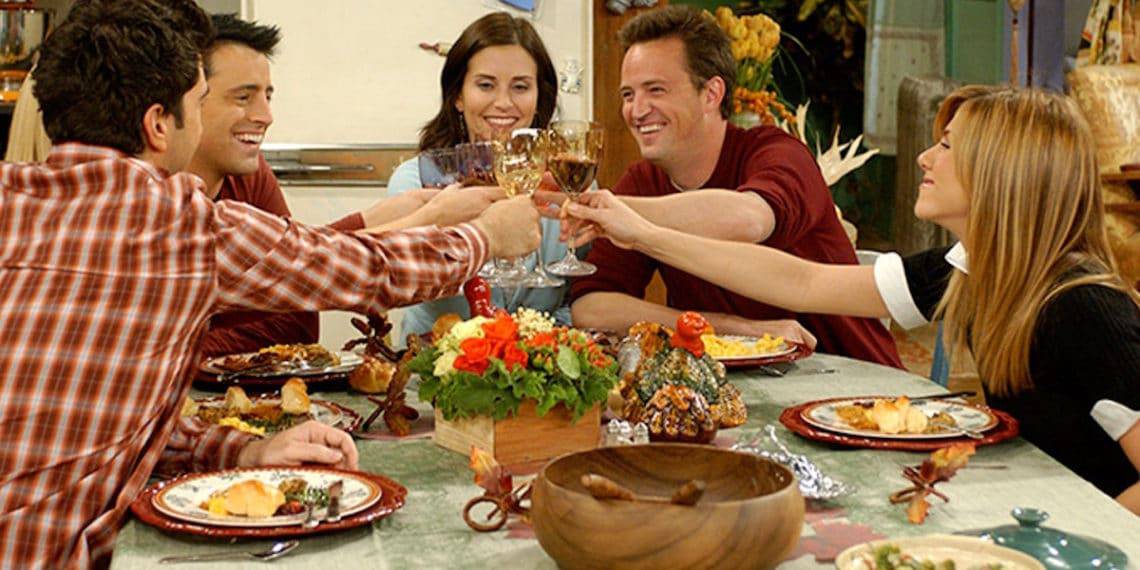 Even at the best of times, at the peak of summer, on a blissful sunny weekend, rounding up friends to meet can seem like an improbable idea. Finding time to meet up with one friend alone can take weeks of re-scheduling and organizing to align your free time together.

I’ve learned that it’s part of being an adult and that sometimes (most of the time), spending free time doing nothing at all is necessary to function. So, on days when commuting and working aren’t required, staying in bed sounds better than brunch with a friend.

As much as I love SATC, the most unrealistic part of is that four professional women havethat much free time to hang out and drink cocktails. It even beats their impossible priced rents in relation to their earnings. Carrie Bradshaw could not have been able to afford her lifestyle and yet, I still romantically dreamed of moving to the city and following in her Manolo Blahnik’s and sipping on never-ending cosmos.

Still, television and shoes aside, Thanksgiving is approaching and those that aren’t going home for it will have the day off. Which makes now a perfect time to start planning, as you already know that most people willprobably be free. And, who wouldn’t want to have a meal with their friends and drink wine while you’re wishing you were home? It could be less gloomy than eating a take-out on your sofa thinking about your mum’s cooking.

Preparation is key. It will avoid three mashed potatoes and no vegetables. Guaranteeing everyone knows who is cooking or bringing what will make the day flow as easy as it would if you were your parents. I will never know how they manage to get that many dishes done at the exact same time and for them to be the same temperature when they are set on the table.

Here’s our guide to make sure you look like you know what you’re doing:

Send out a group text, make a Facebook page or even a Google Doc to make sure that everyone that you think will be in town, will be free on the day. Although Thanksgiving is a few weeks away, people may have already made plans for another “Friendsgiving”.

You Don’t Need to Invite the Whole City

Plus, the Ikea dining table that you love for its compactness can only hold a handful of people, even with extra chairs.

As host, it is your job to cook the turkey, or main dish, whatever it is. Unless you want your friend to carry a turkey through the city, which isn’t very “Friendsgiving” of you.

After establishing who is coming, send out another email, text, Facebook page for if anyone wants to volunteer to make something. Unless you know of someone that mentions their renowned and almost Michelin star stuffing. Let the other guests bring dishes on a first come-first served basis.

Have a Google Doc

To keep track and have everyoneon the same page, make a Google Doc spreadsheet and write down everyone’s dishes they are making or what they have volunteered/assigned to bring.

This will make sure that no one will end up confusing their dish with another person and making sure the wine and alcohol people don’t forget theirs because that would be very sad.

Make sure there are PLENTY of Vegan/Vegetarian options

Vegetarian, vegan, gluten-free or guests suffering from allergies might want to eat something other than a plate of vegetables. It’s happened to me too many times.

I always make sure to tell people in advance that I don’t eat meat. PSA: This means gravy and stuffing too. Make some veggie gravy and stuffing so that everyone can have a bit of something. And, ask! Some will just assume everyone knows that they are allergic to tomatoes after knowing them for years.

Are There Enough Cups?

Are there enough spoons, knives, plates, napkins? Is there enough water, butter, tablecloths? Double check that you have enough of everything to set the table with and for people to use. To save an unlucky late-comer from drinking wine out of a mug.

To stay connected to your usual Thanksgiving traditions, introduce them to your guests and have them introduce theirs. Whether its football, monopoly or saying ‘thanks’ to each friend for something they did that made you smile this past year, be thankful for it.

How Daylight Savings Affects Your Body and How to Cope

How to Change Careers Without That Guilty Feeling