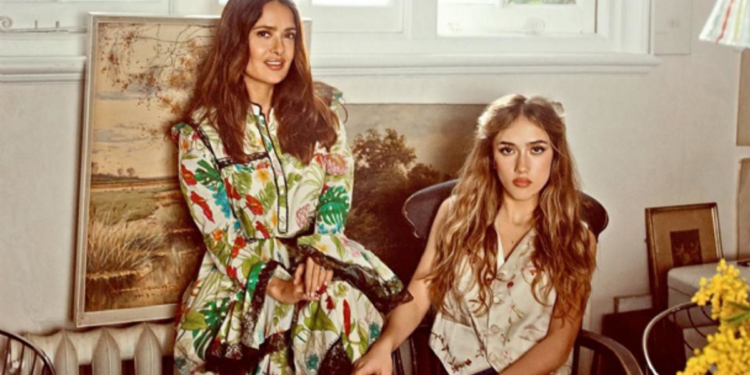 Many children of celebrities understandably live a rather private life. Valentina Paloma Pinault has lived the majority of her life in this very private way. Occasionally she would show up on her mother’s Instagram photos, but that was pretty much the extent of her public appearances. Lately, however, she has been making more public appearances with her mother on red carpets and in magazines. She has also done multiple interviews for these recent appearances. So who exactly is this young celebrity and what does she like to do? Here are four fun facts about the famous celebrity daughter, Valentina Paloma Pinault.

François-Henri Pinault, Valentina’s father, is a French businessman. He is currently 60 years old. François has been the CEO and chairman of Groupe Artémis since 2003. In addition to Groupe Artémis, he is also the CEO of Kering. Kering is a luxury fashion company that owns brands Balenciaga, Gucci, Saint Laurent, and a few others.

Valentina Paloma Punault’s mother, Salma Hayek is a very famous and talented actress. Salma is in her 50s and has had many incredible roles throughout the years. She has even recently joined the Marvel Cinematic Universe as Ajak in Eternals. She attended the red carpet for this movie with Valentina and spoke about how she was surprised she would be cast as a superhero at her age. Salma said when she got the call she thought it would be for a superhero’s mom. After joking about this, Salma also spoke about how lucky she felt to bring more representation to superhero films.

Valentina Paloma Punault’s mother has openly talked about how Valentina struggled during lockdown from the Covid-19 pandemic. Like many of her peers (and frankly the rest of us), the young teenager really missed seeing her friends. She was, however, still very independent with her school work, though she did not enjoy it as much. One thing that surely helped Valentina through this difficult time was her hobbies.

School work was not the only thing Valentina Paloma Pinault was independent with. She also learned several instruments entirely on her own time and on her own merit. In the incredibly short span of just two months, Valentina taught herself how to play guitar, piano, and ukelele.

In addition to her musical talents, Valentina also enjoys drawing and writing. Her mother has said she is particularly good at writing stories. Salma Hayek apparently offered to help her daughter produce one of her many stories. According to Hayek, however, Valentina turned her down saying she wanted to produce them on her own when she gets older.

She Often “Steals” Her Mother’s Things

As any mother knows, motherhood can be extremely hard. Even celebrities face challenges in motherhood from time to time. One unexpected and lighthearted challenge for Salma Hayek was that she would be sharing her things with her daughter. Ever since Valentina Paloma Pinault was little, she wanted to dress herself rather than let her mother pick her clothes for her. At the premiere for Eternals, Valentina spoke about how she always steals her mother’s clothes, makeup, and perfumes.

Salma has said that Valentina is very talented at makeup and even teaches her mother how to better apply it at this point. Valentina has also been very open about how much she loves perfumes. She even collects them! In addition to taking her mother’s clothes, she also loves to thrift for vintage pieces for her wardrobe.

Valentina Paloma Pinault Wants To Follow In Her Mother’s Footsteps

While Valentina Paloma Pinault is still only 14 years old she has been very decisive and open about what she wants to do in her life. She has said in interviews that she wants to go into the film industry just like her mother. However, Valentina has a slightly different plan than her mother’s. She wants to act for a while and then eventually become a director. Valentina has said this is the path that makes the most sense to her. She also volunteers very often at soup kitchens and wants to continue doing so. She is very passionate about the topic of homelessness and caring for others.

A lot is still unknown about Valentina Paloma Pinault as she is still very young. But what we do know is that she seems to have a very good relationship with her mother, and even wants to follow in her footsteps. She is also very independent and talented. Now that Valentina Paloma Pinault is a teenager, she has been making more public appearances and given her current career goals, she can be expected to make many more in the future.