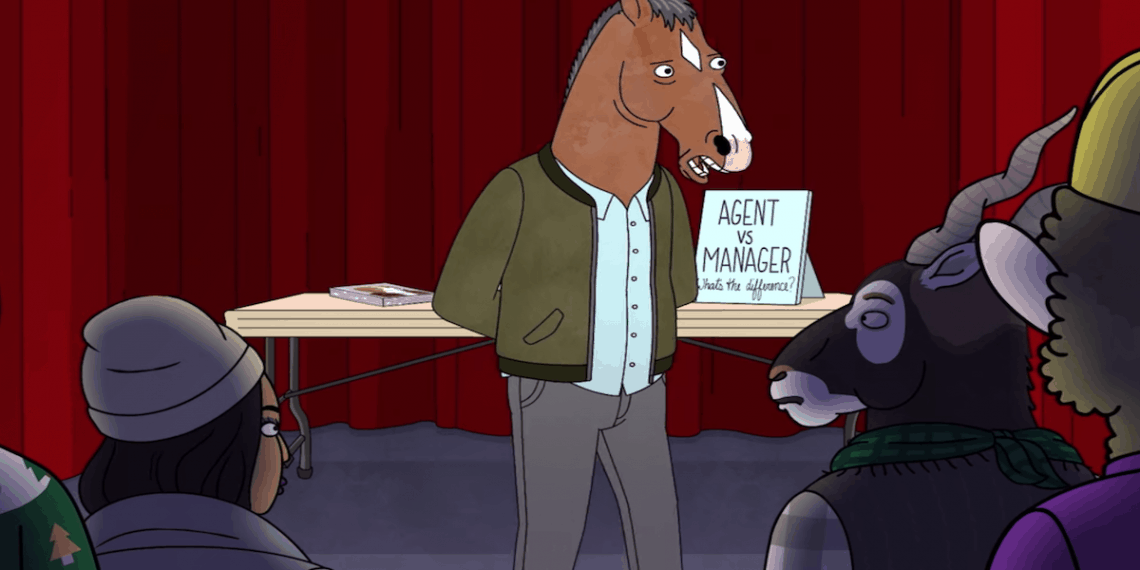 For the past six seasons fans loved Bojack Horseman, but this dark comedy finally came to an end. With a show that addresses so many dark topics, while also maintaining absurd and hilarious storylines, it is hard for many fans to say goodbye. But luckily the Bojack Horseman season 6 ties all the strings together beautifully. Throughout the season we see the growth and healing of almost all the characters, as they go into the next phase of their lives.

If you still haven’t seen it, check out the full series on Netflix. Or if you are already done and need to move on, check out our article on upcoming tv shows.

This show has never shied away from confronting taboo topics head on. So much of the story centers on depression and addiction which the writers confront directly. Bojack Horseman season 6 starts with him struggling in therapy, refusing to progress, accepting his addiction, relapsing, making mistakes, fixing them, all with brutal honesty.

Important coverage is not only in terms of depression and addiction; the show addresses topics that most shows avoid. Todd is one of the only asexual characters on television, and in the final season we see him find a healthy relationship. In a previous season the show very openly discusses asexuality to give accurate representation as we watch Todd come to terms with his sexuality.

These are just a few of the topics broached in season six and throughout the series. Let’s not forget other topics such as: rampant sexual misconduct, abuse, suicide, and abortion just to name a few. This show may be a comedy, but it has excellent coverage of serious issues.

Though Bojack Horseman follows the story of an extremely toxic man, it’s the women who come out on top in the end. Princess Carolyn, after years of trying to have it all, finally finds equilibrium in her work life balance. Diane learns to control her depression, and can finally enjoy writing without a constant need for negativity. Mr. PeanutButter realizes he needs to stop blaming women for his problems and focus on his own internal problem. The season highlights the accomplishments of the female characters and their growth over the past six seasons, with special attention to the way women get treated.

Bojack’s character never rapes any women, but his ongoing discrepancies with women frustrate the viewer. These indiscretions come in a variety of problematic forms: after he strangled his costar, Gina, who he slept with, he escaped any form of punishment; after he slept with his former costar, Sarah Lynn, whom he was a father figure for on television, he gave her heroine which lead to her death; he slept with the head of his fan club; in trying to escape the real world he took a teenage girl to prom, and these are just some of the problems. While the show criticizes individual indiscretions as they arise, the final season criticizes Bojack’s larger trend of abuse.

All comes to a head in his R. Kelly-esque TV interview, where Bojack lashes out after being questioned about his long string of suspicious circumstances surrounding women. In these days of condemning Bill Cosby and Harvey Weinstein, the show certainly doesn’t let Bojack off the hook. Though the audience sympathizes with his character in many respects, he’s also deeply unlikeable. The audience isn’t supposed to sympathize with Bojack’s actions, even when they sympathize with his character as a whole.

Shortly after his interview, Bojack goes to a frat party, demonstrating his return to his old patterns of behavior. The show denounces Bojack’s actions in this much needed time of condemning sexual violence. The tone of the show focuses on the women in Bojack’s life, and the damage he has done to them.

Despite being the protagonist, he is not the character who garners empathy at this moment. His patterns of sexual violence get called in to question, after avoiding punishment regarding individual instances for years.

An ending to a television series answers the question “What story are we telling?” For Bojack Horseman it could be the story of a recovering alcoholic, or the entertainment industry and the struggles of living in L. A., or regaining former fame. With a complex of issues to tie together at the end, it can seem impossible to find one satisfying ending.

So why stop at one? Like the unforgettable ending to La La Land, the last few episodes of Bojack Horseman allow the audience to experience their catharsis through a variety of hypothetical endings.

Princess Carolyn marries a wonderful and loving man, but at her wedding she dances with Bojack and the audience imagines, for a moment, that they ended up together after loving each other all these years. Diane has one last moment of being the angry writer in L. A. like she was at the start of the series before returning to her loving husband and happy life in Texas.

And Bojack, of course, gets a whole episode dedicated to his death. This dream sequence tracks the thoughts in his brain as he slowly drowns. He watches all the people who already died walk into the void, and realizes he is dying. But while a tragic death would be a fitting conclusion that would end his constant misery, it is not what he gets. In being saved, going to prison, and being forced to start over we see this is just another step in Bojack’s life. Bojack Horseman season 6 (and the show as a whole) isn’t a story about a life, it is a story about life. This is one more step in his struggle with addiction and depression.

The final moments of the show close on him and Diane just sitting together in a Graduate-esque conclusion. They don’t know what’s coming or what anything means, they are just people existing together.