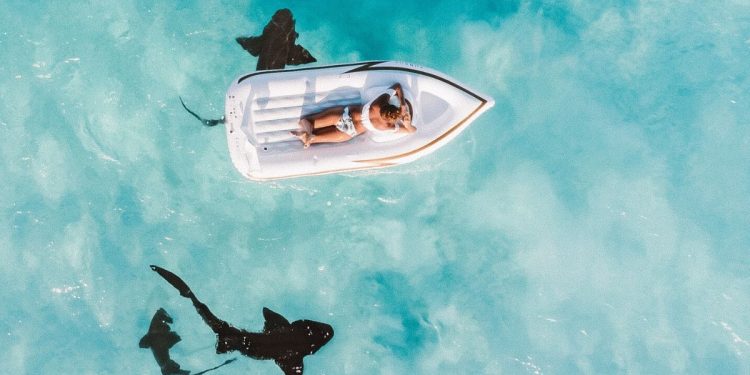 Did you know there is a word for fear or paranoia towards sharks? The word is “galeophobia” and it can affect people who are in the presence of sharks from a safe distance say like in a boat or while visiting an aquarium (strange). If you are familiar with Tommy Wiseau’s cult classic The Room, you will have to catch his latest, a shark movie called Big Shark where firefighters save New Orleans from killer sharks. The film has yet to be released, but here is a link to the trailer and it’s an oh boy.

Bait 3D is an Australian-Singaporean horror flick, featuring of course sharks. A freak tsunami occurs and people are hunted and plucked off one by one by a great white shark. In between chomping, there is the B story or love story between Josh and his former girlfriend Tina. The film is one of those it’s so bad, it’s good. Overall the acting is good , and there is enough suspense and twists for a silly movie night. It’s a rare occasion where the 3D aspect is actually an enhancement to the experience.

Who can forget the summer of 2013 when the Syfy channel released the shark movie, Sharknado? You guessed it, “sharknado” is the portmanteau of the words shark and tornado. Because the only thing more terrifying than sharks in the ocean, is a cyclone of sharks on the Santa Monica coast. It’s a guilty pleasure horror comedy with five sequels! The franchise has some A-list and D-List celebrity cameos with the likes of Ann Coulter, David Hasselhoff, Billy Ray Cyrus, and Anthony Weiner.

The Reef is another Aussie shark horror movie. Fun fact, the location with the most shark attacks is not Australia or South Africa. The most reported attacks take place in New Smyrna Beach, Florida. The Reef is a sailing adventure to Indonesia gone awry. When their boat capsizes, friends attempt to swim to the nearest island but are forced into a real life pool game of sharks and minnows with a calculating great white shark.

See Also: The Big List of Surfing Movies You Have to See if You Love Catching Waves

This shark movies was loosely based on the 1997 book Meg: A Novel of Deep Terror by Steve Alten. Known as the megladon, the once thought extinct 75 foot long shark, surfaces from the bottom of the Pacific and reeks terror. Actor Jason Statham fighting against a two million year old beast is Hollywood gold. There’s a model of a megladon mouth at the American Museum of Natural in History in DC.

The last thing you ever want is to confirm: you shark fears are valid. Open Water is based on a true story ( yikes.) The film is the tale of a couple who go on a scuba vacation in the Bahamas and are left by their scuba group. The real life couple, Tom and Eileen Lonergan, who went missing while scuba diving on the Great Barrier Reef in in 1998, were never found. Their diver message board was located and had asked for help.

Scuba divers going missing in groups is not all that uncommon. So if you are planning to go, make a good impression on your captain. You don’t want to be forgotten and left behind! On a side note, Adrift (2018) is another good survival story on the water based on real life events. However, it is sans sharks.

Ever wanted to go cage diving with a bunch of sharks? Well, I guess actress Mandy Moore is that kind of thrill seeker. In 47 Meters Down, two sisters vacation in Mexico and partake in a scuba diving excursion where people are submerged in shark infested waters, but with the protection of a cage. However, things go terribly, terribly wrong when a a great white breaks the cage, and the sisters are plummeted 47 meters down with a limited supply of oxygen. The sequel 47 Meters Down: Uncaged (2019) features a whole new cast. Both films were money makers. Despite the plot and genre being predictable, these kind of survival flicks will have you on the edge of your seat.

Deep Blue Sea is one of the better high concept shark movies. In this flick, science and progression are the real monsters. Character Dr. Susan McAlester alters the sharks’ brain DNA in her efforts to find a cure for Alzheimer’s disease. The end result is that the sharks are smarter than humans and then escape the research pens and start attacking humans. (Major my bad moment.) Samuel L. Jackson also stars in this shark movie hit.

Personally, The Shallows is probably my favorite movie of this genre. Gossip Girl, Blake Lively, showcases some major acting chops as she fends off a great white, while jumping from lily pond to lily pond in open water, so to speak. The plot is very similar to The Reef. However, this cinematography of this movie is GORGEOUS. It was shot in New South Wales and Queensland, Australia and was directed by Spanish horror film director, Jaume Collet-Serra.

Blake’s character is medical student Nancy Adams who decides to go on a sporadic trip to Mexico, while grieving her mother’s lost battle to cancer. She’s a surfer with medical expertise, the odds of surviving a hairy situation with a shark could be in her favor. *Spoiler, a great scene involves a suture technique that would make MacGuyver proud. Blake Lively had to get in insane shape for this film. You can attempt to her workout routine here. Also, be sure to read our article for some music suggestions, for your next tough workout.

This list would not be complete without Jaws, the most iconic shark movie of all time because it isn’t really about shark attacks… If you don’t already know, the plot unfolds when a woman is killed by a shark off the New England coast, while skinny dipping. The police want to close the beaches, but the mayor is dead set against it because it would be bad for tourism (shock). So an Ichthyologist ( marine biologist) and a sea Captain embark on a vigilante effort to track down and kill the beat. It’s loosely based on Peter Benchley’s 1974 novel of the same name.

This Spielberg classic is as scary today, as it was in the 70s. This summer block buster was made before our era of special effects. It’s a psychological terror playing on a very natural fear of sharks with some cinematic shock moments. You don’t even see the shark until the very end! As Alfred Hitchcock said, “There is no fear terror in a bang, only the anticipation of it.” There are multiple sequels.

Why We Love the Final Season of 'bojack Horseman'