Joe's Pizza is one of the premier locations in New York City for amazing pizza. 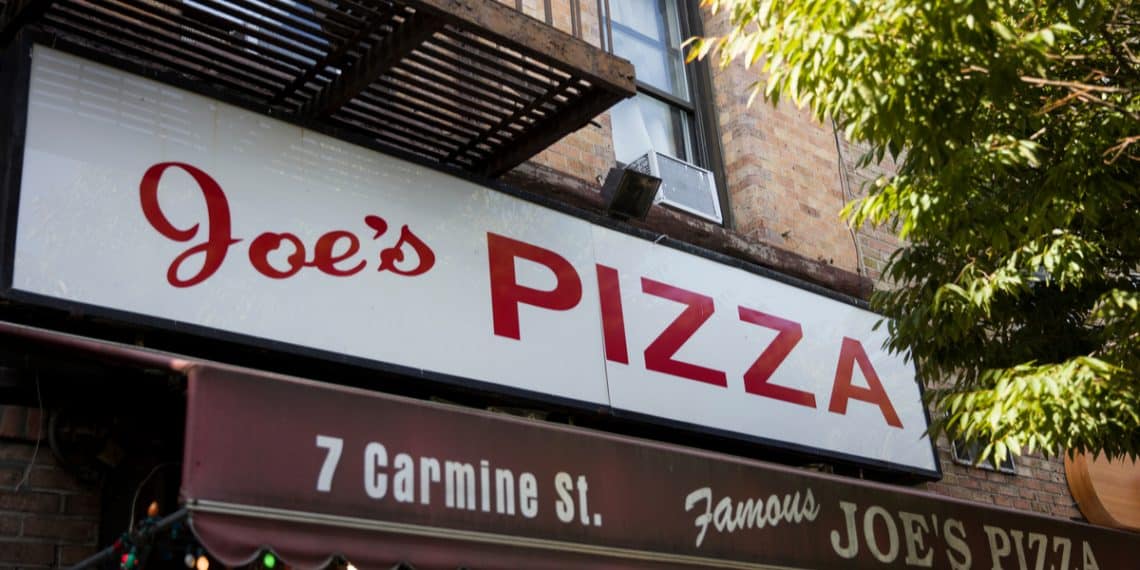 It’s no secret, New York City has some of the best pizza in the world, if not the best. While there are many spots around the city that you have to visit to get that real new york slice, one of your stops has to be Joe’s Pizza. It makes my list of the top five best pizza joints in NYC, so it should definitely blow your mind.

With five locations in New York, you have NO excuse not to visit. Here are our top seven reasons for visiting this pizza haven.

Everyone from Diddy, to Kendall Jenner, to Jimmy Fallon have patroned one of Joe’s Pizza locations. All of your favorite celebs are obsessed with Joe’s pizza.

No matter how much fame you have, pizza is still pizza. In other words, if JLo isn’t too bougie for Joe’s, then neither are we.

Pictured above is Joe Jonas showing some love to the namesake pizza restaurant.

2. Joe’s Pizza is located in the Heart of Greenwich Village.

Yes, the Village! The place where artists and musicians alike were inspired in the 50s, the 60s, and even today.

Joe’s Pizza’s original spot is located at 7 Carmine Street. That is to say, it’s just a short walk into Soho, or FiDi, or the Lower East Side. So, since it’s in the center of downtown Manhattan, you can feel like you’re in the center of the world.

It’s filled with bookstores, comedy clubs, record shops, and everything you can imagine to visit and keep you busy. After that, you can even get pierced if you would like!

So grab a slice and get lost walking down brownstone lined streets, and imagine you are Rachel from Friends.

A lot of pizza joints in NYC only allow you to buy pizzas by the pie, which is too much for one person. I mean, I could do it, but I don’t want to make any assumptions about you.

At Joe’s, you can order a slice or two and go sit on a bench in Washington Square Park. That sounds like a perfect afternoon, if you ask me.

4. The Founder of Joe’s Pizza, Joe Puzzioli, Immigrated from the Pizza Capital of the World.

That’s right, Naples, Italy, the birthplace of pizza! After establishing roots here in the 1950’s, Puzzioli opened Joe’s in 1975 and created a legacy that has spanned across continents.

The pizza spot is owned by the Puzzioli family, establishing itself as a family business.

Every employee is personally trained on how Puzzioli made his original pies when they first opened. Most of the staff have been working there for decades.

A loyal crew means a loyal pie that’s gonna be delicious every time you visit.

5. The Pizza is Freaking Amazing.

Listen, this is a valid reason. Think of all the pizza you’ve had in your life. I can’t remember most of it.

I definitely can remember getting a slice from Joe’s two summers ago and then going to a comedy show pre-covid.

It’s memorable. Frankly, it’s a detail you’ll include when you recount your trip to NYC to a friend or a family member.

6. It’s an Iconic Institution – a Piece of NY History.

From it’s opening in 1975, Joe’s Pizza has built up the hype it has today, with lines out the door and all.

Maintaining the same sauce recipe and standard toppings that they had when they first opened, Joe’s Pizza remains true to its origins.

They are not known for experimentation in the kitchen, and I prefer that. So, if you’re looking for artisanal wacky topping pizza, you might want to head to Brooklyn, probably Bushwick. Yes, I mean Roberta’s.

In comparison, Joe’s is about the basics. It’s the golden standard that’s a relic from the past that remains popular and has inspired a generation of pizzaiolo’s around the city and the world.

A lot of the most famous pizza spots in New York are not cheap. I mean thirty dollars for pie is a bit ridiculous in my opinion. The margins are very low in pizza, and at that price, it feels like a cash grab.

Joe’s Pizza, on the other hand, prides itself on its consistent prices. Slices start at almost three dollars, which is a STEAL considering the quality of the pizza.

Sometimes, we just want a nice cheese pie for twenty two dollars. And at Joe’s, that’s a given.

Joe’s Pizza is an original. From it’s story to the beautiful location, it’s an authentic slice of New York and it’s worth a visit.