Want to know more about Emily Trebek and the secret hobby she shared with her father, Jeopardy host, Alex Trebek? Read on for more information. 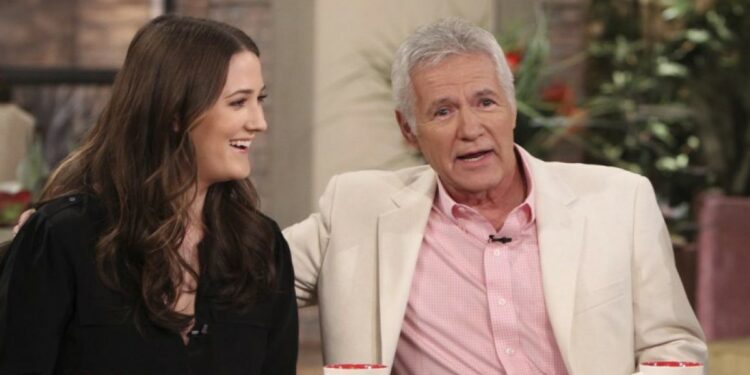 The Canadian-American television personality and game show host, George Alexander Trebek, had three wonderful kids; Nicky, Mathew, and Emily. While many know him as the fun host of the iconic game show Jeopardy, he was also a devoted father and husband. Alex shared a special bond with his children, but perhaps the best one yet was shared with his daughter Emily Trebek.

A daughter’s bond with her father is always a special thing. Even more special is when they have something they mutually like and bond over. When he was alive, fans got a glimpse of what a tightly knit family Alex Trebek had. He was a family guy in every sense of it.

The father-daughter duo was one to marvel at, and even after his passing, we continue to see just how deep their bond was.

Emily Trebek is the youngest and last-born daughter of Alex Trebek and Jean Currivan. She was born in 1993 in Los Angeles, California, where she grew up with her older brother Mathew. She also has an adopted sister, Nicky, who her father adopted in his first marriage to Ellaine Callie.

She went to school at Campbell Hill in California and later joined Loyola Marymount University. While she grew up watching her dad appear on shows and loving what he did, Emily chose to pursue a career of her passion instead. She enrolled for a bachelor’s degree in Design and Architecture, which she completed in 2015 and graduated.

The talented young lady turned her passion for flipping houses into a fully-fledged career. She is a real estate agent and has made quite the name for herself through some of the high-profile houses she has managed to close. Among her most notable accomplishments in the real estate business is closing on a $1.5 million home in Culver City and another in West Hollywood for $1milllion. Given her track record, we can undoubtedly say she is one of the best real estate agents in the game.

She owns an interior design studio called E&S interiors in Los Angeles; she clearly has a good sense of style. Emily has also made a couple of appearances on TV and various shows alongside her father Alex and brother Mathew.

On her relationship with her father

As mentioned earlier, Emily Trebek and her father were a very close pair. Emily has shared an insight into how her relationship with her dad was growing up through her social media pages. She has revealed that she often used to work with her father, which was one of her favorite things to do. She would spend time coloring and drawing pictures on set while her father worked and would hang them all over his office as decoration.

One of the fondest things she recalls is drawing her father a ‘World Greatest Dad’ sign, something her dad loved so much that he hang it on the front office of his door for nearly 18 years! How adorable is that! Emily shares that she is most proud to be her father’s daughter, and he is the most supportive and caring father there is.

The Secret Hobby They Shared

By now, you already know that Emily has a major thing for flipping houses; I mean, she practically got a degree just for that. Emily shared about her passion with her father and being the most supportive and caring dad that he is, he was more than willing to help her daughter. Emily shares that she has always wanted to be an architect growing up; after she graduated with a degree in Design and Architecture, she wanted the first house she flipped to be special.

Emily requested her dad to help her flip her first house. Since Alex Trebek takes his father’s role seriously, he showed up at the house and was all hands-on – looking into crawl spaces, checking the electrical panels, and ensuring the water heaters were working. Her father ensured that all the places with hidden costs were checked out and in perfect condition.

From then on, it became their thing. Emily Trebek and her dad tour houses together and even decide on which housing projects to take on. Alex Trebek had always been a natural fixer; he loved to fix everything he could around the home. This set of skills came in handy in helping Emily with renovations. Her dad was also a great advisor, she would consult before selling a house, and he would also appraise the property for any maintenance.

Alex Trebek sadly passed away in 2020 after a four-year battle with pancreatic cancer in his home in Los Angeles. Emily Trebek continues to keep his memory alive by sharing amazing things about her dad, the good memories, and also celebrating him on special occasions such as father’s day. May his soul continue resting in peace.

What’s Tom Hanks’s Daughter Elizabeth Hanks Been Up to Lately?

Why Did Crystal Reed Depart from Teen Wolf in Season 3?