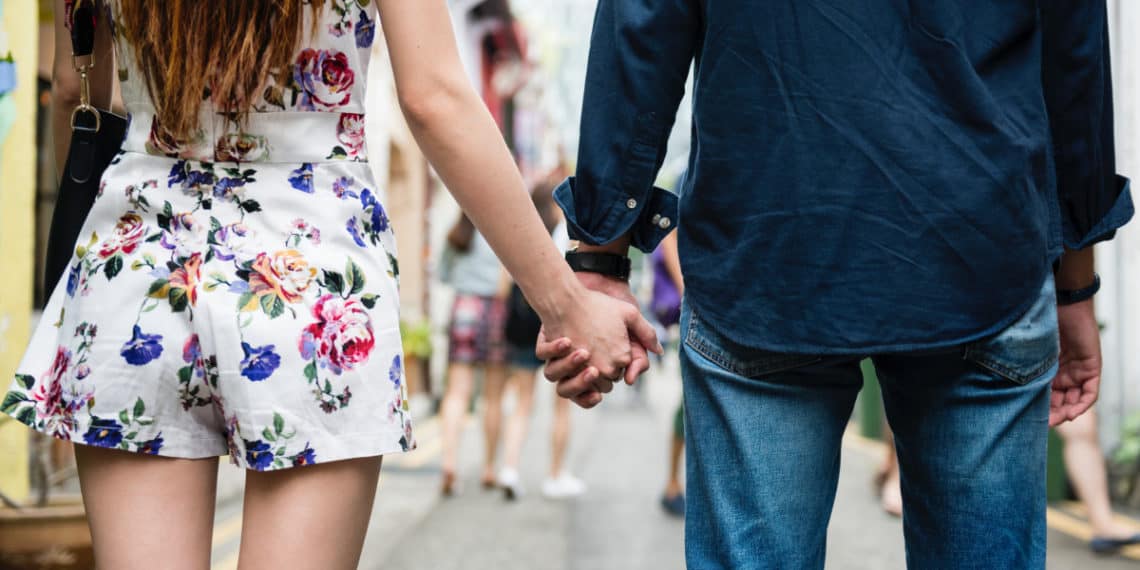 Alright, let’s get real about it: when the word “feminism” gets brought up in conversation – it’s basically met with an uproar of mixed feelings.

I mean, can’t you just hear it? Echoes of “equal rights for all!” and “the future is female!” Immediately followed by echoes of “feminism is ruining modern families, destroying men, and ruining some other third thing I can’t accept was never that great to begin with.”

Yeah, it may be a bit too clear how I feel about feminism with that last quip. Oh, well *wink, wink*.

But, regardless of how I feel about it. There’s no denying that it’s a serious issue to be addressed in a relationship.

I mean, regardless of how even you feel about it, your guy’s attitude towards it can still say a lot about who he is and how he views women. It’s not something to just ignore because you’re too scared to bring up an uncomfortable subject.

And, if you’re already a feminist, it can be hard to even approach the topic because it’s likely to break you two up if he’s not. I mean, I won’t pretend it wouldn’t bother me if my guy wasn’t a feminist.

It’s important to know if him not wanting to be called a feminist is rooted in misogyny or a mere problem with the word itself. Here are a few things to consider if your man won’t call himself a feminist:

The range of not treating you equally can be as drastic as treating you like a sex object who can’t think for herself to just expecting you to follow strict gender roles.

Sure, it’s nice to be treated like a princess or a sexy goddess, but is he doing it because he likes/loves you? Or, is that how he thinks women need to be treated for some sexist reason?

Unfortunately, if he won’t call himself a feminist it may be time to ask him how he sees you. Does he view you as a woman he’s falling in love with? Or, does he just see you as a sex object to be conquered? Is he expecting you to do all the cooking, cleaning, and child-rearing if the relationship gets serious? Is he going to just expect you not to work if he marries you? Does he expect you to fit into his “girl box” of expectations about how you should behave? These are important questions to ask before the relationship blows up in your face.

2.Does he just not understand it?

Let’s be real about it, a lot of men don’t think they’re a feminist because they haven’t bothered to look into it. This is understandable. I mean, a lot of women haven’t even bothered to investigate it because “feminism isn’t needed anymore” (give me a break, right?). Some men assume that feminism is only for women and only affects women. Therefore, they don’t think they even have to know what the actual definition is.

According to Disctionary.com, a feminist is just someone who “[advocates for] social, political, legal, and economic rights for women equal to those of men.” So basically, if you think men and women should be equal and have equal rights. Hate to break it to you, but – you’re a feminist, sir.

I think a lot of men have a problem with the word because of the things they’ve been taught are associated with it. Like, it being only for women or the dreaded “feminazis”. Therefore, it’s important to evaluate if he doesn’t want to be called a feminist because of the word itself, or because he doesn’t respect you or stand up for your rights as a woman. It’s okay to be uncomfortable with a word (kind of), but it’s NOT okay to not support and respect you.

3. Is he just not paying enough attention?

Some people don’t like to call themselves a “feminist” because of the slanted media attention towards it. A lot of times the media (especially the conservative media) portrays feminists as “man-hating”, “angry lesbians”, or, at best they portray feminism as “only a women’s issue” that is “no longer needed”. But, literally, none of that is true. I mean, seriously. Look up a word before being so biased.

Frankly, if he doesn’t think that men and women should have equal rights – it may be time to evaluate whether he will actually make a good partner long-term (I’m betting – not so much). But, being influenced by a negative portrayal of feminism is a real problem and concern. I know my partner was influenced by the negative media portrayal of feminists and didn’t want to be associated with that. So, it understandably took him a while to call himself a “feminist” (even though I jumped on board as soon as I read the definition).

I tried to be supportive of this because I know it even took me a while to be open about the fact that I was a feminist because I was raised in a conservative home that never talked about it in a positive light. All of this made it make sense to me that it would take him longer (especially since he was also raised this way). But, after I took a Women’s Studies course when I was getting my BA and we talked about the issues I was discussing with my classmates, we discovered that we BOTH had always been feminists.

Unfortunately, people don’t pay enough attention to both sides of arguments before developing their own “opinions”. But, since this is true, your man may merely be influenced by his upbringing and surroundings to think feminism is somehow a bad thing. It’s important to find out if it’s that, or if he really is anti-women and anti-equality.

4. Is he influenced by toxic masculinity or actively perpetrating it?

If he’s merely influenced by the negative affects of toxic masculinity, he will simply have biases against the word. However, his actions will still show that he is a feminist (even if he’s in denial about it). For example, he will still treat you like a person who is equal to him, period. He won’t talk down to you. He won’t expect things from you based on the fact that you’re a woman. And, he will show you respect as a person. But, he will display worry that being a “feminist” will make him “weak” or “feminine”.

Whereas, if he is actively perpetrating toxic masculinity – these things won’t be true. He might be way too caught up in “being the man”. He may not show you enough respect and when he does, he might think he deserves to be rewarded in some way. He might have different expectations for you simply because you’re a woman. For example, I’ve had it implied to me that I shouldn’t curse just because I’m a woman and “men don’t like it”. Yeah, fuck that!

5. Does he just care WAY too much what people think?

I feel like this is a pretty common one. Your guy might actually be a full-fledged feminist that stands up for women and advocates for respecting them. But, maybe he cares too much what his buddies think to ever call himself a “feminist”.

A lot of men think that only women can be feminists or, that it’s not “manly” to be called a feminist so they deny it even if it’s true. While you need to be sensitive to these feelings, there is also something to be said for your man caring too much about what other people think. I mean, does he care more about what other people think rather than what you think and what is right? That’s not cool.

Maybe it’s time to explain to him how things like ending toxic masculinity and rape culture with men standing up to the men perpetuating it.

Going Braless Is Good for the Mind, Body, and Soul — Here’s Why