A crash course on some Greek (and Disney) mythology 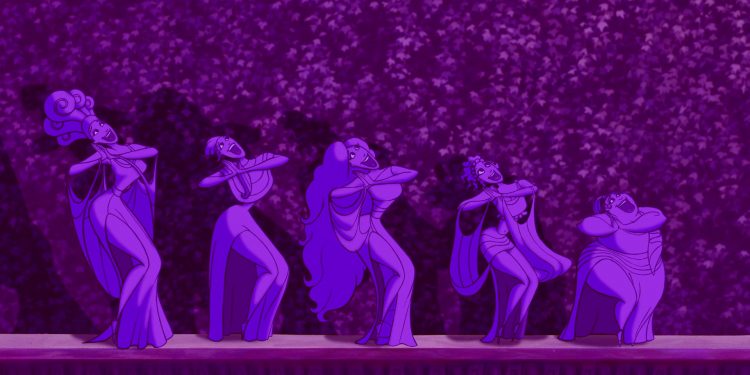 Everyone knows The Muses in Hercules are the best part of the film. They’re fun, sassy, and great storytellers. From the moment they seize control of the movie, de-throning gloomy, serious voice of “Bobby,” you’re promised a glorious romp through Greek mythology. But who are The Muses? What do they muse? Are they figures in the original stories of Hercules? Could they even be *gasp* related to our hero?

Additionally, the designs of the five muses are pretty similar—none of them seem to embody their Muse. In the first shot of the movie, the Muse of comedy can be seen with an acting mask, and the Muse of history has an unfurled scroll. Beyond that, they all wear a white robe and have the same dark hair. Their designs are pretty great and work well as an entire unit, but a chance was lost to go a little further so they embodied their Muse more fully and could be better told apart by audiences.

With how little Calliope says about each of them, “We are the muses / Goddesses of the arts / And proclaimers of heroes” it doesn’t really feel like Disney is that interested in making sure we know who the Muses are.

See Also: Do You Want to Know Why Alexa Chung Is Our Favorite?

Is It All The Gospel Truth?

You might be disappointed to learn that the Muses don’t actually factor into the stories of Hercules. The Muses have their own tales. They are the children of Zeus and Mnemosyne, Titan goddess of memory. The Muses and Hercules share a father–something conveniently not brought up in the movie, or else Disney would have to deal with the truth of philandering Zeus.

The Muses are shown in the movie to come to life from statues or art. This is actually one of their powers, along with immortality, and inspiring people. Unfortunately, we don’t witness any displays of their other skills. Perhaps there’s a draft of the movie somewhere featuring the Muses bursting onto the scene and compelling someone into song and dance to help Hercules.

The Muses also possess a wicked edge. In one story, a singer named Thamyris challenges them to a singing competition. The Muses crush him and then blind him and rob him of his singing ability in punishment. It’s hard to imagine the lively, feisty cartoons ever doing something like that.

While the Muses are recreated with a modern flair to them, this version of Hercules is also an amalgamation of his story. For example, his love affair with Meg is made up (rip Meg, the greatest of us all), he is not a natural born god (he is a demi-god, the child of Zeus and a mortal), and he doesn’t face all twelve trials or monsters like he is famous for. These don’t make the movie any less awesome, but it is interesting to compare it against the original myth.

In conclusion, it is determinately, not the gospel (or pagan) truth. But it’s still fabulous.

One of the reasons Hercules is a great film is its music. The Muses feature in most of the songs, either as the main singers or as a back-up chorus. Each musical number has some fun nuggets for each of the Muses.

In Zero to Hero, the Muse of tragedy has the drama/tragedy mask over the scene of the play where Hercules defeats the hydra. The Muse of comedy is also strutting her stuff by chiseling a statue to “Hunkules” and enjoying the action figure, playing two trumpets at the same time with furrowed eyebrows, and bashing the Muse of history on the head with a vase (pronounced vahse). Iconic.

Peep the video below to see five women performing Zero to Hero in a storyboarding session. Please note that they are not the voice actresses. As you can see from their dancing and expressions, the Disney team clearly took inspiration and a cue from them on how to bring the Muses to life.

The first and last shots of the movie are the Muses in a Grecian pottery piece alongside Hercules. Immediately, these women are shown to be as important and valuable as the main character. They are a framing device for the story and break the fourth wall by talking to the audience, but they are clearly lead characters in their own right with how the movie features them alongside Herc from beginning to end.

The Muses are reinterpreted as Black gospel singers with different hairstyles, showing off different aspects of Black culture. The Muses are confident, proud, and phenomenal. Their musical talent is apparently obvious, plus they strut their stuff with impressive dance moves, too. Typically, the Muses have predominately depicted as white women. This change is a welcoming one that celebrates Black women, their culture, and music, and elevates it to god-like status.

Old Stereotypes and The Future

The Muse of comedy stands out from the other Muses based on her physical characteristics. The design of Thalia as a short, chubby woman, reinforces stereotypes that women are either beautiful in the traditional patriarchal sense of tall and thin, or funny. It would have been great to see the Muses with other body types instead of only Thalia. The Muse of comedy is still absolutely beautiful and as fabulous as the company she keeps. However, Disney’s design here was clearly intentional.

Women are often told they’re “too pretty to be funny.” Or, they don’t need to be funny if they’re pretty, since humor is a way to get people to like you. The implication is beautiful people are automatically accepted based on their appearance.

“You’re too beautiful to be funny. It’s not your fault, you never had to compensate for anything.” -Leslie to Ann in Parks and Recreation

The writer Fran Lebowitz said, “The cultural values are male; for a woman to say a man is funny is the equivalent of a man saying that a woman is pretty.” The internet is full of articles from 2014, 2015, 2017, 2018, and 2019, and long before then, dissecting the awful stereotype.

As fabulous as the Muses are, there is definitely space to improve upon by varying the body styles, and cutting the sexist stereotype that the only funny women are fat women. And fat women are beautiful too, regardless if their humor is universal or not.

In the upcoming live-action, hopefully this can be addressed to create a more inclusive, realistic picture of women, music, and comedy. Young girls and grown women deserve to see themselves represented in positive lights.

Peep the video below to see the Public Theater’s stage musical of Hercules for a few glimpses of the real-life stars who brought the Muses to life in Central Park. Maybe the future movie will take some inspiration?