Steve and his viral expressions are hilarious. Find out more about the coach. 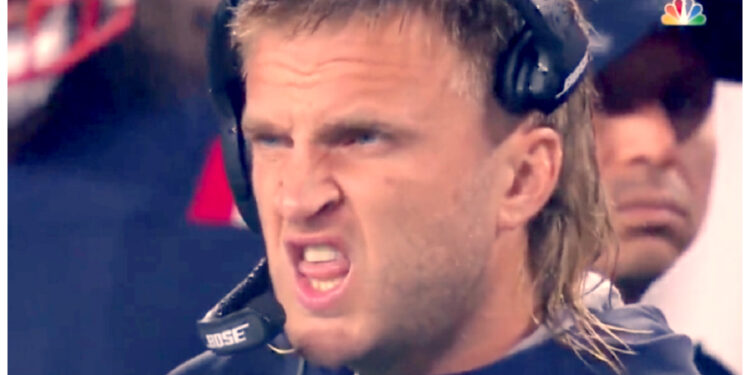 Steve Belichick who is known as Stephen Belichick is an American Football coach. He is currently coaching the New England Patriotsof theNational Football League(NFL). He always gets limelight on the news for some reason.

Whether it’s his interest in losing being the coach or his viral expressions. He has become a magnet for NBC’s camera. Steve Belichick is a constant subject amongst football daily news. Moreover, let us look at some facts about Patriots Coach Steve Belichick.

Born March 25, 1987, in Ridgewood, New Jersey. Steve was born just after his father Bill won his first Super Bowl title. He won by serving as defensive coordinator of the New York Giants.

He attended the Rutgers University

At Rutgers, he played lacrosse. He was a long-snapper under Greg Schiano.

He is son of Bill Belichick

Steve Belichick is one of the sons of Bill. Bill is currently the head coach of the New England Patriots of the NFL. Bill is NFL’s longest-tenured active head coach. Steves’s brother Brian, also works as a safety coach.

Steve was memed to death when NBC’s caught his bizarre expressions on camera. His brother and father even joked about him on social media. He got worthy pf praises and compliments from his dead. He surely got distracted from the expressions.

For the 2019 season,Brian Floresbecame the new head coach of the Miami Dolphins. Belichick assumed defensive play-calling duties. He was previously held by Flores, while also operating as the team’s secondary coach. In 2020, it was said that Steve would move from safeties coach to outside linebackers coach. His brother Brian would take over at safeties.

Recently He was in the News about his Coaching Interest

According to patriotswire.usatoday.com, a question popped up in the article. But at what point will Steve start getting head coaching interest?.

Steve is calling (at least some of) the New England Patriots’ defensive plays. He gets help from Jerod Mayo, who is the inside linebackers’ coach. And Bill Belichick seems to have a hand in the play-calling. And the pre-game preparation on defense. It’s a group effort with Steve seemingly at the center of it.

Steve is Married and has 2 kids

He is married to his sweetheart Jennifer. Together they have a wonderful son and daughter.