Read more about Cindy Lou Who and the actress that portrayed her. 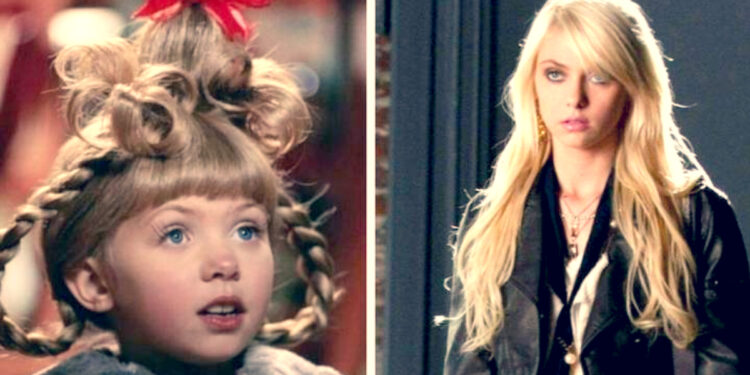 Cindy Lou Who is the sweet and tiny character of the storybookHow the Grinch Stole Christmas!. She was the main lead protagonist of this storybook. Cindy Lou Who was portrayed by Taylor Momsen.

Today, Taylor is a popular singer, songwriter, actress, and model. Who doesn’t remember the dainty rendition “Where Are You Christmas?”. It was sung by Cindy Lou Who and it has been more than 20 years.

People have been still awestruck by this melodious song. A lot of time has been passed since the movie’s release. Fans have been wondering about what the Cindy Lou Who girl, Taylor, is doing now. But before that let us take a look at the timeline of the character Cindy Lou Who.

In the Broadway musical, Cindy she was 6 years old. She has 4 siblings Boo, Danny, Betty, Annie Who. She was first seen in It’s The Thought, Who Likes Christmas, I Hate Christmas Eve, and Whatchamo. While other children were dressing in red and white, she used to be in pink gowns. She is clearly different from other children. This cute girl is played along with other two girls every Winter at the Olde Globe in San Diego.

Her blonde yellow hair with blue eyes gives her an innocent cute look. The bob-cut hairstyle sometimes styled with messy braids always looks adorable. Her looks are still refreshed in the fan’s mind.

How the Grinch Stole Christmas!

In the original book and the animated adaptation, Cindy-Lou Who comes out of bed for a drink of water. She finds the Grinch. Disguised as Santa Claus, stuffing her family’s Christmas tree up the chimney (in the 1966 special, she also wakes up when she noticed a red ornament rolling to her after it fell off the tree).

Mistaking him for Santa, she innocently asks him why he is taking the tree. The Grinch, sensing innocence in the young girl, covers up his theft by lying to her, saying that there is a broken light on the tree and that he was taking it to “his workshop” to fix the problem and then return it on Christmas Day when she wakes up.

Cindy is a young, cheerful, energetic hopeful young girl who believes in the spirit of the Christmas festival. Her smart and cunning nature is what captivates people. To do something simple, she brings up sophisticated plans. This shows that she is street smart and an innovative kid.

Cindy Loy Who loves her siblings and parents. During Christmas, she knew that something is missing apart from gifts and festivities. When she met The Grinch, she knew that he had a dark past. Cindy feels bad. She shows her sweet gesture by including The Grinch to show her family and friends what Christmas is really about. Her adorable thought fascinated her family. Her character in the movie surely created many fans during that time.

Where is the Cindy girl Taylor Momsen Now?

As of now, Taylor Momsen has turned 28. She is a popular singer and has a massive fan following on Instagram. The Pretty Reckless is her band, and she is focused on performing music with her band. The group is going to releaseDeath By Rock And Roll, by next year. For now, she seems to be very different from what Cindy was. Momsen gives credit to the film for what she is today.

“The Grinch was the first time I went into a recording studio,” she told Today in a recent interview. “I’ll never forget walking into this beautiful studio with a massive console in front of me. And putting headphones on and singing into a microphone for the first time… It was such an impactful moment in my life. It made me go, I want to make music for the rest of my life. I love being in a recording studio.”

Cindy was surely an unforgettable character in the storybook.

The Most Affordable Christian Dior Sandals For Warm Summer Nights