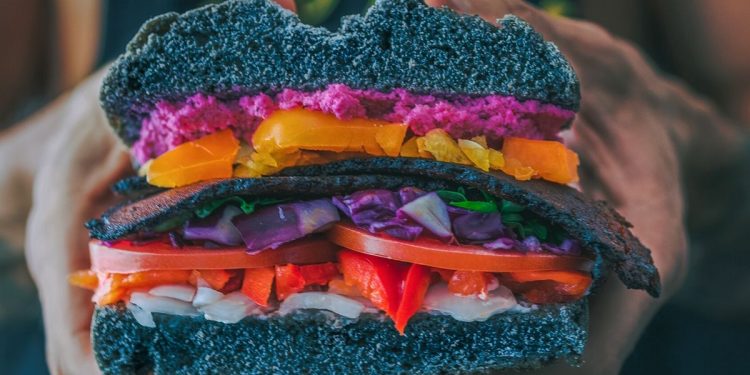 Marty’s V Burger offers great, affordable vegan comfort food. Meat-eaters will be pleased with their burgers and crabby patties. They have a mushroom steak burger and crawfish mac and cheese (yum). Also, they have some serious french fry options like their “animal style” or “chili fries.” Did we mention that they have vegan drumsticks? Consider getting a combo with a side like a kale salad or one of their vegan milkshakes. Marty’s V Burger is vegan fast food done right.

Avant Garden is a great upscale vegan restaurant located in the East Village. Sure, it’s a little pricey and the portions are small, but the food is creative and the cozy ambiance with its branch chandelier and exposed brick creates a great overall experience. Try their “Hen of the Woods” entree made with mushroom puree. Also, January is their “Veganuary,” where they promote a tasting menu.

Jajaja Plantas Mexicana is an all vegan Mexican fare restaurant located in the LES, Williamsburg, and West Village. Vegans will go ham for the vegan chorizo burrito, beet and pumpkin empanadas. They have 7 vegan tacos to choose from along with bowls and other vegan-Mexican infused entrees. Their “Chayote Fish Taco” is made with a gourd. Prices are affordable and they have plenty of fun mezcal drinks to choose from.

No worries, Spicy Moon is a 100% Vegan, specializing in Chinese Szechuan food. The cozy black lights is great place to eat your Mapo tofu or Dan Dan noodles in bliss and serenity. Portions are large and great for sharing, but keep in mind the venue is on the smaller more intimate side.

Vegans will scream for pizza at Screamer’s Pizzeria, which offers complete New York styled vegan pies. (Vegan cheese for the win.) They sell by the slice and pie. A slice ranges at roughly $4.00-$6.00. Some great slices to consider: Grandma Pie with vegan pepperoni, buffalo, mushroom, or artichoke. Their “Napoleon Dynamite” comes with tots and their “Maui Wowie” comes with everyone’s favorite pizza topping offender: pineapple. You can also design your own pizza, which is super dope.

They have a location in Greenpoint and Crown Heights. When in Greenpoint, you can grab a slice and go thrifting at Beacon’s Closet. See our article for 13 other great thrift and vintage stores you have to see.

This cash-only Ethiopian restaurant is a well-kept secret in Bushwick. They serve non-meat and dairy cuisine, perfect for vegans. It’s family-style, so they offer a great brunch. You’ll feel right at home, feasting on ground, lush pillows. Also, their coffee tasting ceremony is a real treat and they often have live music.

The best plan of action is ordering “The Feast”, which costs 30 bucks and serves two. You’ll have plenty of food to share and enough injera bread to go around. Don’t forget to take advantage of their full bar with their Ethiopian spiced margaritas and vegan alcoholic milkshakes. Seriously, what are you waiting for? Go to Bunna Cafe!

Taïm, meaning tasty in Hebrew, offers fantastic casual Israeli food and a menu that is almost entirely vegan. They have a location in Midtown and the West Village. They have limited bar seating but do offer take-out. Some of the menu options like the babaganoush and feta are not vegan, so just check the menu key. Cauliflower shawarma anyone !?!

By Chloe is a vegan restaurant in New York City with a lot of hype. They offer brunch, burgers, salads, shakes. We recommend their vegan BLT with vegan fries and maybe their kale cookies and cream ice cream ( for the gram).

Hartbreakers is a 70s inspired all vegan diner in Bushwick. It was started by the same folks for Champs Diner. Their big seller is their fried “chicken” sandwiches with options like seitan bacon, ranch dressing, or vegan slaw.

Shoes come off at the door. Hangwai is a bit of an upscale vegan eatery in Koreatown. Their website says, “A vegan shrine in another space in time.” Enjoy the kabocha pumpkin pancakes with mung beans or one of their creative salads made with kimchi, beets, and avocado. Their stone rice bowls and clay plot tofu dishes are all apart of the elevated dining experience.

Peacefood is a vegan kitchen and bakery with two locations, one in Union Square and one on the Upper West Side. The dining room is accommodating and causal, great spot for a date. They serve a wide range of food from curries, vegan crab cakes to zucchini lasagnas made with cashew cheese. Their chickpea fries are pretty tasty. It will be hard to not be tempted by the dessert display case. Vegan tiramisu or keylime pie anyone? Reservations fill up fast.

Red Bamboo is a vegan Asian and Southern food fusion. Their faux fish and mock meats are crowd pleasers. This vegan restaurant’s menu is 4-5 pages ! They have Creole chicken, barbecue ribs, Cajun shrimp, cashew chicken, Thai beef, all made with the power of soy. It’s not all fully vegan. Dairy might be used in some thing so just ask your server. However, the reviews from vegans are highly favorable despite the restaurant being not one hundred percent.

This lavish vegan tapas joint specializes in creative entrees and cocktails. Ladybird is also participating in “Veganuary,” like sister restaurant Avant Garden (#2). The vibes and salon are Victorian, so a great outing for the squad and the gram. Try the artichoke fondue for two or the spaghetti squash. This place is supper trendy and is credited to restauranteur, Ravi DeRossi. The cocktails were designed by NYC’s bars Mother of Pearl and Post Office Whiskey Bar. It’s pricey and popular, so you’ll need to make a reservation.

Modern Love is a cool and cozy vegan eatery in Williamsburg, complete with a chandelier. Their menu straddles Southern vegan comfort food and Italian. You can enjoy things like “Chick’n Pot Pie” or ” Oyster Mushroom Calamari.” Apparently, their vegan Harry Potter Butterbeer is also bomb. It goes without saying, but yes you will need to make reservations.

Blossom has a location in both Chelsea and in the UWS. There is talk of a third location happening in the West Village. It is located in a town home. Expect to shell out some dough for the experience. Could make for a romantic date for Valentines Day. Blossom has modern and eclectic entrees to choose from. People enjoy their scallops and gnocchi, and desserts like their chocolate ganache. Don’t pass up simple Caesar salads because theirs is heavenly. They also do brunch. (Hooray for tofu Florentine.)

Sol-sips is a vegan go-to centered around the Bushwick community. It sells super cheap bowls and sandwiches. In this case, you should definitely risk it for their chicken and biscuit sandwich. Sol-sips is available on Uber Eats.

This vegan restaurant is the vegan cream of the crop, so to speak. Jean-Georges’ restaurant, abcV, is one of three restaurants located in the ABC Carpet and Home Store. Needless to say, the ambiance is chill and trendy AF. The menu has gluten free and vegan options. This place is usually packed, so getting a dinner reservation can be tricky. They also have breakfast, brunch, and lunch. You won’t find any faux meats or mock foods like cashew cheese. At abcV the vegetables are presented in their truest form in a very artful way. ( Yes, this place is pricey.)

Feel like Getting Freaky in the Club? Here Are the Top NYC Sex Parties