Happy TV Shows that will make you laugh. 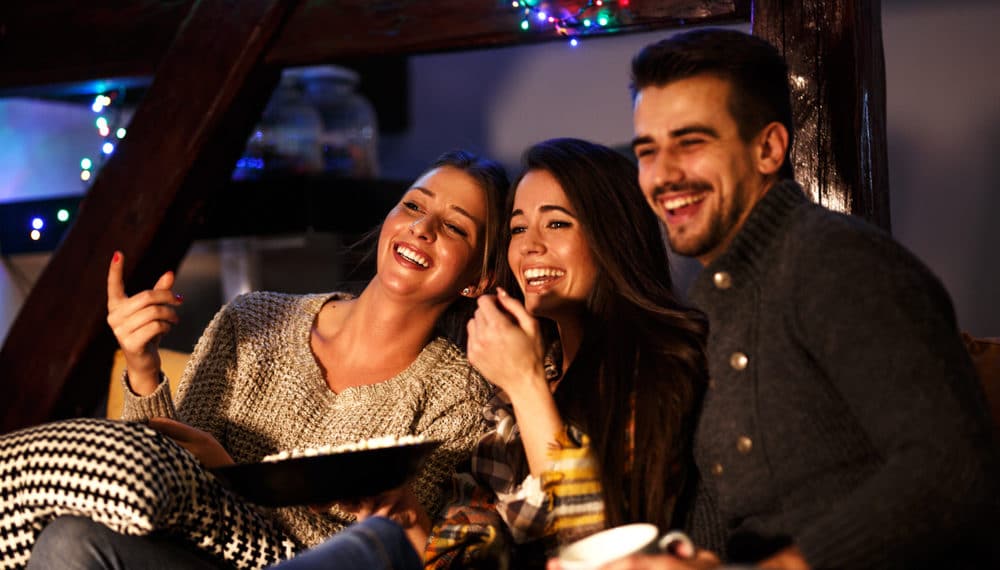 Sometimes, the only good solution to a snowy, rainy weekend or a hot, humid summer is to chillax on the sofa or cuddle up under the bedroom covers and start binge-watching some happy TV shows.

Laughter is the best medicine, so if you are tired of the drama-filled soaps and want a change of pace from the usual blow-‘em-up car-chasing who-dunnits, our list of happy TV shows that you can watch for hours without being bored are exactly what the doctor ordered.

The funniest comedy you’ve probably never heard of! This is a rich family who loses everything and has to start over. Their only possession? A town they bought as a joke- Schitt’s Creek. Seriously hysterical. And, it’s super convenient because you can binge-watch the first four seasons on Netflix.

P.S. Season 5 just wrapped, so you better get ready for that release. What are you waiting for? Make some popcorn and get watching.

This is a British sitcom that follows the story of a young man named Dylan who must go through his little black book and tell his former lovers he might have given them an STD. What could be more awkwardly humorous than that?

This happy TV show will have you in stitches as you let Netflix automatically continue on to the next episode.

If you haven’t heard of Great News yet, then you are totally missing out. This happy tv show is an odd little workplace comedy about a woman who is trying to prove to everyone, including herself, that she’s a really great news producer.

The show has a 30-Rock feel to it, which makes sense since one of the executive producers is Tina Fey. You’ll enjoy the talented cast of actors who create this humorously relatable tale.

Desperate for a job, 40-something Liza pretends to be 26 to get her dream job. Trying to hide her real age from a much younger man who wants to be more than friends, as well as her boss, is more entertaining than it sounds.

And, hello, it’s Hillary Duff! We definitely missed seeing her on our screens every night. It’s been way too long since Lizzie McGuire was a thing.

The writers for this joyful energetic show deserve an award for having the zippiest one-liners ever! You’ll love the main character Mindy, an OB-GYN who tries to be perfect at everything while fearlessly tackling every subject imaginable.

Mindy Kaling is hilarious on and off the screen, and The Mindy Project definitely showcases her funny bone.

If you have ever watched a show and ad-libbed what the characters were really thinking, this is for you. This is about a pair of male roommates in search of love, but unlike other shows, you get to hear their thoughts as well.

This is definitely a modern British sitcom through and through. And, critics agree that it’s funny as hell.

Broad City is definitely the happy TV show all NYGals should be watching. The premise centers around two Jewish American women in their 20s in NYC. Their crazy misadventures as they try to figure out life will have you in happy tears.

There is also a tour you can take in NYC that will show you the different filming locations of all your favorite New York shows, including this one. So, get watching and then definitely check it out!

Yes, it’s an old one, but still one of the funniest ones out there. If you don’t love Frasier, there is seriously something wrong with you. The sitcom follows the character of Frasier as he shares his therapeutic wisdom via his radio show, while also struggling with his own comic problems often brought on by family and co-workers.

For real, if you haven’t watched this old gem, you’re missing out on some of the best laughs ever made for TV.

Based on a show out of Norway with the same name, this is a thought-provoking comedy that will make you spit out your popcorn laughing, then cry as you pick it up off the floor.

This dark comedy show is about the delicate balance we all try to maintain between real life and good mental health, and you will get attached to every single character. And, it’s so god damn relatable. This one is both funny and moving, which makes it the perfect combination for binge-watching.