Rumors are already bad enough, but when social media comes into play, people cannot determine the truth. Find out about Kristen Bell's tattoos. 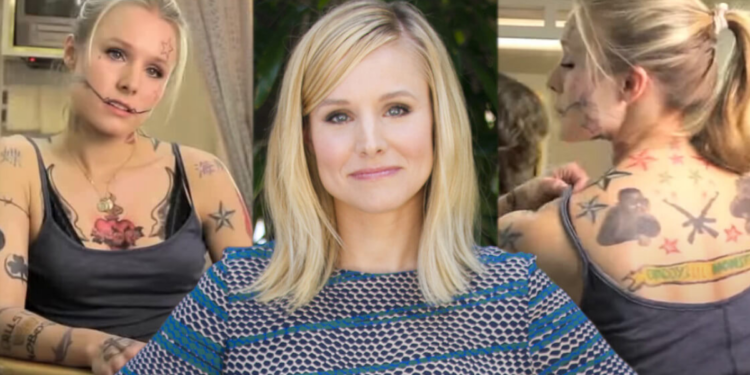 Kirsten Bell is well known as one of Hollywood’s sweethearts. After all, she is more known for some of her very wholesome roles in the Disney classic Frozen as well as a romantic comedy that has become a true classic in the genre — Forgetting Sarah Marshall. Because of her very wholesome image, people were very surprised because of the leaked pictures of her that circulated that apparently expose the unimaginable — her body is actually secretly covered in tattoos. This has understandably caused a bit of a stir online causing many to speculate whether the Hollywood actress was actually covering up her tattoos all along. So this obviously begs the question, are Kristen Bell’s tattoos real?

Has princess Anna actually been covered in ink this whole time? Let’s take a closer look!

Like all things in social media, the rumors of Kristen Bell being covered in tattoos were one that originated from a simple joke. When the first images of her with her ink emerged, they spread like wildfire on Twitter, Facebook, and Instagram. Because of the lack of context, it is not surprising at all that many people fell for it.

It did not help the cause of demystifying her tattoos that a lot of social media trolls actually rolled with the joke. There were confirmations that the tattoos were real. Kristen’s fans were no longer able to tell fact from fiction. So rumors of her actually getting those tattoos snowballed into prominence.

Where They Actually Came From

Of course, as one would expect after giving the whole situation a little bit more contemplation — Kristen Bell’s tattoos were not real at all. As a matter of fact, most people who were clever enough to do a reverse image search on the pictures found out that they were actually from an old skit that featured Kristen Bell for Funny or Die back in 2012. In that particular skit, Kristen’s body was covered with butterfly tattoos as well as tattoos of several notable figures like Steve Urkel.

Despite the video being so old, it only goes to show how Kristen aged like a fine wine and fans were not able to distinguish her younger self from her current self despite their best efforts.

Now that they realized that Kristen’s tattoos were fake, many tattoo-loving fans who wanted the phenomenon to be real didn’t give up on their quest to discover whether or not the actress really had any secret tattoos. These speculations were later laid to rest when Kristen was doing an interview for Wired while promoting her new film The Boss starring her and Mellisa McCarthy.

When asked whether or not she actually does have ink on her body she denied that she had any tattoos at that moment because her husband does not want her to get any, saying “I’ve always wanted a tattoo, but my husband doesn’t like, uh, girls with tattoos.”

Even though the actress doesn’t really have any tattoos at the moment, she claimed that her donning tattoos on her body are not out of the real possibility in the future. According to Kristen, she naturally has very strong maternal instincts. She would be more than willing to get a maternity-related tattoo in the future.

“I mean, at one point I’m going to get a little back tattoo that says ‘there’s no such thing as other people’s children because there’s just not, I mean, I believe it to my core because everyone you pass on the street was celebrated when they were born.”, the actress said in an interview on the topic — proving that if she is ever going to get tattoos on her body, it will not only be for the sake of art but for the sake of sending a very profound message about motherhood.

If anything is to be taken away from this hilarious rumor of the Frozen actress having tattoos on her body, it’s that we naturally should not trust anything that we see on social media sites so easily. Even though these jokes were quite harmless and actually very funny, it still proves that it is very difficult to tell what is authentic on the internet and what is not. With a little bit of research and using all of the tools that are available at one’s disposal, however, jokes and real information would be much more simple to tell apart. Even though Kristen Bell’s tattoos were not exactly real — the love and admiration of all of her adoring fans is something that is surely tattooed prominently in her heart.

11 Amazing Foot Tattoos You Can Use as Inspiration

Why Did Charles Melton and Camila Mendes Break Up?