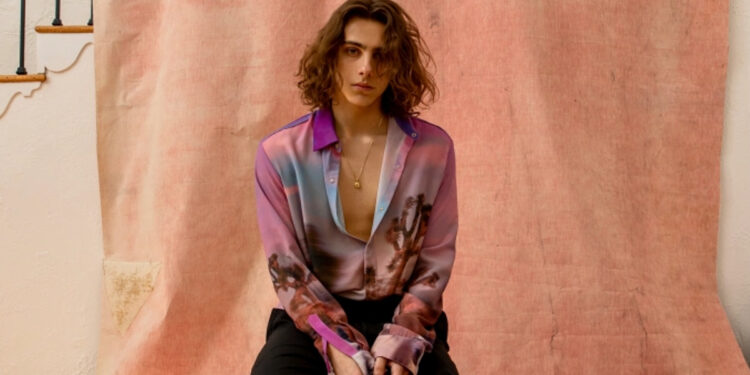 Eddie Benjamin is a newer musician who has been gaining lots of popularity in the past few years. Some might have found him through his ongoing relationship with Dance Moms star, Maddie Ziegler. Others might have first heard his music when he opened for Justin Bieber. While the popularity of his music is on the rise (especially on TikTok), many still do not know a lot about the man behind the music. So who is he? How did is successful music career begin? Here is everything you need to know about the upcoming pop idol, and boyfriend of Maddie Ziegler, Eddie Benjamin.

Eddie Benjamin Was Not Always A Solo Artist

Eddie Benjamin was born on January 16th of the year 2002. He was born and raised in Sydney, Australia. Eddie is now in his 20s and living in America. However, before he moved to Los Angeles, California, he was in a small rock group called the Haze Trio. This band consisted of Eddie Benjamin, Tash Wolf, and Indy Linzbichler. The group of three met each other while they were teenagers attending Rose Bay Secondary College in Dover Heights, Australia.

This young trio was an instant hit all over Australia. They began touring the country entering several competitions. They won a lot of competitions as a group. Most notably, in 2016, they competed for YouthRock and won a statewide talent search with their music.

Eddie Benjamin is a very talented young man. His singing voice is beautiful and his music videos are mesmerizing. He does not just sing though! He also loves to play guitar, bass, and piano. His father was a drummer so he has said in interviews that he grew up surrounded by instruments.

He got his first guitar when he was 11 years old and has played ever since. Despite starting with guitar, he very quickly wanted to learn to play the bass. Eddie Benjamin credits seeing Prince play bass live with this interest in switching. He has said that he likes to play bass the most because it combines rhythm and melodies in a very satisfying way for him. His dad being a drummer influences his need for a good rhythm a lot.

Eddie Benjamin Writes And Produces Songs For Others

Eddie Benjamin has several hit songs of his own including “Weatherman”, “F#ck My Friends”, and several others. But what many people do not know, is that he also has helped to write and produce songs for other artists. He has worked on songs with lots of other fan favorites.

In 2021, he co-wrote and produced “It’ll Be Okay” with the famous pop star, Shawn Mendes. Along with five other co-writers, he helped to compose the song “Holidays” for the band Earth, Wind, & Fire. He co-wrote (and even performed) in two of Meghan Trainor’s songs. He is credited on both “Funk” and “Here To Stay” on her album, Treat Myself. He is also credited on Cordae’s album, From A Bird’s Eye View under producers, composers, and vocals. Needless to say, he is a very talented songwriter in addition to being a talented musician.

Like many newer gen Z artists, he also loves Amy Winehouse and has covered “Back In Black” (wonderfully we might add). Though she is not his only musical inspiration. Eddie Benjamin is also inspired by his dad being a drummer. He has said his main inspiration musically is Stevie Wonder. Though he also loves Miles Davis and Frank Ocean. Eddie Benjamin has a very widespread interest in music as he also listens to lots of classical works by Mozart and Bach.

He Is Actually Friends With Justin Bieber

Justin Bieber and Eddie Benjamin met a few years ago through a mutual friend and they ended up really hitting it off. Justin has become a bit of a mentor for Eddie, both musically and personally. Professionally, Justin has talked Eddie through the ins and outs of being so famous so young. He has also made Eddie one of the openers for his tour.

On a personal level, Justin and his wife, Hailey Bieber have shown Eddie Benjamin and his girlfriend, Maddie Ziegler an example of a realistic celebrity couple. Justin Bieber has acted as an older brother in a lot of ways to Eddie.

Eddie and Maddie have a seemingly very strong relationship. They were friends for about a year before they started dating in 2019. The young couple ended up quarantined together in 2020. Maddie Ziegler was featured dancing in Eddie’s music video for his song “Speechless”. In interviews, the two speak very positively about their relationship. They have said that they inspire and push one another to do their best. The couple is very supportive of one another.

There is a lot to know about Eddie Benjamin beyond his music. He has loved music ever since he was little with his dad being a drummer and his mom being a dancer. It has always been a part of his life. He can write, sing, and play lots of instruments. Eddie Benjamin is definitely on the rise as a popular artist and it is very exciting to see what he’ll do next.

The New York Punk Musicians That Shape Fashion Today
Gina Brooklyn Is a Musician to Follow
Valentina Paloma Pinault: 4 Facts About This Famous Teenager
Thomas Brodie-Sangster Spotted With Elon Musk’s-Ex Talulah Riley on the Red Carpet
Everything You Need to Know About Billy Magnussen