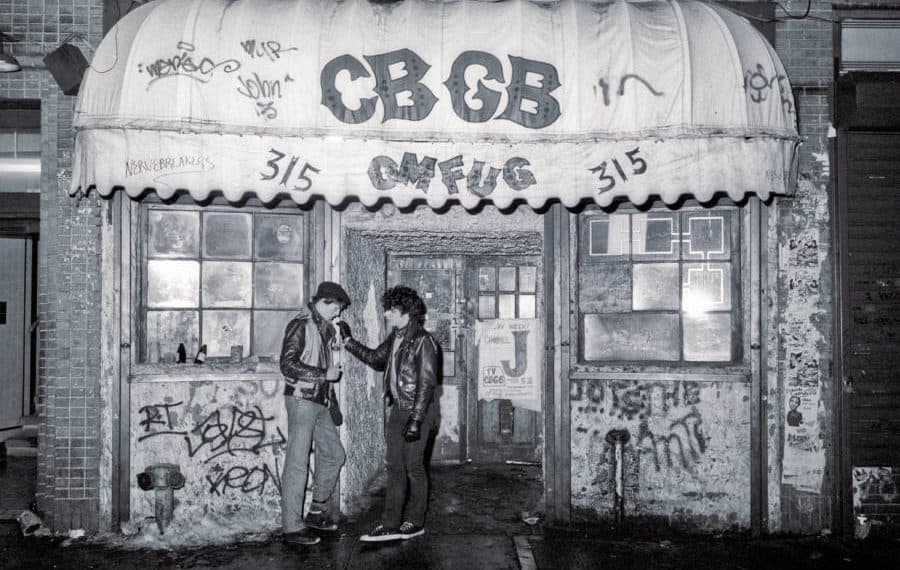 Some are New Jersey transplants, others ran away from boarding school, some were just born in raised in New York. But all of these musicians came together in the late 1970s and early ’80s to create thrashing ballads and art that not only changed the way we listened and created music, but also the way we dressed—in a more non-conforming appeal with gusto and a little more sub-cultural disapproval from our elderlies.

Although that New York is long gone, the style that was established during the punk renaissance can be seen on runways and Instagram feeds galore and in the art world through exhibits such as PUNK: CHAOS to Couture that was held at the Met in 2013, where they recreated the graffiti-filled CBGB’s bathroom among fashion pieces that emulated the style meandering the famous Bowery venue. We’ll always sort of have CBGB’s through the John Varvatos store that stands there today, if you squint hard enough.

Patti Smith was deemed the “Godmother of punk” after a mind-altering performance at St. Mark’s Church in the Bowery in 1971, where she fused her poetry with Lenny Kaye on guitar.

Her choppy hair and gender-bending demeanor could have her mistaken for Keith Richards or Johnny Thunders, but she is a beacon of female empowerment who continues to make music, books, and movements today–including her NYT’s bestseller Just Kids and her work with environmental organization Pathway to Paris.

Her signature look of and white button-down, as photographed by Robert Mapplethorpe for her debut record Horses, or a band shirt and some jeans, is what every fashion maven works with as their on-the-go or event style these days.

Kentucky born, Delaware boarding school runaway Richard Hell moved to New York with his classmate and former Television bandmate Tom Verlaine. When he was booted from the group in 1975, Hell went on to create his own band, The Voidoids and released one of the definitive punk albums of 1977, Blank Generation.

His style of ripped and written on t-shirts, disheveled spiked hair and safety pins were never bland and carried an international influence; Malcolm McLaren, a SEX shop owner alongside partner Vivienne Westwood and music manager, decided to take that style to the U.K. as he formed the Sex Pistols and dressed them identically.

Its explosive influence on the punk scene can still be found from Helmut Lang to your local Hot Topic. He’s even influenced a main character part of the short-lived 2016 HBO series Vinyl. And the beat goes on.

See Also: Asos Says No to Silk, Mohair, and Cashmere

Blondie is a rock band that consisted of members Chris Stein, Gary Valentine, Jimmy Destri, Clem Burke and vocalist Debbie Harry at the time of their 1976 self-titled release Blondie.

But most just know Harry and her platinum bleach blonde hair that overshadows the rest of the namesake, although the band changed it after Harry was catcalled using the term. Her sleek and sensual style of high-waisted pants paired with heels, over-sized shirts and mesh contrasted with the bands building blocks towards what soon became wave and modern pop music.

Harry has even recently collaborated with clothing company OBEY for a line of punk-inspired clothing and can be seen at NYFW most seasons. May the bleach bottles and vintage Levi’s stay eternal.

Britain had Bowie. New York had Bowie, too, but there was also frontman David Johansen and his band the New York Dolls on small-scale stages in the village art scene of the ’70s.

Also managed by swindler Malcolm McLaren, which turned them into an all-leather clad boy band that lead to their break-up, Johanson donned his luscious shag reminiscent of a hair metal icon–when him and the Dolls weren’t wearing wigs–and the strut and style of a disco dancer with the added touch of garters and high platformed leather boots.

It was KISS without the commercialism. It was the raunchy that is brought to the bottled table of every New York club uptown and downtown. It was a proto-punk drag show that helped to normalize what other LGTBQ were doing at the time, which in modern day New York can be seen in any club within the 5 boroughs. Progressive influence through platforms is the way to go.

Sonic Youth are of ’90s allure, but their foundations begin in 1981, as former art students basking in the avant-garde world of Manhattan. Former bassist Kim Gordon’s style of ’60s influenced dresses and graphic shirts with bold statements, with the dissonant sounds of post-punk, are the beginnings of grunge from the opposite side of its Seattle origins.

You can now catch her alongside her daughter, Coco Gordon Moore, on runways, ad-campaigns and collaborations with clothing lines such as & Other Stories.

Lest we forget the leather jacket cool. The Fonz made it television friendly, but Joey Ramone and the rest of the band made it fashionable yet taboo for its correlation to punk.

The 6’6″ Forest Hills native arched over his microphone with the simplicity of a pair of blue jeans, white crew neck, round sunglasses, and the biker jacket that dons the Rock and Roll Hall of Fame today, and is continuously emulated by It Girls, modern rock stars and fashion designers ever since the release of 1976’s eponymous Ramones album.

12 People Confess Their Most Embarrassing Hookups