Who is she and why is she so inspiring? 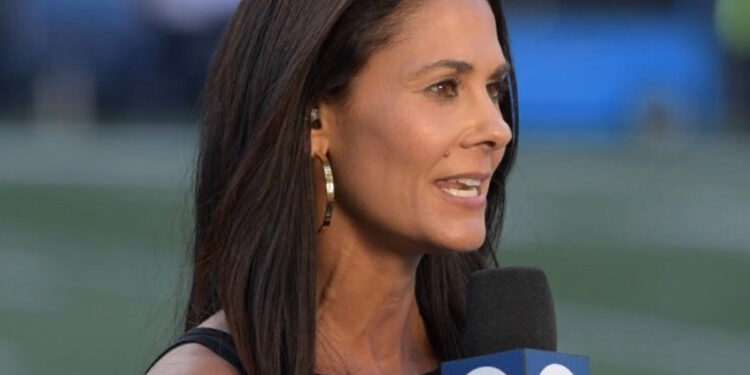 When talking about sports, the conversation can end up being very male-dominated. This only gets worse when talking about sportscasters. When it comes to sports broadcasting, there are far fewer women in the field than men. In fact, women make up less than 20% of the industry. This is typically written off as a part of the false stereotype that women enjoy sports less than men. There is also sadly a popular sexist belief that women only enjoy sports to attract men. That is hopefully going to change as more and more women go into this profession. One woman who is an inspirational part of that change is Tracy Wolfson.

Tracy Wolfson was born in March of 1975. She grew up in New York. Tracy went to Clarkstown High School North which is in a suburb of New York City called Rockland County. She loved sports as a kid and was interested in sports reporting from a very young age.

After graduating from high school, Tracy Wolfson attended the University of Michigan. She graduated with a bachelor’s degree in communications. Now, she lives in Tenafly, New Jersey with her husband who she met at college. Together they have three children, all boys. Tracy is a loving family woman who often posts about her husband and kids on her social media.

After Tracy Wolfson graduated from college she became a sports researcher at CBS Sports. She would research far less popular sports such as snow skating (a combination sport of snowboarding and skateboarding). One day she made a video of her reporting which got her a position as a reporter in New Jersey for WBZN. She then worked as a reporter at a few other companies before being hired by CBS as a sports reporter. Tracy Wolfson would be the lead reporter for live basketball and football game broadcasts.

She has now been with CBS for 16 successful years. Tracy has been justifiably nominated for an Emmy four different times for her incredible sports reporting. She has covered huge sporting events including (but not limited to): March Madness, The Final Four, The Super Bowl, and The Sun Bowl.

Why She Is So Inspiring

Tracy earned her successful career every step of the way. She pursued her jobs with immense passion. In 2014 she opened up about being a sports reporter on top of being a mother in her blog post, “Stories of a Sideline Mom”. Tracy said this was the hardest part of being a woman in this industry.

She mentioned that juggling these two roles in her life proved to be fairly difficult at times. Tracy mentioned in this post that she wanted to be there for younger women in the sportscasting field to help them navigate this dilemma. She wanted to do this because she felt she did not have a lot of options for people to lean on about this specific issue. It is so kind of her to be that voice and that shoulder to lean on for people.

In 2019, She had a post super bowl interview with Tom Brady that had a lot of people talking about her. The game had just ended and people swarmed Tom Brady for interviews about this big win.

The crowd was hectic and intense, but Tracy Wolfson, a smaller woman got to him first. Some people were demeaning about this saying that she was put in too dangerous of a situation (something they surely would not comment about a male sportscaster). However, most were simply in awe of her for this. It is very impressive to get to interview someone first after such a big win in an intense football game.

Her response to the public’s reaction to this interview was wonderful. She simply said that she was doing her job. Sometimes these moments can get intense, but she just expressed how much fun it was for her. She said that she loved her job including this part.

Why Her Story Is Important

Tracy’s story is not only inspiring but also important. Tracy Wolfson has paved the way for many young girls interested in a sportscasting career. She proudly continues to do so even to this day. Tracy has been open about the fact that it is not always easy to be a sports broadcaster not only as a woman but in general as well.

However, she also talks so passionately about how much she loves her job and how fun it is to do. It is so important for young girls to have a woman like Tracy Wolfson as an open and honest role model. Even if they aren’t interested in going into sportscasting, her story is still relevant. There are several male-dominated fields that women might feel nervous to join. Seeing someone like Tracy Wolfson handle this challenge with grace and strength is important for everyone.

An Inspiring Story of Kelly Orgeron, Ex-Wife of Ed Orgeron

The Best Makeup Mirror Ideas For Your Vanity