From how they met to their careers, find out more about the relationship between Dove Cameron and Thomas Doherty and if they're still together. 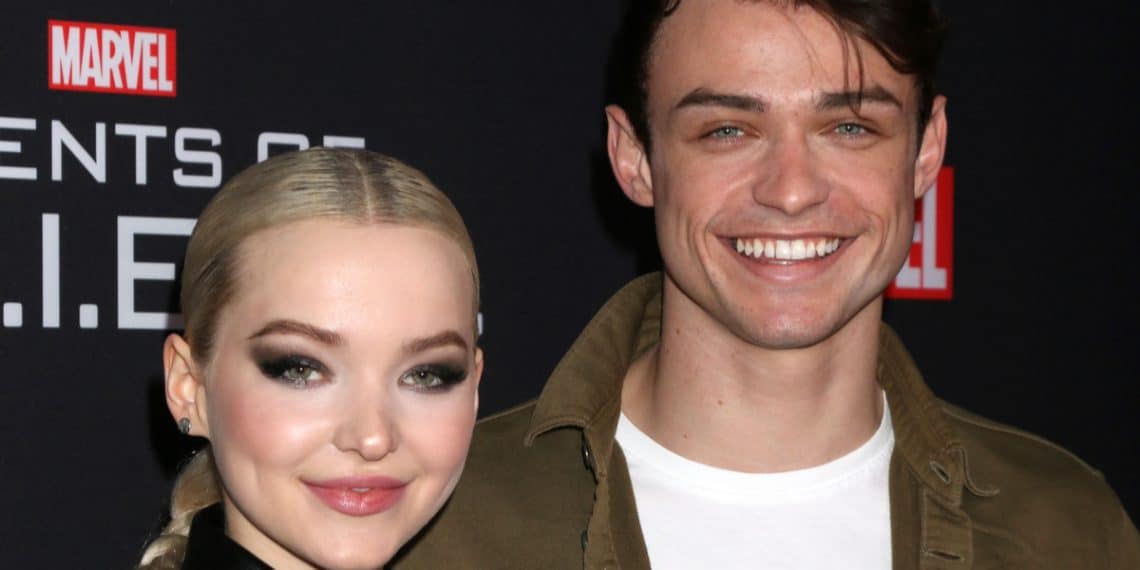 Dove Cameron and Thomas Doherty have split after nearly four years of dating. They broke up in October of 2020 and notified their fans via Instagram posts and stories to quell the rumors that had begun circulating. Despite breaking up, Cameron claims that they still care for one another and will remain friendly. Although Cameron has been vocal about the breakup to her fans, Doherty has remained silent on social media about the entire affair.

Who Is Thomas Doherty?

Thomas Doherty is an actor and singer from Disney Channel who appeared in the series The Lodge and the film franchise Descendants, both Disney musicals. He was born on April 21, 1995, in Edinburgh, Scotland. With an older brother and a younger sister, Doherty is the middle child of his family.

He attended the Royal High School in Edinburgh and then The MGA Academy of Performing Arts in Edinburgh. After studying musical theater at the Academy, he signed on to an agency in London. In July 2015 he joined Olivia Bell Management, a talent management agency based in London.

He received the role of Sean Matthews on the musical series The Lodge, where he played a Scottish hotel worker and mountain biking enthusiast. He went through rigorous biking training to prepare for the role, as well as voice acting to tone down his heavy Scottish accent. In 2016 he earned the role of Harry Hook in Descendants 2. He appeared in the third installment of the franchise as well, reprising his role as the son of Captain James Hook, the villain from Peter Pan.

He appeared in the television series Legacies on CW in 2019, and also landed a role in the new reboot of Gossip Girl, which is currently being filmed.

Who Is Dove Cameron?

Dove Olivia Cameron is an American actress and singer famous for her roles on Disney Channel. Born Chloe Celeste Hosterman on January 15, 1996, in Seattle, Washington, Cameron has one older sister, Claire, and her parents divorced when she was young. She grew up in Washington until she was fourteen. During that time she became active in community theater at the Performing Arts Center in her city on Bainbridge Island. At fourteen years old her family moved out to Los Angeles, California. She attended Burbank High School, where she sang in their National Championship Show Choir. She later changed her name in 2011 after her father’s death. Dove was the nickname that he always called her by, so she changed it in his honor.

She first began her acting and singing career in her Performing Arts Center back in Bainbridge. She landed roles in the stage production of Les Miserables and The Secret Garden when she was about 11 and 12 years old. Then, in 2012, she was cast in a Disney Channel series that eventually changed to become Liv and Maddie, a show about identical twins with very different personalities. She won a Daytime Emmy Award for Outstanding Performer in a Children’s Series for this show.

In 2015 she starred in the Disney film, Descendants, and reprised the role for the next two sequels. She released cover songs and singles under Walt Disney Records as part of the franchise, which all ranked highly on the Billboard charts. Most notably, her first number 1 hit song, “Better in Stereo”, and her cover of Christina Aguilera’s “Genie in a Bottle” garnered many views and audio plays.

Cameron turned her attention to stage acting and musical theater, earning the role of Amber Von Tussle in NBC’s live presentation of Hairspray in 2016. She played Sophie in the live production of Mamma Mia at the Hollywood Bowl, and she appeared in the Netflix film Dumplin’, the Marvel television show Agents of S.H.I.E.L.D., as well as the installments of Marvel Rising on Disney XD. In 2018, she played the role of Cher in a stage adaptation of Clueless.

Columbia’s Disruptor Records signed her in 2018, and she released her debut EP Bloodshot/Waste in September 2019. She has since continued to release singles and cover songs on her personal YouTube page.

Dove Cameron and Thomas Doherty met on the set of the Descendants 2 film, where she was actually engaged to someone else. The engagement fell apart early in 2016. By the end of the year, the two were dating and quickly fell in love.

They kept their dating life private at first, as they didn’t want to reveal their brand-new romance to the entire world. Soon, they became quite a public couple and constantly praised each other on their personal social media accounts. They dated long distance for many years as Cameron was in Los Angeles and Doherty in the U.K. The couple traveled to see each other often, even if it was only for a few days at a time.

After the two unfollowed each other on social media and began deleting pictures of each other together, fans suspected a breakup. They broke up in October 2020 but were silent on the matter until December of that year, when Cameron took to her Instagram and Twitter to confirm the rumors. Their fans were quite heartbroken after the breakup, as they believed the couple were “endgame” and were perfect for each other.

The two have requested privacy from their fans as they navigate through their breakup. It, fortunately, seems that there is no animosity between the two. It has been a stressful year with the pandemic, so we hope both of them are doing well and staying healthy. Breakups can be tough, so hopefully, everything works out for them both!