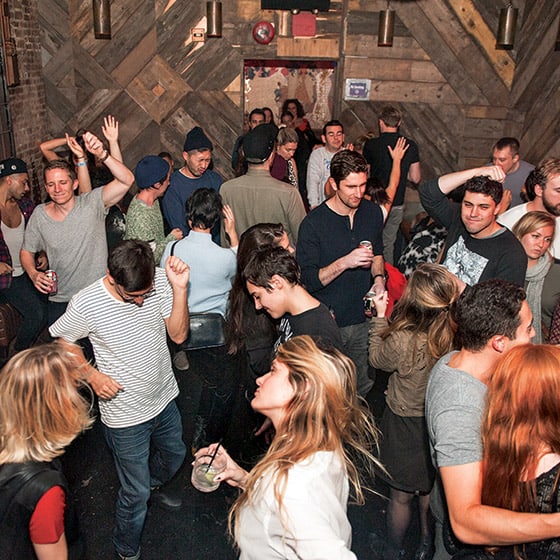 There are 8.538 million people in NYC, so why is it so hard to meet a decent human? My choice for venturing into a new dating scenario in the name of Stoplight Party. But before I go into details, let me talk about my dating experience before that.

I’m not a huge fan of online dating; I prefer to find a spark in person. After a rollercoaster experience with a stalker ex and a year and a half of emotional recovery, however, I decided to give it a shot anyway. I downloaded a few apps, made a witty profile, and chatted up a few strangers.

My Tinderella talked more than anyone I’ve ever met in my entire life, and my OkCupid bloke showed up for a Highline walking date on rollerskates. Rollerskates. He had bladed from EAST HARLEM to CHELSEA. That’s 120+ blocks if you’re counting. And guess what happened halfway down the Highline? His calf started cramping, so we had to sit down.

I had confirmed my online dating suspicions and quickly deleted any trace of a profile. The bar scene screams “hook up culture” to me, and speed dating was a little too on the nose. I took to Google to see if I could find some meetup group for singles, and I found the NY Social Network.

In theory, it sounded awesome! They claim that they specialize “in taking advantage of all that NYC has to offer and turns those opportunities into fun social activities for all to enjoy.” With a glance at the website’s calendar, it’s obvious that they host multiple events per day with ample variety to choose from. This week alone, they’re offering sunset cocktails downtown, a few after-work parties, scavenger hunts, a group dinner in Little Italy, a Bear Mountain hike, group archery lessons, a homeless shelter volunteer night, and an interactive murder mystery party.

My choice for venturing into a new dating scenario? “Stop, Go or Go Slow Traffic Light Party: A Fun New Party Concept.” Green means single, yellow means it’s complicated, and red means in a relationship. A low-key party seemed like a good way to get a feel for NYSE without committing to a day-long event. I paid the $15 registration fee and talked my coworker into joining me for the evening.

I don’t spend more time than I absolutely must in Midtown East, so I had no qualms about visiting The World Bar until I arrived to find that it was located in Drumpf Tower. The idea of contributing even minor funds to that orange towelette-tanned oaf was repulsive to me, but I dragged my coworker along with me, and we had each pre-paid for the party.

Upon entrance to the bar, there was a little fold-up table with a friendly NYSE staff member. She greeted us warmly and asked which glow bracelet color we would be donning. We were each given nametags and a playing card. She said to hold on to the card, as we would need it for an icebreaker.

Of course, I made a beeline for the bar and ordered my signature tequila soda with lime. We then began to mingle, or rather, take a turn about the room à la Pride and Prejudice. There were a lot more men than I had expected. Frankly, I thought it was going to be a peach fest. The age level seemed to skew mid 30s-40s, which was a bit of a bummer for 20-something me.

Several dudes approached my coworker and me throughout the night. A lot of guys seemed to be making the rounds from girl group to girl group, chatting then continuing along. A guy asked if it was my first time there and told me that he attends NYS events all the time.

That kind of dulled my hope of meeting someone. One man with a yellow bracelet tried to open up communication, so I asked him what the deal was with the yellow. He said he was “with someone,” but that he was “open to other things.” Nothing irks me more than being referred to as a thing. “Does she know you’re here?” He couldn’t say. Hard pass.

Finally, it was time for the icebreaker. The hostess instructed everyone to look at their playing card. Mine was the 9 of clubs. I would have preferred the 10. She told us to find groups of 4 matching cards as quickly as possible. I skirted the circular bar, looking for other 9s. I assumed we would be hanging out with our number groups for a few minutes to get to know each other, so I hoped the other 9s were interesting.

As soon as I had found one match, the hostess said the game was over, and that the 4s had won the game. Each of them received a voucher for a free social event. A solid four seemed to be an apt rating for the event. That was it, the end of icebreaking for the night.

We stuck around for about an hour. Many of the attendees seemed genuine but pretty reclusive. These events are definitely great practice for New Yorkers with social anxiety. The occasional creep was trolling for a one night stand, but the room was enjoyable overall.

My coworker was ready to head home around 9, so I picked up my coat. One guy, who had spoken to me briefly before continuing rounds, asked if I wanted to grab drinks somewhere else. I declined. I kept my phone number to myself, as well.

Overall, I’m sure some NY Social Events are very enjoyable. There are plenty of other happenings on the list that pique my interest. Unfortunately, I’m not looking for shy old dudes at the moment. I think I’ll stick to my dream of meeting someone at the cheese counter of the Williamsburg Whole Foods. This dream is probably too gouda to be true.