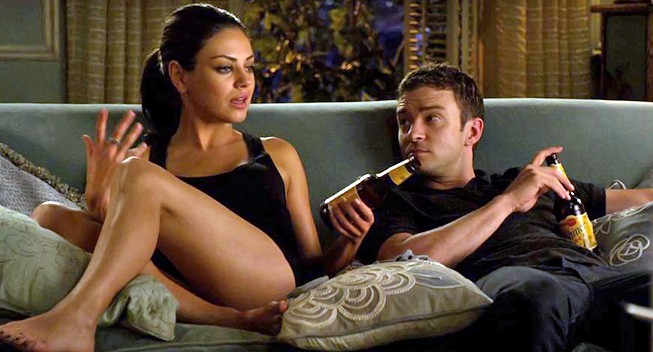 “Friends with Benefits,” can be quite convenient. Most likely, you’re good friends who aren’t seeing anyone special but still crave an intimate connection. You both find each other attractive, but don’t necessarily want to date—either because of fear of ruining the friendship, disinterest, or because it simply doesn’t fit into your busy schedule. We’re city dwellers; we barely have time to catch the train!

Friends with Benefits, in actuality, is an elusive relationship that many people chase and even more fail to catch. It rarely works, mainly because of a lack of communication. If not enough clear emotional or physical boundaries are established upfront, like “No sleepovers,” or “If one of us wants to sleep with someone else, we should stop,” things can get complicated. One of you may develop deeper feelings for the other beyond the purely physical and platonic, or meet someone else, or just isn’t into it anymore.

Your friendship can become even more precarious if you decide to end the physical aspect of your relationship and return to being just friends. It’s possible but doesn’t happen very often. Usually, the platonic relationship dissolves into an uncomfortable acquaintance or—and here’s the million to one scenario—it’s a seamless transition back to platonic bliss.

Unfortunately, I’m the indirect victim of the latter.

A Lack of Communication

Communication is the key to any healthy relationship – romantic, platonic, or professional – it all falls under the same rule. When something comes up, pleasant or posh, we talk.

But trust is a tricky thing.

My boyfriend James (pseudonym) has a close friend, Katie (also pseudonym). They hang out all the time—grab lunch, go to concerts, etc. I don’t mind at all. I have plenty of male friends who are just that. Why would I be suspicious of him having a similar friendship?

Except I should have been suspicious, because I suddenly discovered they even though they’re just friends now, they didn’t always use to be.

James: Hey babe, I think I should tell you, Katie and I once slept together. It happened years ago, we both stopped it before it went any further. It just didn’t feel right. We’re better off as friends – and have been ever since. I just wanted to be honest with you because I care about you and want to have an open-honest relationship moving forward.

Me: Wow, thank you for telling me. Do you still have feelings for her?

James: She’s in my life, but not in the same way you are. I want to be with you, I just wanted you to have all the facts.

Me: I appreciate your consideration of my feelings and would love to ask you some more questions if I can.

Him: Absolutely, ask away.

That’s how the conversation should have happened. Instead, it went something like this—

I was just wrapping up my server shift at a restaurant in the West Village and was changing out of my uniform when James texted me. I decided to give him a call. It had been a particularly grueling shift and I just wanted to hear his voice.

James: Hey you, I just got done having dinner with Katie. Are you off work yet?

Me: Yep, just getting changed now.

Me: Of course. (pause, slight giggle). Hey, can I ask you something?

Me: [pause] Have you and Katie ever you know—slept together?

I was teasing him, I knew the answer was no. I was just fishing for them, “I only have eyes for you,” line.

Him: (even longer pause) Yes.

My heart dropped into my stomach. I suddenly had to concentrate on breathing, but beneath that, my anger was starting to bubble up.

Me: Yep, still here. Just processing what you just said to me ten seconds ago instead of I don’t know, two years ago!

James: It happened years ago, in my early twenties, before I even met you. Katie and I don’t even see each other like that anymore.

Me: But you did once.

Me: Oh I see, the first time was a fluke, so you gave it another shot, but didn’t want to try for round three?!

James: Jeez, c’mon Sophia. We knew we made a mistake. Katie and I are just friends now. That’s it, nothing more. I love you, I want to be with you!

Me: So why didn’t you tell me? You’ve been out with her so many times in the two years since we’ve been dating – to concerts, to dinner, coffee, yoga classes. Jesus, you see her all the time!

Me: And in all that time, you never thought to mention that years and years ago, you guys made the mistake of sleeping together?

James: I didn’t think it mattered.

A lie of omission is still a lie. You can’t make up for it by apologizing, explaining why it never came up.

Him: Will I see you later?

Me: (emphatically) Not a chance. [hangs up the phone]

In James’ defense, I made a mistake too. I told him that I wanted to meet her. Curiosity has a way of biting you in the ass.

I exercised nonstop in the weeks leading up to what would be an infamous mid-afternoon lunch. I dolled myself up in the finest casual elegant outfit: a navy blue A line shirt dress with strappy low-heeled sandals, flaunting my natural curls and my slender waist. I needed to look flawless both with confidence and to hide my insecurity.

We met at a small French Bistro in the East Village. I beamed excitement towards meeting Katie, a woman in her late 40s and a yoga instructor. It was a beautiful midsummer’s day. The sun was shining, but not beating down. It should have been a perfectly lovely afternoon. But as soon as my butt hit the seat cushion, the jig was up.

I was out for blood. I sat stoically poised, looking straight ahead, expressionless. I gave them no room to tread lightly—I was an orca whale swimming near the island of seals, no topic of conversation was safe.

My answers were short, less than a full paragraph of text compared to her monologues of questions trying to fill the silence and engage in friendly chit-chat. I did nothing to encourage her good faith. I refused to give her any leeway in thinking that just because I showed up to lunch, it meant that I wanted anything to do with this woman who twice shared a bed with my boyfriend.

Long story short, it was an agonizingly long lunch for James—who played third fiddle to our palpable rivalry and tried to bridge the gap.

The tension mounted but reached its peak when the bill finally came.

When we first met, I hugged her a warm welcome. I was the sweet and charming girlfriend who was progressive enough to meet my boyfriend’s current friend and an old flame. But I surprised myself and shook her hand to say goodbye. Turns out I’m not above being petty.

I Went to a Ny Social Network Stop Light Party... Here's What Happened