These NYC speakeasies are incredibly cool. 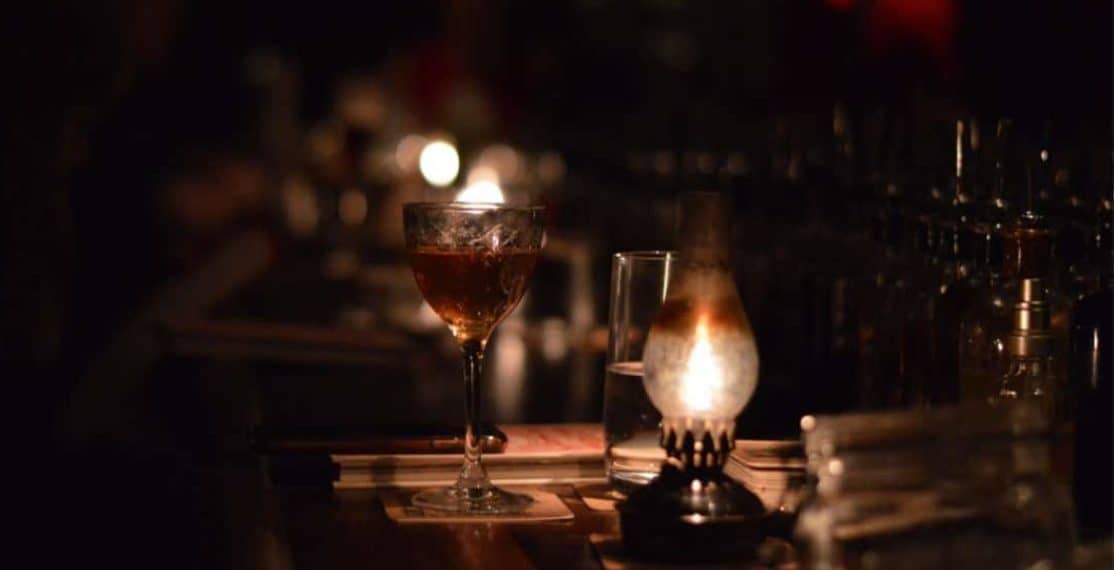 Cocktail aficionados in New York City know that the speakeasies in NYC are some of the coolest spots in the world. These 19 speakeasies for those in the know are must-see venues for those who love a cool cocktail.

This speakeasy is named for the portion that evaporates during spirits’ aging process. It’s on top of a Japanese restaurant, and has a cool Prohibition-era feel that’s matched by its drinks menu. Yelp reviewers are consistently impressed by the knowledgable bartenders here.

Like Angel’s Share, this Chelsea speakeasy is behind another business (in this case, Stone Street Coffee Company). It has a Jazz Age feel and extensive cocktail menu. The name is a nod to the fact that gin — much of which was homemade — was the predominant drink during the Prohibition Era.

This East Village speakeasy serves awesome drinks in a dark, romantic atmosphere that’s perfect for a first date. If you’re at at-home bartender, you can pick up a copy of founder and owner David Kaplan’s book, Death & Co: Modern Classic Cocktails, to up your at-home drinking game. Even among NYC speakeasies overall, this is one of the best-known spots.

This LES haunt only accepts parties of six or less. If you’re coming here, brace yourself to spend some serious dough: cocktails average around $20. It’s well worth it, though — this bar’s two owners, Sam Ross (creator of the Penicillin, one of the greatest new classics in mixology) and Michael McIlroy, know what they’re doing.

There’s no menu here: just tell your bartender what you’re feeling like, sit back, and be ready to be delighted. This is one of the best NYC speakeasies for getting a great, creative drink.

Pass through the Café Select kitchen to enter this self-described “oyster shack cocktail bar speakeasy” in Soho. While you’re waiting for your drink, enjoy the cool nautical theme, which includes buoys and netting as decor.

Even among speakeasies in NYC, this is one of the best-known spots. This West Village spot is famous, and rightfully so, as its cocktails are impeccably crafted. Come here to impress a first date.

This hidden bar is named for the 18th Amendment, which banned alcohol. Luckily, though, its name isn’t indicative of its offerings. There are some amazing drinks here, and if you don’t like the offerings on the menu, you can also get a custom cocktail based on your flavor and spirit preferences.

If you are ordering off the menu, though, consider trying the CBD-infused High Tea with limoncello, ginger and lemongrass.

If you want to multitask while you’re drinking, Blind Barber is a great option. Here, you can get a haircut to go with your cocktail. This speakeasy has locations beyond New York, too — there are outposts in Chicago and LA. To drink, try the Batman, which has gin, St. Germain, cava and mint.

This speakeasy is located behind a keyhole-shaped cobalt blue door in Local92, a Mediterranean restaurant. The cocktails here are Moroccan- and Mediterranean-inspired, and include a number of tea-based drinks. If that intrigues you, try the Oolong Island Iced Tea or Dragon Punch.

This West Village speakeasy is above a Five Guys. To get inside, go through Five Guys, enter through an unmarked door, and go up a black staircase.

Once you’re inside, enjoy the cozy living room-like vibes along with a healthy side of people-watching (the West Village is one of the best neighborhoods in the city for watching New York’s beautiful residents mingle with each other).

See Also: Dine At The Most Iconic Cafes Of New York

During the day, Patent Pending is a friendly neighborhood coffee shop, Patent Coffee. After hours, you can go through the café, then through a back door (the code is 4927) to access a cocktail bar on the other side. As befits its location in the Radio Wave Building’s basement, Patent Pending sorts its drinks into categories with sonic names, such as “Vibration” and “Energy.”

This Upper West Side spot is inspired by old-school British gentlemen’s clubs and cricket. It’s on top of Burke & Willis, an Australian restaurant. Club members can store the spirit or wine of their choice in the club’s private liquor lockers (the club helps get the stock from everywhere in the world).

If you’re not a member, you can enjoy the interesting cocktails, such as the Salt & Pepper cocktail (potato vodka with garden tomato essence, smoked black pepper and white truffle mist).

This speakeasy above Home Sweet Home is accessible through an art gallery’s back door. Among NYC speakeasies, this is one of the harder ones to find. It’s worth it, though: a chic LES crowd hangs out here, and the jazz music is a bit classier than the rowdier dance scene below at Home Sweet Home. While you’re here, try the creative cocktails and frequent live music.

This Chinatown haunt allows drinkers to choose from “prescriptions” (all of which involve alcohol). The bartenders are dressed to theme: they all wear white lab coats. While this can all get a little gimmicky, the drinks are good.

This basement speakeasy under Chinese Tuxedo serves many superfood-heavy drinks. If it has dragonfruit in it, it can’t be too bad for you, right…?

Unlike most of the other NYC speakeasies on this list, Hidden Pearl is light-filled and bright. This spot behind Wanpaku Ramen serves Japanese cocktails, sake and small bites.

Marvelous Mrs. Maisel fans will be delighted by the old-school retro feel of this speakeasy. It has deep booths, antique lights, and a small stage for jazz combos. Among NYC speakeasies, this is one of the best for those who long for bygone days.

This romantic NYC speakeasy is a throwback to a slower, more decadent time. Sink into a plush seat here and enjoy the luxe feel of this Gramercy spot that Eater recently named one of New York City’s top cocktail bars. It’s also one of the best-known speakeasies in NYC.

This NYC speakeasy is inspired by Sir Earnest Shackleton’s Antarctic explorations. It’s much easier to get to than Antarctica, though: simply go to the LES, wait on some couches, and go to this place on the second floor of Freemans.

33 Music Tracks to Help You Get Through a Tough Workout