Ever wonder why Converse are so much better than PF Flyers? Check out our reasons why there really is no competition between the two. 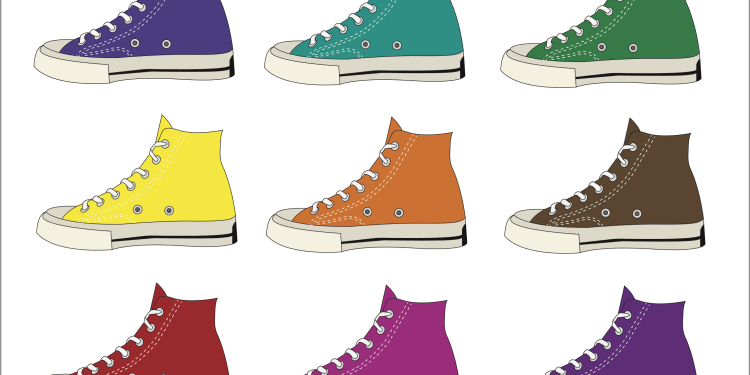 Having a hard time deciding between the two? Totally understandable! Despite looking exceptionally similar, Converse and PF Flyers are completely different from one another. Converse is owned by Nike, while New Balance falls under the New Balance umbrella. Just like their well-known parent companies, the structure of the two shoes is fundamentally different.

Chuck Taylors, or high-top Converse, were first created in 1917. PF Flyers made their first appearance in the late 1930s. In their double-decade head start, Converse became the first athlete endorsed shoe after professional basketball play Chuck Taylor became a salesman at Converse. Once his name was branded along with the All-Star logo, the shoes instantaneously became a fan favorite, and have remained a staple of pop culture ever since!

High-top Converse are cheaper than PF Flyers Center Hi model, the most similar style to the iconic Converse High top.

While the difference between the two models is about $10, PF Flyers fans usually prefer to buy higher quality models that will run you a pretty penny, as they feel comfier and look way cooler. Chucks have been an iconic silhouette for over a century, and their prices have remained the same, so it will be a long time before they are considered obsolete!

Converse became an a serious contender in the world of basketball in the late-70s and 1980s after basketball player Larry Bird began wearing them as his shoe of choice. Larry Bird and fellow basketball legend Magic Johnson even teamed up for a commercial for the brand in 1984! With a pair of Converse, you’re always ready for a game of basketball. Get a shoe that can do it all!

Bird sported several different Converse models from the start of his career in the 1970s all the way until the mid-90’s, most notably the Converse Pro, which you can buy now!

The Soles Have a Good Grip

While this has obvious athletic perks, shoes with a solid grip are the ultimate assurance to zero slippage. Slide-proof shoes make them wearable for all ages, perfect to combat slippery gymnasium floors. Need some outfit inspo? Look no further, here are seven ways to style your sneakers.

Every skater knows that shoes with a flat bottom are essential to the grind. They emphasize the feel, versus having a clunky sole that can obscure how the foot itself lands on the surface. On the topic of a good grip, Converse assures that your foot will never slide in the transition from pushing your board to placing it securely back on the board. While PF Flyers may look similar, the soles of their shoes feature a more contoured feel.

They Have More Options

Shoes are some of our favorite accessories – for good reason. Not only does Converse constantly release new styles, but you can find tons of colors to choose from. Unfortunately, PF Flyers do not have many, if any, fun or unusual colors to choose from, mostly your basics like black and gray.

Between Converse’s beautiful seasonal colors that rotate throughout the year, and epic collaborations, like Golf le Fleur by Tyler, the Creator, there are endless options to browse.

Not finding something quite to your liking? No worries, you can even customize your own shoes!

Gains Without the Pain – Awesome Shoes for Lifting!

Converse are even great for those who weight-lift for newbies and seasoned trainers alike! The flat sole helps with balance, as lifting is all about having the proper stance. High-top Converse are most ideal for lifters, as they give the ankles additional support during the intense sets of reps. We recommend having a pair handy when you’re looking for a new way to get toned.

Boots You’ll Fall in Love with

What Does the Phrase “Looking into The Mirror” Mean?

Plus Size Models Are Definitely Trending

Five Fab Brands That Give Back

Why Craigslist Tampa Is One of The Most Interesting Places On the Web?