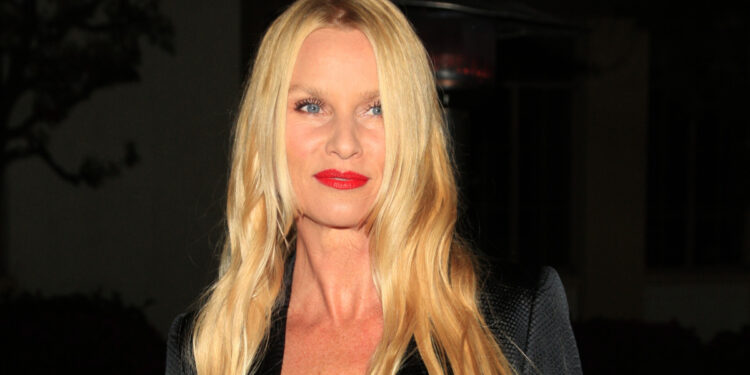 Nicollette Sheridan was born in Sussex, England in November of 1963. She moved to the United States when she was about ten years old. Nicollette Sheridan began working as a fashion model when she was just a teenager. She was later cast in a few different roles before landing a role in the popular primetime soap opera called Knots Landing in 1986. This role as the character Paige Matheson skyrocketed her career.

It is no secret that fashion trends from the early 2000s are back in style today. Few people have embodied this fashion better than Nicollette Sheridan in Desperate Housewives. Every outfit she wore whether casual or dressy, was absolutely stunning. Her everyday outfit usually consisted of a spaghetti strap tank top with jeans. Though she also wears some of the most beautiful (and low-cut) dresses in the series.  Needless to say, the wardrobe Nicollette Sheridan had for this role is ripe with inspiration for gorgeous outfits.

Her Character Was Blunt

Perhaps the best part about Edie Britt was her blunt personality. Nicollette Sheridan plays this sex-positive comeback queen with ease. Despite often being slut shamed by the other housewives in the neighborhood, Edie Britt always holds her head high. She is unapologetically herself. Watching this show with 2022 glasses on can make us realize that Edie was often treated unfairly and cruelly by the other women in the show. With this in mind, her bluntness is all the more impressive. She always has a quick and witty comeback to the offensive things said to her in an attempt to slut shame her.

Nicollette Sheridan performs Edie in such a way that proves she does not care what other women think of her. In one episode of season three, Susan confronts Edie about their children’s relationship. Edie admits that the two are probably having sex but trying to keep them apart will backfire. While this might have upset Susan, it is absolutely true. Edie was not afraid of being honest about this situation along with many other situations.

It’s fair to say that Nicollette Sheridan’s character Edie is not really thought of as warm and fuzzy. In fact, she often takes on the role of a minor antagonist in the series. However, throughout her five seasons on the show, she shows some major personal growth. There are several times she opens up about her difficult childhood. She also admits she gave up custody of her son because she wanted him to have a good life that she did not believe she could really give to him.

One moment in this series though really shows Edie Britt’s growth. In season four of Desperate Housewives, there is a horrible tornado that hits the neighborhood. In the aftermath, audiences are left uncertain about the fate of certain characters. While Lynette’s husband and children were thankfully safe, Ida (an elderly neighbor) unfortunately died in the storm. Throughout this scene, Nicollette Sheridan is questioning the point of everyone’s thoughts and prayers. However, with the news of Ida’s death, Edie shows a lot of compassion when she holds her neighbor’s hand to comfort her.

Nicollette Sheridan Being Written Off The Show

There is a lot of death in this show. We’re talking one dramatic death after another. It is a constant in the show. After all, the very first episode includes Mary Alice Young’s infamous suicide. However, very few of them even begin to compare to the performance of Nicollette Sheridan in Edie Britt’s death episode. Throughout her death episode, Edie is remembered by her neighbors in good and bad lights. Her death was sudden and very upsetting for many viewers.

Nicollette Sheridan was written off the show after five seasons amidst the legal troubles she had with the production. Despite this early exit, she is easily remembered as one of the best parts of the show.

You can watch the amazing Nicollette Sheridan as the incredible Edie Britt in Desperate Housewives which is streaming on Hulu. You will laugh with her and you will cry with her. Either way, Nicollette Sheridan brings this center-of-attention character to life in the best way possible. One thing is for sure, it is impossible to look away when Edie Britt is on your screen.

A Look At ‘Gossip Girl’ Actor Evan Mock & His Character in The Reboot
10 Amazing Series that Terry O’Quinn Appeared In
What Has RuPaul’s Drag Race Gia Gunn Done Since Leaving The Show?
Damon Salvatore: Top 5 Reasons To Love This Moody Vampire
Everything You Need to Know About Dasha Nekrasova!