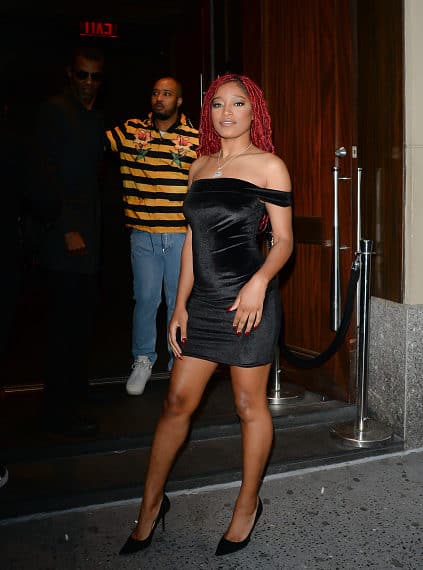 Keke Palmer is here to remind you she is not a little girl anymore. The young actress turned singer recently hosted a listening party at the 40/40 Club in New York City to promote her new album The Boss.

We first met the young star when she played the precocious lead in Akeelah and the Bee. Since the film debuted back in 2006 the 24-year-old has played in dozens of films, appeared on television and was the youngest person to ever host her own talk show. But throughout the years Keke has also dabbled in music and most recently released her new single “Bossy.”

The Jay- Z lounge of the 40/40 Club was packed with media and journalist eager to hear Keke’s new single and indulged in the open bar. Keke collaborated with AT & T for the event who sponsored a photo booth and encouraged guests to take selfies throughout the night.

The night started out really relaxed as guests drank and munched on fried foods (this was not a vegan or vegetarian environment, so my inner carnivore was thrilled). But once the cocktails started to kick in the dj’s of the evening, twin sisters Angel and Dren turned the event completely up. Guests started dancing and before we knew it there was a full on break dancing contest and everyone’s inhibitions were thrown to the wind.

By the time Keke came out to perform her single we forgot what we were even there for. Keke burst through the door full of energy in a little black dress that hugged every curve on her toned frame. She sported long burgundy red faux loxs in her hair which swayed side to side as she performed “Bossy.”

But before the performance began she sat down with Cosmopolitan Magazine’s video director Jason Keler for an Instagram live session. She also had a message for her fans about what they can expect from her in the future.

“I just want my fans to know whether I’m going hard in music or acting, I will always create because I’m a creative.”

After the interview and performance guests poured out of the extremely hot back room and into the hallway. As folks took advantage of the last minutes of the open bar Keke started taking photos with celebrity guests who came to support like female rapper Young M.A and former BET executive Stephen Hill.

Keke’s album The Boss will be released on her own record label Big Boss Entertainment and her single “Bossy” is out now.