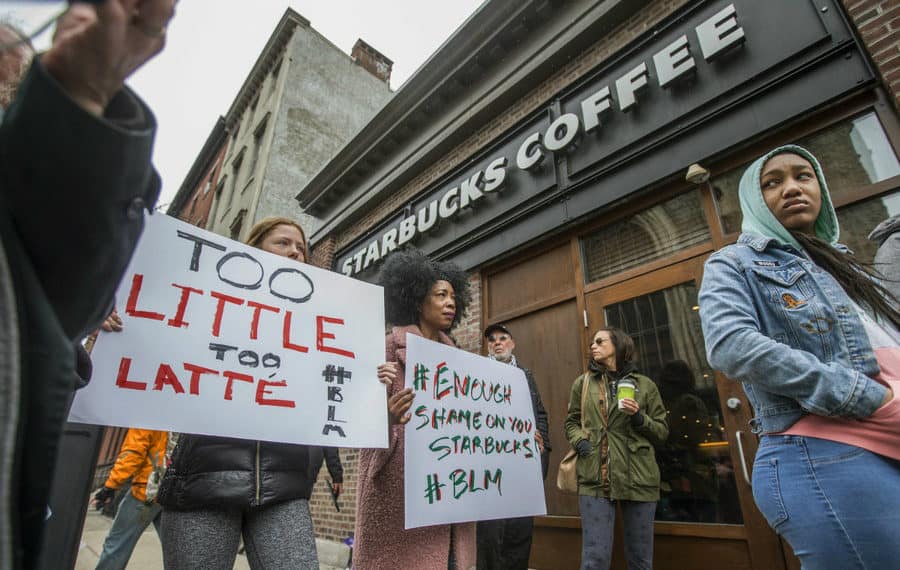 I’ll admit that I’ve been kicked out of a Starbucks before. I was in Williamsburg; my phone was dying, so I went in to charge up my phone a little. One of the worst things in the city is having a dead phone while you’re on the run, especially if you have a long train ride home. I need my music, but anyways. I sat at a small table for about 10 minutes before someone behind the counter told me that I had to go If I wasn’t buying anything.

Honestly, I was shocked by what was happening. There’s about a billion and five Starbucks in the city. I drink Starbucks, but you can usually catch me at a local coffee shop. I mostly go there to use the bathroom, to be honest. They’re one of the only places in the city where you can go to, to use the bathroom without paying first.

“Really?!” Is what I responded with. Then I also asked, “How do you know that I’m not waiting for someone?” I was told that it didn’t matter and that I would still have to buy something while I waited. I’m not going to lie I caught a bit of an attitude and told the employee that I’ve never seen anyone get kicked out of a Starbucks while waiting for someone.

I honestly thought I was being racially profiled. Williamsburg is a neighborhood that’s been gentrified, and you don’t see as many black people in that neighborhood as you would in Crown Heights or in Bed-Stuy.

I decided to unplug my phone and go after I gave my speech. It was mostly because I wasn’t actually waiting for someone. I was there just charging my phone. Although once again I’ve never seen anyone kicked out of a Starbucks or even a Dunkin Donuts for that. I didn’t take it personally, even though I wanted to, but now I can’t help but wonder what if I was waiting for someone?

Would I have still left? Probably not, but then what would have happened next? Would I have been arrested that day? These are thoughts that come into play every time I hear about the two black men that were arrested at a Starbucks in Philly.

What Happened To Customer Service?

Two weeks ago in Philadelphia, two black men entered into a Starbucks for a meeting. Something that typically happens like every day at any Starbucks. While waiting one of the guys asked if they could use the bathroom. He was told no because he hadn’t bought anything. They were both asked to leave due to the same excuse.

The men explained that they were having a meeting and waiting for someone to arrive. The manager called the police, and the two guys were arrested. I’m not an expert on the law, but I don’t remember ever hearing that refusing to leave an establishment was against the law. Sure it’s private property, but everyone involved could have handled it much differently.

Cameras came out and started recording as the police decided to arrest the two men was the best decision. By this time the guy they were meeting was there stating to the police that they were there to meet him. He even asked the policy why they were being arrested in the first place. Officers stay silent as they continued to arrest the second man and escort him out as well.

So not only were these guys racially profiled, they were publicly humiliated, and arrested, which gives them a criminal record now. The black community was furious, and it was honestly nice to see the white community just as angry about it.

Black people love Starbucks, but let’s be honest, there’s always way more white people in line at most stores. With that being said seeing a large portion of the white community vow to stay away from a place that’s been apart of their daily ritual for years was groundbreaking.

I think the question of Starbucks being racist has different answers. It all depends on how you feel personally. I think at this point it’s hard to say that the whole establishment is racist, but there’s no denying that the woman who called the cops is.

There’s been an epidemic of white people calling the police on black people just because they’re black and “afraid.” Although the black community may not be pointing fingers at Starbucks, we are looking to see how they’ll handle the situation.

So far an apology has been issued, the manager no longer works there, and on May 29th there will be a national racial bias training. Before I continue, I want to say that the manager of that Philly location was “fired.” There was a mutual decision report that allowed the manager to “decide” to leave.

These are some pretty nice words, and it seems like the manager is getting off easy. Only thing I can think of is that this method was the safest way for them to fire her without having a lawsuit on their hands.

She’s gone though, and that was one of the biggest issues they needed to take care of. Now, every store will be closed all day on Tuesday, May 29th for new training. It’s been confirmed that there was no initial programming for this training. I believe it because this has all happened so fast. Handling something this sensitive needs proper planning.

It seems as if they’re going to shut down, come together, and say allow everyone to use the bathroom, wifi, and charging stations. This has always been Starbucks policy though, or at least I thought. As I’ve said before that’s the only place I know of in the city that allows you to use the bathroom without buying anything.

I honestly hope this whole situation blows over well, and I mean for the men that were arrested not Starbucks. I’d like to hear how they’re feeling about the establishment right now. At this point Starbucks is doing better than Waffle House though, so we’ll see how much this boycott last, but Starbucks: we’re watching you.