Take a dive into NYC culture with the world of graffiti history! 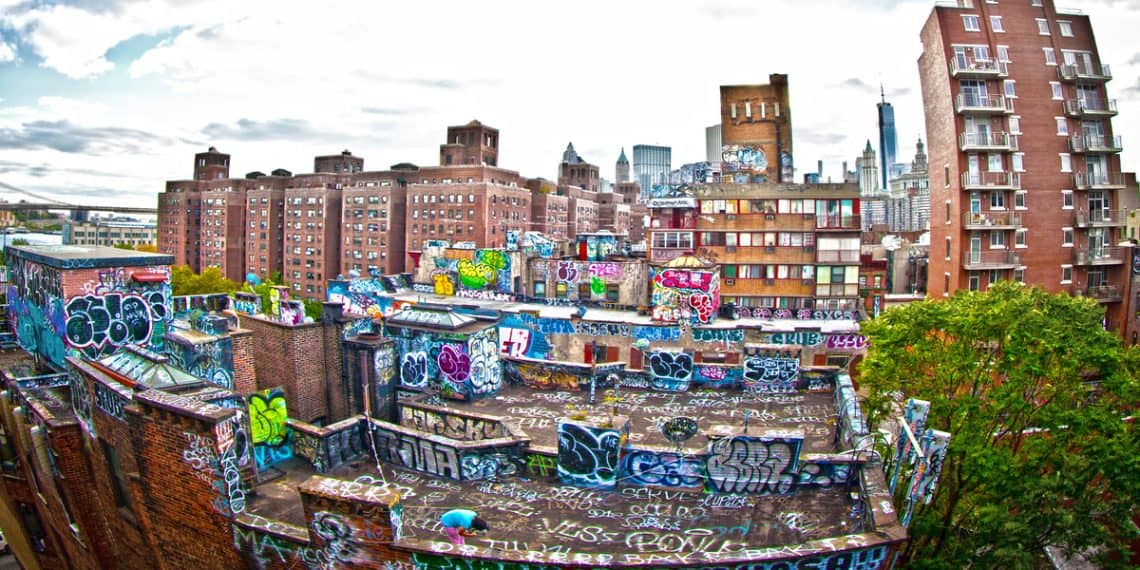 If you’ve ever walked the streets of any city, you’re bound to see a graffiti tag! It’s part of what makes a city a city. And it’s no surprise that New York City has some of the best graffiti art in the world. However, something that I’m sure you may not know is that there is a rich graffiti history in New York.

As with anything, there are trends that come and go when it comes to graffiti art. As the times change, so does the style of graffiti and the way that tags are done.

Because there is such an interesting beginning and past of graffiti culture in New York graffiti history is just one of those topics that makes art so fascinating. Especially when you have the opportunity to speak to someone first hand.

What better way to get a true understanding of something than by getting first-hand knowledge. I had the opportunity to chat with a present-day New York City graffiti-style artist! He has lived in the world of graffiti culture, which gives you only the best insight into graffiti and graffiti history.

The Start of Modern Graffiti

Although there have been different forms throughout time, you could say that modern graffiti really started its story in Philadelphia, in the 1960s and 70s. Around 1970-71 was really when this trend of graffiti writing really started to take on New York City by storm.

Specifically in Washington Heights, taggers such as TAKI 183 and Tracy 168 began to gain recognition for their vandalism work. Together, they helped make graffiti history. In fact, Tracy 168 coined the term “wildstyle” which was a style of graffiti that replaced the classic bubble lettering that was seen in previous years.

As time grew on, graffiti tags throughout New York City began to change in size and style. Artists began adding elaborate elements to their names, such as cartoon characters. However, once the 1980s arrived, a whole new era and style of graffiti tagging would begin to take place.

In 1972, Mayor John Lindsay announced the first war on graffiti. This was a direct result of the increase in vandalism on New York City subway cars. Because of the accessibility and the interconnectedness of the subways, it allowed for a rise in the movement. However, it would be a while before any change would really occur.

As I’m sure you can tell, the style of graffiti today, although it holds some values of previous trends, is much different. Trends in things such as music and fashion have led to such a drastic change in art styles, including street art.

Because there are now certain restrictions and laws associated with graffiti in NYC, there has been a shift in the medium used to create this art. Innovations such as graffiti art on stickers and removable wallpaper have made it possible for artists to continue their craft without getting penalized for it.

However, that’s not to say that classic graffiti doesn’t exist in modern-day New York. In fact, it’s quite the opposite. Artists such as Banksy began to shape the face of modern graffiti and art. Take a look around and I’m sure you’ll be able to find a spot that’s already been tagged.

I had the pleasure of speaking with someone who is more than familiar with style writing in its whole: ACRIME145ER (@studiedunderbrucelee on IG). He is someone that specializes in eighties’ era New York graffiti, and I had the opportunity to ask him a few questions about the life of and graffiti history of New York City!

NYG: How would you describe your specific style/design of graffiti work?

A: My style is eighties’ era New York.

NYG: What/where are some of the best structures to showcase your work?

A: Right now there are not many authorized spaces to paint in new york. Once painted in an authorized spot, it may stay up for a week until the next writers come in and paint

NYG: In your opinion, what about NYC graffiti sets it apart from the rest?

A: In my opinion I would say we had the train era of New York City which made style writing a global phenomenon.

NYG: Who are some of your biggest artistic influences?

A: My influences are REPSTA One who introduced me to style writing. SKEME TMT are style masters of New York City.

NYG: Where/how do you get inspiration for your work?

A: It can be anything from watching a movie to listening to a song. I’m all over the place.

NYG: In your opinion, what have you noticed about the overall changes and evolution to NYC graffiti style?

A: In my opinion, New York hasn’t evolved. Once the trains were stripped from us. The future generations didn’t have that muse of masterpieces being on the trains to influence them. It’s more about street bombing which just involves bubble letter throwies and just having their name all over the place. It’s not about style it’s about just getting up.

If you’d like to view more of his work, check out his IG @studiedunderbrucelee. His art is full of colorful lettering and caricature making it very worth taking a visit.