All you want to know about cutie Dimitri. 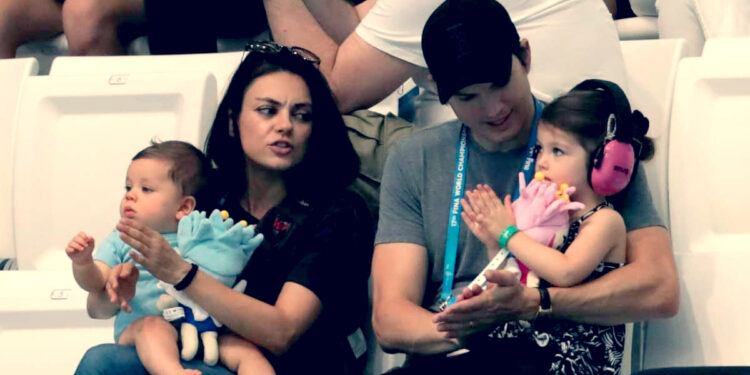 Who is Dimitri Portwood Kutcher

Dimitri was born on November 30, 2016, to celebrity couple Mila and Ashton Kutcher. He is the youngest and only son of the couple. He is the second-born child prior to their daughter Wyatt Isabelle. His famous parents met at a television show. They met dated for a few years and tied the know. Ever since Dimitri Portwood is born, he has always been in the spotlight.

Even though Kutcher and Mila try to hide their son from the media, the paps still capture him. Since his birth social media has tried to cover each and every detail about him. His parents try to protect him at all costs and give him a regular life. They protect their kids from unnecessary media exposure. Ashton Kutcher and Mila rarely update their children on social media.

The Story Behind his Name

There is an interesting story behind his name. His father revealed in an interview that he initially wanted to name him ‘Hawkeye’ after his alma mater ‘University of Iowa’s mascot. But his wife came up with an alternative ‘Dimitri’ and they both liked it very much. The name is a popular one in Russian culture, meaning a ‘follower of Demeter’ and refers to the Greek god of farming and fertility. His first name reflects his mother’s Ukrainian and Russian heritage, whereas his middle name is an homage to his stepfather, Mark Portwood.

Ashton when was in Ellen Degeneres’s show, he shared his thoughts about his son and daughter. About Wyatt he says,

“Wyatt thinks the baby is her baby, and at some point, I’m going to have to explain to her it’s not really her baby. I don’t know how I’m going to do that. She loves the baby so much,” Ashton gushed. “It’s like Of Mice and Men. She’s like, ‘I love you and hold you and squeeze you and name you George.’ I’m afraid she’s like Lenny, like, ‘You’re going to squeeze the baby’s head off, honey!’.

Talking about his son he says,

“I now have a complex about this, because I have one of those hiking backpack things, so I put him in the hiker to go down to the beach so we can actually go down the beach, otherwise it’s a whole wrangling session with the kid,” Ashton continued. “And then you came out and you were like, ‘Oh, does he walk?’ And I’m like, ‘Yes! He walks!’”.

“He loves everyone. Anyone comes near him and he’s like, ‘Hi!'”

Khari Barbie Maxwell: Love Child of Masika and Fetty is Truly a Doll