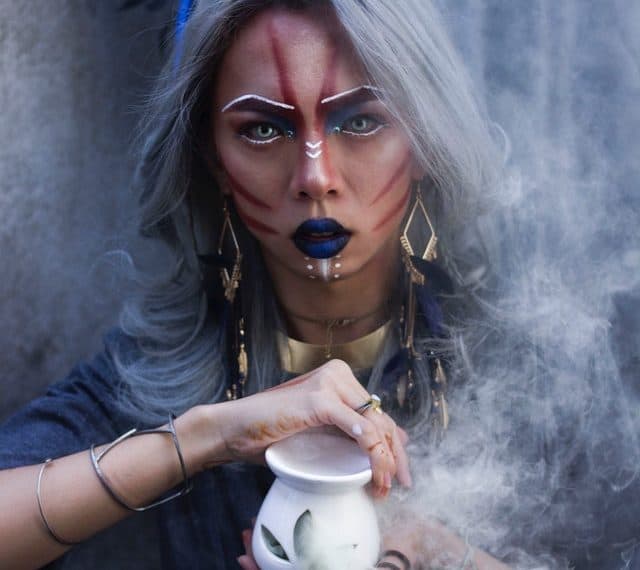 If you have been scrying social media for the perfect witch makeup, then look no further!  We have some of the latest witch makeup ideas that are Big Witch Energy (BWE) and will leave you spellbound.   In case you were wondering, the pointy hat still needs shoes to match: the witchy look is more popular than ever (just revamped).

Hocus Pocus aired a record-breaking 27 times for the month of October, and there is a reason. Witches are the ultimate symbols of feminism; they are empowered through their own agency. The witches’ style is surging in popularity for being both a branding aesthetic as well as a feminist political movement. By the end of this article, you may decide to match your daily makeup to your tarot card reading.

Witches have changed their appearances many times throughout history and pop culture. You might recall the green witches who inspired #flyingmonkeysquadgoals or the British ones who toted magical carpet bags. Then, of course there were those who were burned at the stake for hearing angels.

You might be better acquainted with today’s witch. She can be seen shopping on Etsy for anti-patriarchy pillows or juicing drinks enhanced with moon dust in a tank top that says affectionately “basic witch.”  This Halloween you might notice some similarly evolved witch makeup looks, like painted moons, third eyes, and spider eyes (see below).

This witch aesthetic or basic witch is here to stay according to Mashable’s (2017) article “Meet the ‘basic witches’ who are moving witchcraft into the mainstream.” Spirituality and witchcraft are a part of a ballooning wellness industry, estimated to reach near trillions by the year 2021. The article explains, “What makes the basic witch different from earlier breeds of witches is her commitment to spirituality,” Urban Outfitters sells tarot and spell books, and you can purchase crystals at Target.

However, Sephora was asked to recant their collection of “Starter Witch Kits”, as real witches took offense to the flippant dabbling of witchcraft. Urban Decay also received a lot of backlash for cultural appropriation when they released “Elements,” an eye shadow palette adorned with sigils (magical symbols).

You no longer must practice witchcraft to embrace your inner witch or subscribe to any one style like Gothic, bohemian, or femme. “Almost any aesthetic can be turned into a witch aesthetic if you try hard enough,” according to Vox’s “Lorde is the celebrity avatar of pop culture’s witch obsession” (2018). The runway mirrors this notion. Michelle Duncan at the 2019 fashion week called her premier collection “Gothic gone corporate.” The models gave off major witch aesthetic vibes dressed as full-grown Wednesday Addams in Prada combat boots, Victorian lace, and red oxblood lips.

Patriarchal thinking would have women believe makeup and beauty are trivial, but witches are empowered by changing their appearances. Fashion and makeup are considered “glamour magic” when applied with intention.  A deep red or noir lipstick is the best instrument for centering and self-love.

Oddly enough the word ‘glamour’ was derived from English by the Scots and meant to ‘cast a magic spell.’ In an interview with Time, “Yes, Witches Are Real. I Know Because I Am On” (2019), Pam Grossman, host of the podcast “Witch Wave” says “I learned that women could lead a revolution while wearing lipstick and combat boots-and sometimes even a cloak,” A good microblading is also essential to leading a female revolution. If you do not believe me, catch old Hollywood actress Veronica Lake in I Married a Witch.

If you need witchy makeup, Lunar Beauty dropped Manny MUA’s “The Moon Spell Collection.” The kit has three lipsticks and an eye palette in 15 shades named after everyone’s favorite witches.  Are you a Hermione, a Sanderson sister, a Halliwell, a Kiki, or even a Marnie? (Yes, they have a shade for Marnie from Halloween Town!) The palette is cased in a book meant to look like Charmed’s Book of Shadows and costs $80.00. (It is expensive to be a human-witch.)

Below are 11 witch makeup looks for your inner witch. Go ahead, glamour away.

Forget flower crowns, a Hedgewitch has all of your nature vibes. This look is super cute, and you did not have to copy an Anthropology model. Hedgewitches traditionally lived on the fringes of society and a deep understanding of herbal magic. For the eyes, blend forest green, yellow, copper, and a brown shimmer. Use an eyeliner, to draw some natural freckles and fun shapes like a five-point star. For the felt hat, incorporate both real and fake flowers into the brim. Don’t forget a witches most important herbs: mint, lavender, and rosemary.

Be dramatic with different shades of green for the face.  Use a face paint like Mehron‘s “Fantasy FX Face Paint Tubes” ($8). Blend a deep violet with some sparkle and black for the eyes.  For some delectable black lips, try Necromancy Cosemetica’s “Morgue” ($16).

This Third Eye Witch look is giving off glam witch and Aladdin Sane vibes, and we are here for it. Find a good eye primer like Urban Decay’s “Primer Potion” ($24).  Your eye palette should look like a sunset with colors: orange, red, yellow, white, and blue.

The Sabrina witch makeup is simple and wicked. A headband, fake eyelashes, pink or red tinted eye shadow, and a wine-colored red are all you’ll need.

It is all in the eyes. Pinky Paradise has plenty of colored contacts styles to choose from.  For pink contacts “EOS Fairy Pink” is a winner.

Bat them eyes with a quality eyeliner like Kat Von D’s “Tattoo Liner” ($20).

A forest witch is the lore of fairy tales.   Extenuate your brows with a good brush. Create a smoky eye with burnt oranges and browns for an earthier look.

Get creative with your eyeliner.  Why paint freckles when you can have delicate bats?

The moon witch is next level. An attention to ancient symbols will earn you high priestess praise.  Find a silky grey wig to complete the look

This look is stunning and will reveal both your witch and inner goddess.  You will find some truly beautiful and intrinsic makeup looks at @sounthie. You can purchase the gold tattoos at Essence Cosmetics.

8 Tips for Making a Career Change at 40

The Spiritual Meaning of Pregnancy in Your Dreams