Why We Should All Be Talking About Endometriosis 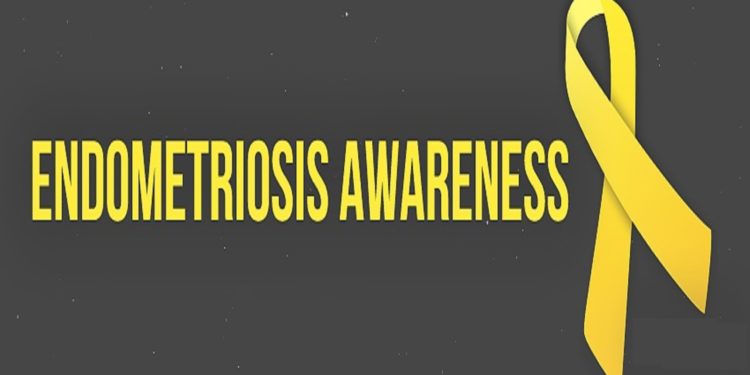 Everyone in this world is affected by endometriosis in some way. You yourself may not have it, but NYgal can guarantee that someone in your life is negatively impacted by it- whether that’s your mother, daughter, aunt, friend, teacher, barista, wife, cousin, coach… you get the point.

We can also guarantee you don’t talk about endometriosis (or periods and pain) at the dinner table- but you should.

Because your loved ones are suffering in silence. Sometimes the world isn’t ready for women to talk about their pain. Break the cycle and do it anyway.

So, What is Endometriosis? This displaced endometrial tissue continues to act as it normally would in a healthy person — thickening, breaking down and bleeding with each menstrual cycle. Because this tissue has no way to exit the body, it becomes trapped.

When endometriosis involves the ovaries, cysts called "endometriomas" can form. The surrounding tissue may become irritated, eventually developing scar tissue and adhesions, which are abnormal bands of fibrous tissue that can cause pelvic tissues and organs to stick to each other.

The result of all this is often a lot of pain — sometimes severe — especially during periods. Fertility issues may also develop. Rarely, endometrial tissue may spread beyond pelvic organs which can cause a host of other problems.

What are the Common Symptoms?

The most common symptom of endometriosis is pelvic pain, often associated with menstrual periods. Although many women experience cramping during their periods, women with endometriosis typically describe it as the pain that increases over time and is far worse than usual. Some women’s pain may last beyond the active bleeding phase and be present all month. Other symptoms include (but are not limited to):
Dysmenorrhea (Painful Periods)
Pain with intercourse
Pain with bowel movements or urination
Excessive bleeding
Infertility
Fatigue
Diarrhea
Constipation
Bloating
Nausea

How is it Diagnosed and Treated?

Interestingly, pain isn’t always a great indicator of this disorder. Some women with mild endometriosis have intense pain, while others with advanced endometriosis may have little pain to no pain at all.

Because these symptoms can be so broad and vary from person to person, endometriosis is often mistaken for other conditions. These include pelvic inflammatory disease, ovarian cysts, and irritable bowel syndrome, among others. It can also occur simultaneously with other gynecologic problems, such as adenomyosis and fibroids.

Treatment options include pain medication, hormone therapy, and occasionally surgery, which is only used as a last resort.

Why is This Important?

Sometimes the symptoms don’t go away, even with these measures in place. For example, undergoing a total hysterectomy (removal of the uterus and other related structures) is not a guarantee of a pain-free life. Scientists aren’t even sure why the disorder occurs–there is a severe and fundamental lack of ongoing endometriosis research. And yet, 1 in 10 women are thought to be afflicted by endometriosis and even if a woman is actively seeking a diagnosis, it can take as long as a decade to figure out what’s wrong.

Ten years of fruitless doctors appointments and money loss due to expensive testing.

That’s also ten years of feeling like a lost cause because many women-patients are treated like their pain isn’t real.

You have probably heard stories where a doctor didn’t believe a woman until her husband/father/brother/uncle came into one of her appointments.

Or maybe you’ve heard of women’s chronic pain being mistaken for a psychiatric condition.

There is also the case of doctors thinking fertility comes above everything else, including the patient’s own wishes.

Abby Norman, an outspoken patient, author, and advocate for endometriosis awareness has plenty to say about this. In an article she wrote titled "Women’s Troubles" for harpers.org, she says:

"My doctor emphasized to me that any procedure involving my reproductive organs could threaten my fertility. I didn’t want to have children, so damage to my fallopian tube didn’t concern me. The costs that did concern me—the pain, the nausea, the loss of activities I loved (eating, dance, sex)—didn’t seem to concern my doctor. Why didn’t my plight hold as much weight as that of a woman who wanted to have children?"

Doctors must begin to put more value on taking concerns seriously because women are SO much more than their ability to physically have a child. They are not "crazy" and they know exactly how they feel.

Endometriosis is often silent: sufferers don’t lose hair, aren’t wheelchair bound, and don’t stay in bed all day. They have a way of putting on a mask- one that makes them look as if they’re okay. They are not okay.

To quote Abby one last time:

"When you talk to the women who have had endometriosis, you will find that it isn’t that the disease is silent but that no one is listening."

So let us be the ones who start listening. Resources for You:
Endometriosis Foundation of America
Mayo Clinic
AbbyNormanWriter.com

Featured Image Credit: TheEndoTheWorld.com article titled "March is Endometriosis Awareness Month: This was mine in 2016."