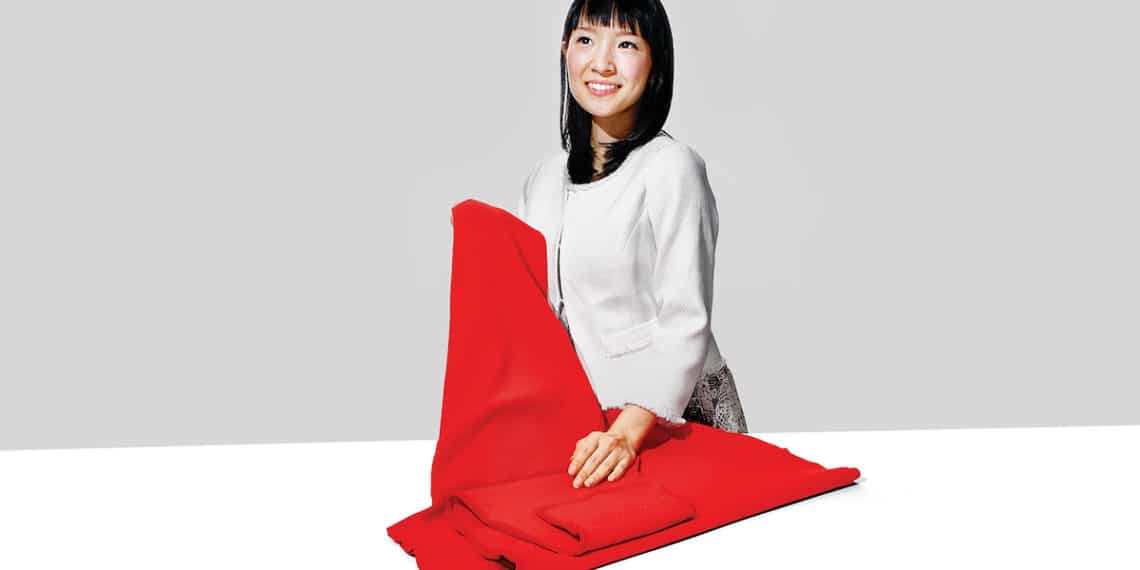 It’s been a few weeks since Netflix gave us the gift of streaming Tidying Up With Marie Kondo, a show that not only allows you to binge-watch but to actually take something from it. Namely: How to organize your stuff.

Tokyo born Kondo began cleaning up for friends as a student at university when she was 19. Since then she has released a New York Times Best Seller book, The Life-Changing Magic of Tidying Up and has built an empire on her ability to minutely fold, separate clutter from necessities and bring harmony into homes.

And, now, she is bringing the Konmari method to us directly through Netflix. While we love everything about her and her method, here are just some of our favorite tips from the show. Incorporate these into your life just in time for some spring cleaning, or for a clear mind and closet. You really don’t need 40 pairs of shoes.

Greeting and Saying Thanks To Your Home

There’s something so wonderfully pure about Marie Kondo. She moves, talks and seemingly thinks like a Disney Princess. There isn’t an ounce of malicious energy in her. Which is why she treats everything, even inanimate objects, as if they are sentient beings, by acknowledging their purpose and joy they bring. In each episode Kondo kneels in the chosen house and does this, even inviting the residents to join. Try this yourself, by greeting your house and thanking it, for even if it’s small, it’s a space that is yours and one that keeps you safe and warm.

Start With The Clothes

Clothes are by far the things that we have too much of and take up the most space, that is, apart from furniture. I have so many clothes that sometimes I forget about an item until I re-discover it. Really, I don’t wear half of my clothes and keep most of them “just incase”. By piling them all of the bed a la Konmarie, every single one, it can make you realize just how much stuff you have- and don’t need.

If we need to, we can find an emotional attachment to everything we own, because it’s ours. We wore it, or didn’t wear it once. But, still, there’s a story to it. Some will have happy memories attached to it, others less. Marie Kondo’s method aims to make de-cluterring easier by only keeping what “sparks joy” and brings you happiness. Pick up each item and let your heart tell you what you feel. If it’s joy, keep it, if it isn’t, say thank you and throw it away.

It’s mesmerizing to watch and surprisingly therapeutic to do yourself. Plus, having perfectly stacked clothes in your drawers will make you feel like you almost have your shit together. Even if it only goes as far as clothing. For other items that aren’t t-shirts watch this Refinery29 video of Kondo folding everything from socks to robes.