The Scoop on the First NYC Underground Little Free Library 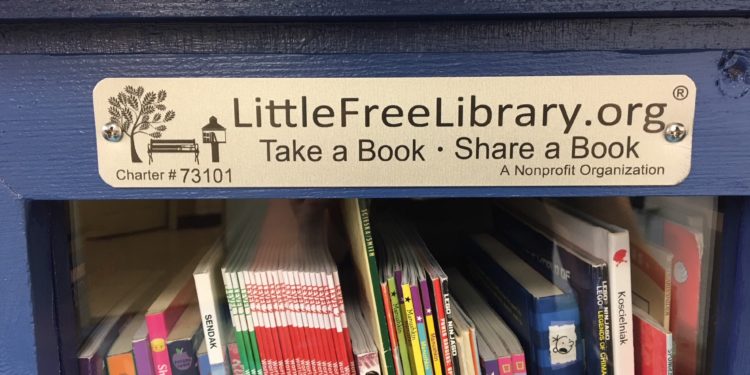 Hidden behind the doors of Transit District 3 at the ABCD subway station at 145th St and St. Nicholas Avenue, lives a little blue library, filled with stories of superheroes, growing up, and mystery. All it takes is a question at the front desk for this treasure trove to be unveiled.

The project stemmed from a meeting between Heather Butts, co-founder of Health for Youths, and Officers Joseph Belokopitsky, Auxiliary and Explorer Coordinator, and Damieon Frey, Community Affairs Officer, at one of Transit District 3’s officer meet-and-greets with the community. Butts had started nine similar Little Free Libraries at precincts, parks, public spaces, and outside corporations around Staten Island, but this is the first of its kind in the New York City transit system. When Belokopitsky and Frey visited one of the Staten Island locations, personnel from the non-profit Little Free Library were interested in discussing the first underground spot with the two officers.

Not only is this the first underground Little Free Library, but it also has a superhero benefactor – Disney’s Marvel Entertainment. So far, Butts has really enjoyed reading the Dr. Strange books Marvel has sent over, while Belokopitsky is excited that Katie Woo, a local author, dropped off her own books to join the library’s collection. All of the books are for readers to keep or return at their leisure, and readers and authors alike are welcome to add stories of their own to circulation.

As further proof of the library’s uniqueness, the MTA pitched in and created a one-of-a-kind stand for the library. “The Little Free Library as it came, when they shipped it to me, was the top part, it didn’t have all that amazing stuff on the bottom,” said Butts. That ‘amazing stuff’ he refers to is the cart, which allows the library to be mobile and provides extra book storage space.

“We have a good relationship with MTA because we work in the transit system and they have really good carpenters, so they actually built that bottom cart,” continued Belokopitsky. “It’s easier for us to wheel it in and out of the precinct to do those events with the kids and store books in if we happen to have an overflow of books.”

The three agreed that their ambitions for the project are to inspire more kids to enjoy reading and open dialogue between police and the communities they serve.

“One of the things I wish I did more of was read, and if [Belokopitsky] and I can get children to make it a habit, especially as we become more dependent on these electronic devices, if we can get a couple of kids to be readers, that’s what my aspirations for this project are,” said Frey. “Another goal of ours is to make children feel comfortable talking to police, not as either an authority figure or something they have to stay away from, but someone that can be friends with. Pretty much all of our programs and events are based on helping the youth.” In addition to the Little Free Library, Butts, Belokopitsky, and Frey have had a very successful partnership, collaborating on other various events for the community, such as 5K races, gardening in local parks and toy giveaways with neighborhood churches.

Officers Belokopitsky and Frey even have plans to feature the library by hosting readings with neighborhood kids twice a month outside of the precinct. You can find information about upcoming events with the Little Free Library by watching out for updates on the Health for Youths social media channels. Stop by these events for a bag of freshly popped popcorn and ask for Officer Belokopitsky and Officer Frey!

These Destinations Will Make You Want to Book a Trip Asap