Why you'll be dying to get your hands on a copy of "Becoming". 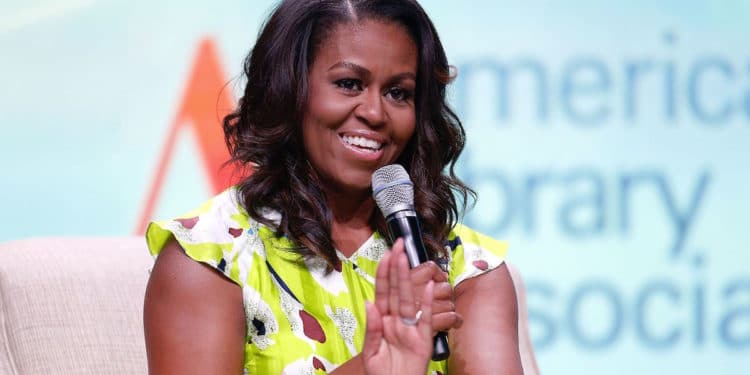 Do you miss the Obamas? We do too.

They’re still around though if you’re following. After a much-needed family break from public life, that brought us those photos of Barack Obama kitesurfing, the former POTUS and FLOTUS are back to being their usual busy selves.

In the build-up to the mid-term elections, Barack Obama appeared and spoke at several Democratic rallies, saying he:

As for Michelle Obama, she has been busy writing her 400-page book, Becoming.

Judging the cover first, the book features a glowing, blissfully happy Michele with tousled hair and glossy lips. She looks great with her one shoulder exposed and, the other in what looks like a loose fitted top, relaxed.

With the number of political books that have been published this year and during Trump’s administration, a break from the “dark truths” of what is going on in The White House right now, is maybe what we need.

Michele simply wants to tell her story, of her childhood, marriage and life she led in one of the most known addresses in the world.

On the book’s website, it’s description is as follows:

“In her memoir, a work of deep reflection and mesmerizing storytelling, Michelle Obama invites readers into her world, chronicling the experiences that have shaped her—from her childhood on the South Side of Chicago to her years as an executive balancing the demands of motherhood and work”

And, who doesn’t want to know about what we didn’t see during the life of a FLOTUS? Especially, Michelle’s.

In the eight years of the Obama administration, the country got to know the Obama’s. Much like any other family in The White House, they were willing to share. Malia and Sasha grew up. Barack went grey. Michelle’s arms remained as toned as they always have been.

But still, the president, after all, was Barack and as much as he was inclusive in sharing his limelight with his wife, most of the focus was predominantly on him.

In what is her most reflective book to date, she looks back in detail on certain moments that we were, or felt at least, to be part of. Like when Barack won the 2008 election. She admits that she never believed he become president.

“Barack was a black man in America, after all. I didn’t really think he could win.”

Although she supported him and helped him throughout the campaign, Michelle was pessimistic about the public’s choice and politics in general.

“The rumors and slanted commentary always carried less than subtle messaging about race, meant to stir up the deepest and ugliest kind of fear within the voting public. Don’t let the black folks take over,” Michelle writes.

She also confirms some racist comments that she most definitely heard, such as when “a sitting US congressman … made fun of my butt.”

Her book lets us further into the much celebrated Obama love story. From their first meeting, a heartbreaking miscarriage and her knowing of being married to such a powerful person. While the Obama’s have a visible great deal of respect for one another, having something people are calling a “seesaw” marriage, she was willing to put her career on hold for Barack.

“He saw marriage as the loving alignment of two people who could lead parallel lives but without forgoing any independent dreams or ambitions. For me, marriage was more like a full-on merger, a reconfiguring of two lives into one, with the well-being of a family taking precedence over anyone agenda or goal,” she writes in the new book.

On a more disappointing note, she finally reveals that she isn’t running for president in 2020. We might cry.

The book was released on Tuesday. It is being sold at most booksellers, like Barnes and Noble, Amazon, Target, Walmart, and Audible.

For bigger fans, Michelle is also going on a book tour. Her schedule, posted her, lists her NYC dates as the 1st and 19th of December. I assume tickets will sell fast, too, so get them now.