Holiday Gift Ideas for Your Bae 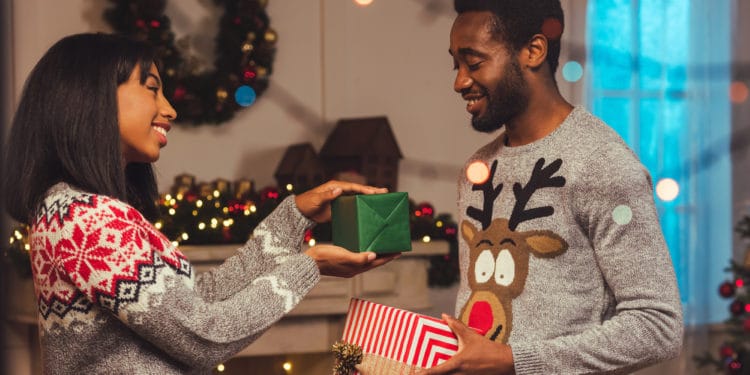 There are 28 days until Christmas. Which means if you haven’t already started thinking about what gifts you are going to get for your friends and family, you probably should.

Buying gifts for some people is fun. They’ve mentioned what they want all year (deliberately or not) and now whatever that is has been reduced. In that case, the most difficult thing to do is trying to keep it a surprise.

For some people that don’t seem to want anything and have everything, buying gifts is an anxiety trigger. There’s a certain pressure, too, with buying gifts for a significant other. It can vary on if they are extravagant or extra thoughtful and you’re not. And, do you buy your boyfriend of only a few weeks something expensive if you’re not sure he’s going to get you something equally as nice?

Obviously, that’s not the point of gifts, but you don’t want to scare anyone off or out-present someone when all they got you was a Starbucks gift card. There’s no guarantee that your SO will love what you buy. You can still try though!

Ask his friends and family for advice. Listen to what he says and try to notice little things that will show him how thoughtful you are. If you’re completely out of ideas, first of all, you’re not alone and secondly, here are a few ones that might be perfect or at least get you thinking.

Does he DJ (if he does, we send our condolences)? Does he like working out? Or hiking on the weekends? Does he brew his own beer (again, we’re sorry)?

Think about what he likes to do in his spare time and see if he needs a new pair of headphones or work out clothes. To be sure he likes it, stick to a similar style or brand that your SO is currently using and seems to like. You don’t want to get him Nike if he’s a passionate Adidas fan.

See Also: Christmas Music to Light up Your Holiday

Unless your SO isn’t a fan of crowds and having no voice the next day, you can rarely go wrong with a concert. It’s easy enough to know what kind of music someone is in to; Just ask them. People always want to talk about why their music is better and introduce you to it, so mentally take a few names down and see if they’re playing near you a few months from now.

Tip: Make sure it’s not an awkward time or place and work out how to get there before buying them so that transport and life won’t make it a hassle.

Unlike the concert, you might not want to go and watch his favorite football team play outdoors in February. If that’s the case, buy him and his closest friend or dad tickets to go and have a “guys day” by watching sports and drinking beer in minus 5 weather!

We know we joked about the Starbucks gift card before, but some gift cards are an easy idea that will most likely have a positive response. If you know he drinks 100 coffee’s a day from Starbucks, maybe it is a good idea to get him a gift card from there?

Other places that are good for gift cards are his favorite clothes, shoe or online shop.

It isn’t the most creative of ideas, but it will allow him to get what he wants. Plus, if you haven’t been dating for very long and don’t know too much about him, this will avoid you messing up and him having to pretend to like something.

Plan a weekend away. This is probably better for long-term relationships but could be a good way to get to know each other a little better outside the city.

Even if it’s a couple of nights away upstate, a romantic trip away will give you a break from everything while spending quality time together. You could even go a bit farther and plan a trip to another city or state.

Or, a few good books. If your SO likes to read buy him a bunch of books that you’re sure he hasn’t read. Like music, people love talking about what books they like, so it shouldn’t be too hard to get some information out of him.

Make sure you remember some of his favorite authors or genre and then go on Amazon and look at the “people also bought” section. It’s usually pretty accurate in terms of similar types of books. It will save you the trouble of having to figure out which ones to buy.

Skip this if he doesn’t have a record player, or maybe that could be an idea. There are cheap ones on Amazon, eBay and at Flea markets for around 30-60 dollars.

Buy your SO a few of his favorite albums on vinyl. There’s something special with having tangible music and records usually come with a digital download code now.

A watch is one of the most classic and reliable, crowd-pleasing gifts for every guy. From stylish to functional, getting your man a watch is a timeless and memorable gift he is sure to appreciate.

A classic “guy gift” is usually a wallet, a whiskey (or any liquor) glass or a nice pair of slippers. Think of things you’d get your dad, that are timeless and that most guys need.

If he’s still using a velcro wallet, you should probably be thinking about things that don’t include Christmas present ideas. But, if his wallet is looking a bit worn and torn, get a nice vintage leather one for him. Or, if he’s into a particular designer (and things are more serious) get him one of those.

A good gift with a bit of variety would be to get a collection of little gifts such as these.

Is your SO into his skincare/shaving routine? Or, maybe he isn’t and you’re tired of being scratched by his beard. Buy him a nice little care package complete with razors, aftershave, and moisturizer.

Amazon and even Sephora have great deals for men’s skincare.

You could even pop a nose trimmer in there too.

This will save you money and be an on-going creative project to unwind after a long day.

There are hundreds and hundreds of sickening creative ideas on Pinterest and other DIY enthusiastic sites.

Some include making an “us” scrapbook, a “love coupon” book, a “reasons why I love you” note jar and other projects involving glitter, glue, and sharpies.

Cute Office Decor for Those "work from Home" Snow Days