Covid-19 has spotlighted food insecurity in New York City, and volunteers are needed more than ever to help. We caught up with one such volunteer to chat about the call to action. 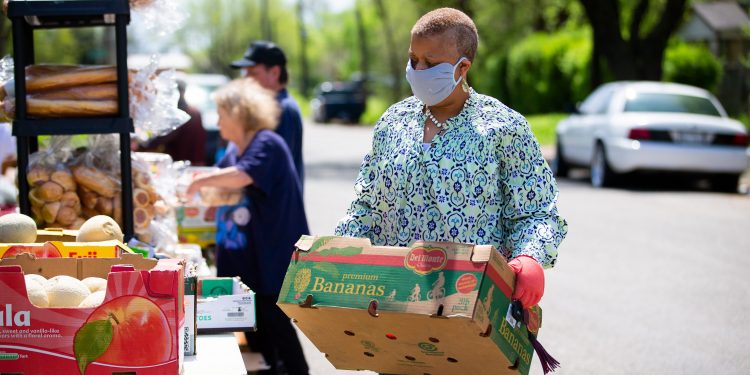 Urban hunger is a city-wide (and national) problem. The sweeping effects of Covid-19 amplified this problem across the city. NYC food pantries are doing everything they can to meet the rising demand. With people out of work, working reduced hours, and receiving little government assistance, more is needed to help.

However, many food banks are in precarious situations, themselves. They are struggling because of the pandemic. Many of their distribution partners have shut down. Or, they themselves shuttered their doors. In May, Mayor de Blasio shared a number since-quoted many times: 1 in 4 New Yorkers–or two-million residents–face food insecurity due to Covid-19. We must do something.

The Facts About Urban Hunger and Covid-19

The Bronx and Brooklyn are expected to see the largest increase in food insecurity. They are both projected to rise by about 5%. The June report from the Food Bank for New York City found 79% of New Yorkers traveled from other boroughs to access food banks, further highlighting the disparity across neighborhoods.

Even before the pandemic, urban hunger in NYC was a massive problem. One of the reasons the mayor hesitates to close schools for snow or other weather-related events is often because he knows some children only get “one hot meal a day” at school. I can’t count the number of times I’ve heard the mayor say this in a press conference over his tenure. This knowledge also factored into the decision to end the school-year early when Covid-19 struck. Children are especially susceptible to food insecurity since they rely on their parents and caregivers for their meals. However, low-income and working-class adults are also vulnerable.

I spoke with a current volunteer with the Campaign Against Hunger. Leo*, a New Yorker in his mid-twenties, tells me part of the reason he is volunteering stems from knowing what it’s like to make the choice between food and rent. “When I first moved to New York [several years ago], I struggled to feed myself and pay my bills for a while.” His voice wavers when he says this as if the memories still sting. The impression it made on him is evident in the conviction that characterizes him throughout our conversation about urban hunger and his volunteer work.

Food banks across the city are reporting dramatic crowds and long lines. Folks are lining up at six, five in the morning to snag a spot near the front. Food charities frequently run out of food before they can serve everyone waiting. NYC food banks that can spare it have increased their hours to try and accommodate the need.

Campaign Against Hunger, where Leo is volunteering, boasts a running counter on their website showing more than half a million people helped since March, and over seven-million meals distributed.

Government assistance has also been needed to help combat urban hunger. New York City started delivering meals to peoples’ homes with the help of Taxi and Limousine Commission drivers. If anyone needs to order food, review the eligibility criteria to determine if this something that can help you. Additionally, the city established free Meal Hubs to help feed New Yorkers.

New York’s immigrant population has largely been excluded from the Covid-19 economic relief programs. Statistically, they tend to live in lower-income neighborhoods that have been hit hard. Hunger and food insecurity breeds a lower immune system and thus exacerbates the problems in communities.

“The need is really large, and it’s very easy tasks to do.”

When I ask him what he’d say to anyone who isn’t sure if they should volunteer, he pauses before responding. And when he finally does answer, it seems so obvious. “The need is really large, and it’s very easy tasks to do.” This simple line resonated deeply. Perhaps the most grueling part of volunteering is standing for periods of time and lifting occasionally heavy boxes. But this is all work most people can complete, and for only a few hours of work, it isn’t impossible.

“Having over forty-million people out of work, food insecurity comes up quickly when budgets are tight,” says Leo, referencing the toll of the pandemic across the country. “I grew up in a family that was struggling to make ends meet. My mom would work for the local food bank and bring home food for us, as well. So she [helped] other people get food but then part of the reason she worked there was because we needed food. A big reason for me [to help] is just knowing that insecurity has peaked.”

Leo personally has a strong connection that makes empathizing easier to the plight of urban hunger. Now that he’s not struggling in the same way as when he was younger or when he first moved to New York, he is happy to pay it forward by volunteering. Even if not everyone grew up dipping “in and out of poverty” like Leo, hunger (to a degree) is a universal feeling. That alone can help anyone relate to the situation we are in.

And it isn’t going away any time soon. The economic effects of the pandemic will last long after a vaccine is created and distributed. Food banks are adjusting to this new normal in real-time, doing the best they can to find sustainable ways to operate for the long-term.

See Also: 5 Amazing Brooklyn Coffee Roasters You Must Know About

“When you give someone food, it’s so pure in its intention.”

To begin volunteering, Leo made an account with City Harvest. From there, he discovered the Campaign Against Hunger was a partner organization in need of help. He completed an hour-long virtual orientation, which he praised for its ease. After that, he had access to a flexible volunteer calendar that allowed him to choose which shifts suited his work schedule.

As our conversation draws to a close, Leo draws increasingly introspective, as if reflecting on his experiences has made him ponder them more deeply. “I’d like to think even without [partaking in charity as a child], … seeing someone in need for such a basic thing as food [would stir me to act].”

In thinking about what people need to survive and thrive, food is the most important. “I’d put it above shelter and fellow connection with humans,” says Leo. “[Food] is the base of everything. You can’t form social connections if you’re starving. And it does not matter if you have a roof over your head if you’re not eating.” He encapsulates it so succinctly it is clearly something he’s been ruminating on for a long time. Perhaps from a young age, as his experiences shaped him.

“Food is just so fundamental and so almost incorruptible in a way. When you give someone food it’s so pure in its intention.” Giving someone food is about nothing else but nourishment. It’s about care and health. “It’s not like giving someone money or even […] a place to stay.” There is never the expectation of return when giving food. There’s no chance of getting it back either, so no ulterior motives go along with it.

It might be one of the greatest acts of love we can do as humans.

If you can’t volunteer or your chosen organization is not taking volunteers at this time, please consider monetary donations. An exhaustive list of different organizations can be found online, but here are some operations that can use your help.

Food Bank for New York City – Not taking volunteers at the moment, but accepting financial contributions.

City Harvest – Accepting donations, volunteers, and has products for sale on their website of all sorts where proceeds go directly to funding the organization

GrowNYC – The team “launched a free Emergency Food Box program for low income, undocumented, unemployed, or otherwise struggling New Yorkers who need food for their families.” Donated funds will be matched by a Bank of America contribution.