Healthy, vegan-friendly meals that are quick to assemble. 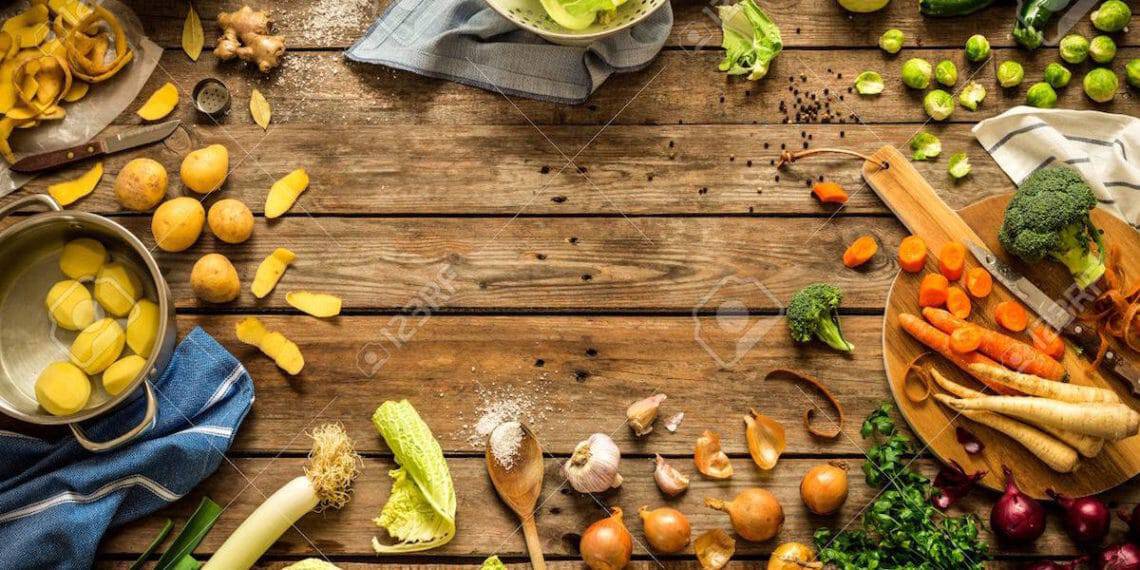 If you haven’t caught on yet, NYGal isveryexcited about autumn. We’ve made a playlist and now we’re listing our favorite recipes for the season.

In the cooler months we tend to crave more filling meals and unlike in summer, a salad isn’t enough to sustain us all the time. However, if all you’re eating is hearty, carb-heavy meals, it could actually have an adverse effect on your energy levels and make you even more lethargic- and craving more potatoes, bread, pasta, and cheese. Lots and lots of cheese.

Obviously, we need carbs. They provide us with energy and should be regularly included in our diet. But there are different types of carbs: Whole and refined.

The latter being those that are in the “less healthy” category and include white bread, white pasta, chips, fries and other things that are equally as delicious.

“tend to cause major spikes in blood sugar levels, which leads to a subsequent crash that can trigger hunger and cravings for more high-carb foods.” They also lack essential nutrients and are known as “empty calories”.

On the other hand, some carbs, namely whole, are good for the body and act as slow releasing energy and leave you feeling full for longer. Brown pasta and bread, legumes, vegetables, and grains are all part of the whole carb list.

So NYGal has put together a bunch of filling yet, healthy meals that won’t take too much of your time to make either since they can be made in a crockpot! Oh, and they are all vegan, too!

Pumpkin spice season is upon us, as is the pumpkin itself. This recipe is super easy and doesn’t require too many ingredients. You can either buy pumpkin puree to save time or bake the pumpkin prior to putting it in the crockpot. Another optional step is to puree the soup after it’s finished cooking or leaving it as it is.

Heat a pan, add the olive oil and cook the onion and carrots until soft, eventually adding the garlic until golden. Season with spices and transfer to the crockpot with coriander, liquids, pumpkin, and nutritional yeast. Cook on Low for 8-10 hours or High for 3-4 hours.

Tip: If you used a whole pumpkin save the seeds and roast for a garnish on the soup (or buy already roasted ones from the store).

A spicy, warming meal can be exactly what you (and your body) need after a long, tiring day of work, especially coming home when it’s already dark. All you want to do is take off your makeup, your bra and relax. Which is why crockpots are so essential if you’re a working person who hates having to cook for hours once you’re home. This one is full of vitamins and flavor and will leave you very happy. Eat with brown rice, quinoa, couscous or on its own.

Similarly to the last recipe, start by lining a pan with the olive oil and start cooking the onion. Proceed to add the garlic towards the end and add the softened vegetables to the pot. Drain the chickpeas and add, along with the vegetable stock, coconut milk herbs, and spices. Finally, add the chopped chilies. Cook on High for 2 hours of Low for 4 hours.

This recipe is one that my mother made for me whenever I was sick and home from school. And since I became a vegetarian over two years ago, it’s become a staple part of my diet during the week when I don’t want to spend forever making something.

Plus, I know I’ll love it and it will remind me of being home. It’s full of fiber and good stuff that will make you feel full and won’t make you feel guilty. If you do want something to dip into it though, try a pita bread with some hummus and a salad on the side. You’ll be surprised how full you’ll be from the soup. Like the soup from the first recipe, try blending it for a smooth soup or leave it as it is.

You know the drill. Soften the onion, carrots, and garlic in olive oil. Remember to add garlic last in case you burn it. Move to crockpot with stock, spices, herbs, and lentils. Stir together and grate the zest and ginger into the pot. Cook on the low setting for 8 hours, or until lentils are tender. Serve with a squeeze of lemon juice and chili flakes.

This dish takes less than 10 minutes to prep for. In lieu of meat and refined carbs that you might be craving on an autumn night, the black beans will act as a “meaty” texture in this chili. And the quinoa will act as a lower calorie replacement to rice. Like all the recipes here it’s also full of vegetables to give you all the vitamins and proteins you need.

Chop all the veggies and add them straight to the crockpot. Cook on low for a few minutes and then add the remaining ingredients. Cook on High for 3 hours or on Low for 5-6 hours. Serve with a side of guacamole and vegan (or regular) cheese on top. 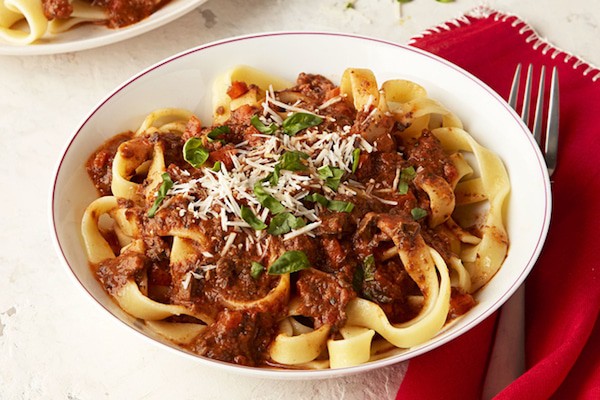 This mushroom bolognese tastes so close to the meat version that you’ll barely realize the mushrooms are disguising themselves as beef. It’s low in fat and full of vegetables. Of course, bolognese is usually eaten with pasta, but for this to remain a “low carb” recipe list, I suggest eating it with brown pasta that is packed with fiber. When I gave up meat, my mum’s bolognese was one thing I struggled to replace. I even found “fake meat” like Quorn, which is okay if you’re easing off of meat but isn’t the healthiest of alternatives. Then, while watching a vegan Youtube channel I saw that once pulsed in a blender or finely chopped, mushrooms have a meaty taste AND texture.

Begin by washing and chopping the vegetables. Dry the mushrooms and place them in a blender and pulse until the chunks are a similar size to ground beef. Either cook ingredients in a pan first for less time in the crockpot or simply add them straight to the slow cooker.

Begin with the onion, carrots, celery, garlic and then pepper. The liquids and spices go next. Lastly, add the mushrooms. Cook on High for two hours and on Low for four. If you can’t go without parmesan on your bolognese feel free to add that or even find a vegan recipe online. Another optional way to eat this is with that glass of wine that you definitely deserve. 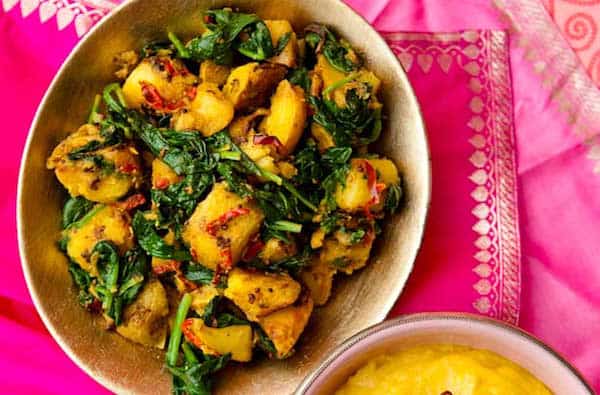 Since moving here from England, where the most eaten cuisine is Indian, I’ve had to improvise at home and make my own “take-away” style. There really aren’t enough Indian restaurants in this country. Anyway, this is one of my favorites.

Saag is typically a leafy, green side dish eaten with rice or naan and originates from the Punjab region. ‘Aloo’ means potatoes, which, for me, makes it more than a side dish and more of a main meal or at least an appetizer. However you can eat this with naan bread and/or rice- but just know that probably won’t be as healthy. Usually, the aloo’s are white, but for the sake of bad carbs and this list, I suggest switching them with sweet potatoes.

Peel the potatoes and cut them into roughly bite-sized chunks. Along with everything else, add them all to the crockpot. If the spinach doesn’t fit in at first, keep checking and adding it in. Cook on High for three hours. Yep, it’s that easy. 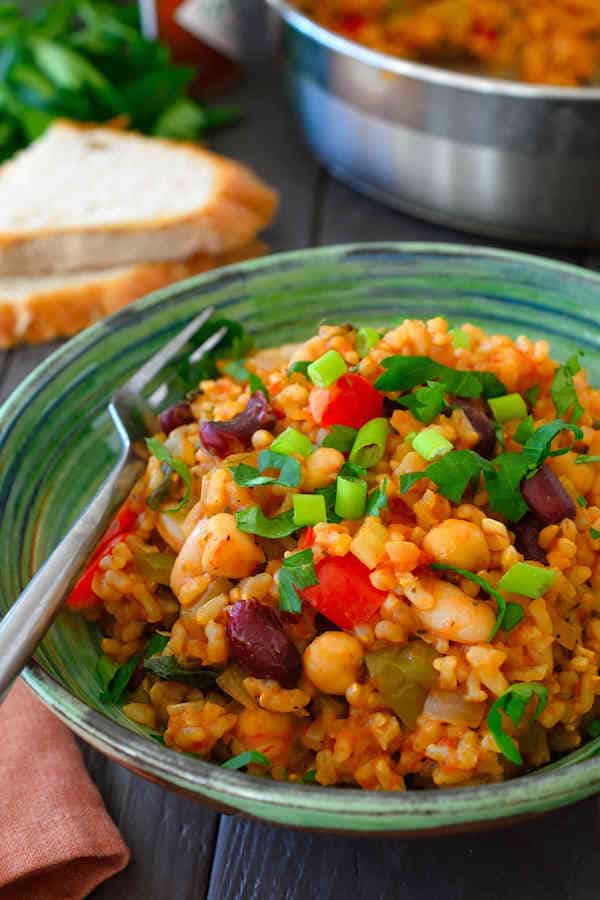 It wasn’t until recently that I tried jambalaya for the first time. Well, it wasn’t exactly the traditional recipe but the vegan one and I loved it. This Louisiana dish is well-suited for a crockpot since it’s a bunch of ingredients that simmer in the same pot. In addition, this version is low in carbohydrates (the bad ones anyway) and good enough to leave you feeling full. If, unlike me, you’ve eaten the version with meat in and can’t fathom having it without, try a soy chorizo. They sell them at Whole Foods and Trader Joe’s. 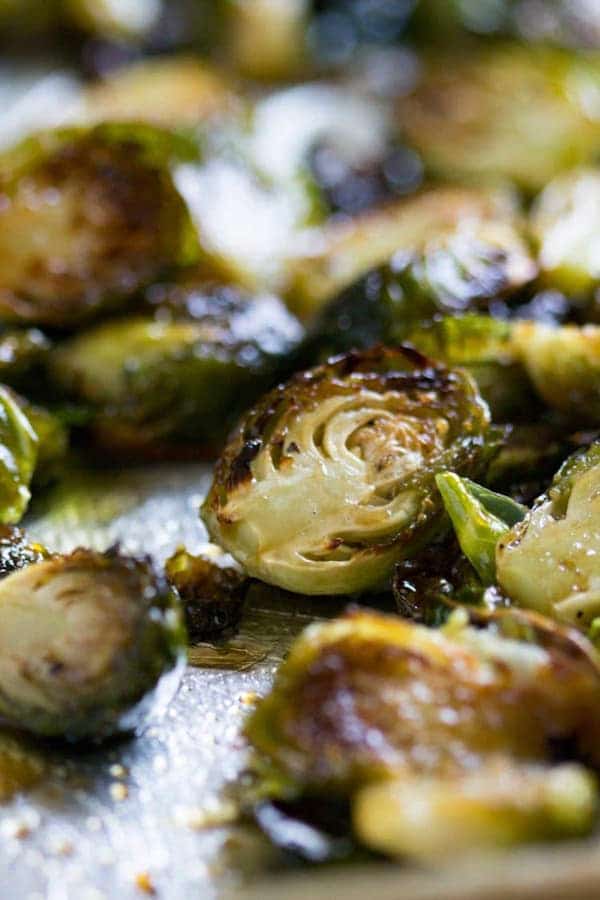 Thanksgiving is almost here, which means that if you’re vegan/vegetarian or trying to avoid heavy, carb-loaded meals, it won’t be much fun. Or it will, and you’ll regret it as you lay on the sofa and try to nap it off.

There is one recipe that’s guaranteed to be enjoyed by most and not cause you to gain however many pounds the turkey weighs. Brussel sprouts are often the dish pushed around the table and rarely touched. Mostly, because they aren’t cooked or seasoned very well. But these areverydifferent andvery easy to make.

Oh, and in this one, you won’t have to add salt!

Wash them, drain them and then pop them in the crockpot. Pour the liquids on and the seasonings. Cook on High for 2 hours and Low for 4. Serve with another sprinkling of nutritional yeast for a cheesy-like taste.

Get Your Feet Stylin’ with These Statement Sneakers

Rms Beauty Is the Makeup of the Future