Everything you need to know about R’Bonney Gabriel 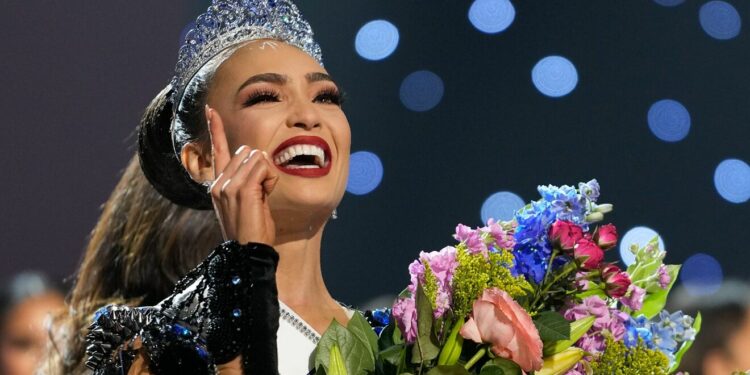 Remigio Bonney Nola Gabriel, known to the world as R’bonney Gabriel, was given the title of Miss Universe 2022. The crown, named “Force for Good,” is awarded to the winner, who is believed to be the most gorgeous and intelligent woman in the world. R’Bonney was a new name to the world, and it created curiosity among people. She was the first Filipino to win this title. Gabriel was brought up in Missouri by a mother who was American and a father who was from the Philippines. Her father, Remigio Bonzon Gabriel, got a degree in psychology from the University of North Texas, and her mother’s name is Dana Walker. R’Bonney Gabriel is part of a big family that includes, other than her parents, three of her brothers. All three of her brothers are younger than her, which makes her the eldest. Gabriel was always interested in the fashion industry. She started off by gaining a bachelor’s degree in fashion design. Apart from this, she also has a minor degree in fabrics from the University of Houston.

Gabriel was always into fashion. Before her pageantry career began, she was designing and creating garments, and it used to be a full-time job. She has also worked for a non-profit organization as a garment sewing instructor. Her first attempt as a model was in the year 2020. She competed in Miss Kemah 2020, representing Kemah, a city in Texas. She won the title and went ahead to participate in Miss Texas 2021. Unfortunately, she became the runner-up for the same, and the title was received by Victoria Hinojosa. She definitely did not give up and tried again in 2022. She won this time, becoming Miss Texas 2022. Her last step was to participate in Miss Universe 2022. She was awarded the title Miss Universe 2022 on January 14th, 2023, and she was crowned by Harnaaz Kaur Sandu, Miss Universe 2021. In terms of what came before the crowning, R’bonney looked stunning in a black gown with navy blue rhinestones embedded in it. Her gown was absolutely stunning, adorned with 8,000 gems and stones. It had the potential to steal the show. Her question was asked by Mara Martin. “Miss Universe recently allowed married women to compete for Miss Universe. What is one more change that you would like to see?” To this, she very graciously answered that she would like the committee to increase the age limit of the contestants because she is 28 and this is the maximum. She also went on to say, “If not now, when?”This answer of hers must have acted as a catalyst for her crowning. Gabriel told a journalist that the climactic moment felt surreal and that she felt like she was going to blackout. She also told them that the crown is kept like a centerpiece on her center table in her new home. Also, she is currently represented by an agency named the Neal Hamil agency.

R’Bonney Gabriel is known to be very eco-friendly. She is somebody who believes in sustainable fashion. She even has her own label, “Magpies and Peacocks.”It is the only non-profit design brand in the world. This brand of hers designs only eco-friendly and sustainable clothing. You can buy a simple t-shirt or a fancy gown from this brand, and it will all be sustainable. She reuses old fabrics and garments to create new ones. Actually, the designs she wears on stages and at events are also her designs. She also tries to inspire others by posting her designs along with process videos of her sewing and making them. Her non-profit designer brand also worked against human trafficking.

Is the Miss Universe Competition Manipulated?

Being involved in controversies is nothing new for celebrities. And it was certainly not for Gabriel. Soon after she was crowned Miss Universe, there was a group of people who started believing that the competition was rigged and the result was based on favoritism. This happened because, within 24 hours of the crowning, R’Bonney Gabriel was featured in an ad for NIZUC resort and spas. Hence, people questioned how the ad was shot even before the winner was announced. Gabriel justified herself by saying that she was the brand ambassador of an affiliate company of Nizuc called Mia, which is also one of the sponsors of the event. This chain of doubt only continued when a photo of Crystle Stewart setting Gabriel’s hair backstage went viral. Once again, Gabriel clarifies that the picture was taken after the crowning ceremony and that Crystle was helping her take the official headshots of Miss Universe.

Gabriel’s personal life includes her career, which is her top priority. She is currently unmarried and not in any sort of relationship. She wants to focus on her career for now. Her victory as Miss Universe 2022 has undoubtedly increased her fame and popularity significantly! Her followers on Instagram went up dramatically. She gained thousands of followers immediately after being crowned. She also received several benefits that the Miss Universe winner is entitled to. This includes a year’s expenses completely covered by the Miss Universe organization, a flat, accessories like jewelry and clothes for a year, and a personal photographer. She also gets to be the chief ambassador of the Miss University Organization for an entire year until the next Miss Universe is selected.