Enjoying the Journey Through Tantric Sex

Tantric sex is an intimate experience with a spiritual history. 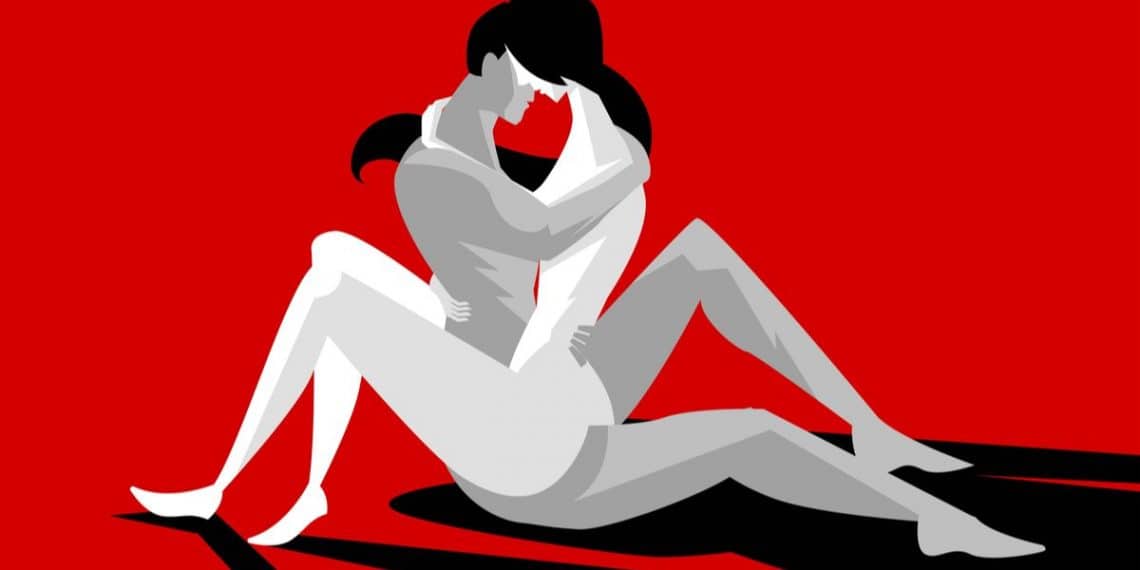 Tantric sex. This is a phrase that you could have come across while browsing Cosmo, or perusing sex advice columns on the internet. Or, maybe you haven’t ever heard of it at all. It has the word “sex” in it, which may intrigue you, or put you off. Either way, it’s quickly becoming popular, as taboo as it may seem to some. So what’s the harm in learning a little more?

Personally, I didn’t really know what tantric sex was. I knew it obviously had something to do with intercourse. I had pegged it for maybe a sexual position, like something out of a new-age sexual expression book. At the very least, I honestly considered it to likely be a passing fad, a new way of having sex that would be hip for a while, then eventually become obsolete.

Well, it turns out there is a whole lot more to tantric sex than I ever would have guessed. The very concept of tantric sex dates back thousands and thousands of years, way before any magazine had a chance to write about it and long before it evolved into a purely sexual act. I was able to narrow down the gist of the origin story and then went from there.

Here’s everything you need (well maybe not need, but probably want) to know about tantric sex.

What Is Tantric Sex?

The true definition is a slow, meditative form of sex where the end goal is not orgasm. This may seem like a slightly alarming concept at first. I know that it certainly made me take a pause. Sex where the goal isn’t an orgasm? What?!

However, you do get to have an orgasm during tantric sex—that is, if you want to. It’s just not what the point of this type of sex is. Instead, tantric sex is about enjoying the sexual journey and sensations of the body. It aims to move sexual energy throughout the body for healing, transformation, and enlightenment.

Tantric sex is an ancient spiritual practice, originating in what we now know as Hinduism.  The practice has been going on for over 5,000 years so the exact pinpoint of origin is a little nebulous (we’ll get to that in a minute.) The Hindu definition of tantric sex is “the weaving and expansion of energy.”

Basically, it’s a very slow form of sex that’s said to increase intimacy and create a mind-body connection that can lead to powerful orgasms. I don’t know if you’ve heard of the term “edging” but it seems a bit similar to that. Tantric sex, however, has intense spiritual undertones and rich history.

What Are the Origins?

It’s important to note that tantric sex has been altered quite substantially from what it was originally created for. In other words, it was Western-ized, like many, many other things (but that’s a whole other article).

Tantric sex was originally based on a loose collection of religious texts in Sanskrit known as the tantra. These texts come from the non-mainstream of Hindu, Buddhist, and Jain tradition.

The word “tantra” literally means “the warp of a loom or the strands of a braid.” There are quite a few explanations as to why the texts were given this name. Some sources think the name is supposed to be a pun because the key texts of Hinduism, Buddhism, and Jainism are known as sutras, which means “thread.” So this is the pun: if a sutra is a single thread of thought, then tantra would be the loom that produces these threads of thoughts into a whole system of thoughts.

Anyways, the tantra was something of a challenger to the mainstream religious beliefs and texts of the time. In fact, a lot of the tantra focused on magical rituals and spells. The texts themselves are quite complicated, particularly if you’re unfamiliar with different religions and their perspective Gods. One of the main focal points of the tantra, though, was something called Shaktism. This is the worship of the Hindu goddess Shakti. What this means is that the tantra’s message was that certain things can awaken various Gods within one’s body and unleash their spiritual energy.

It’s crucial to remember that sex itself wasn’t really even the main point of the tantra. Some texts don’t mention it at all.

So, Where Does Sex Come In?

There are a number of ways the tantra could have evolved into a primarily sex-related experience. One theory is that the interaction of male and female bodies represents the male and female gods, Siva and his Goddess. So, by having sex, people could “be” these deities, therefore channeling their energy and getting closer to enlightenment. If this is a little much for you, trust me, I sort of feel the same way. I’m not sure I believe sleeping with someone could bring me closer to godliness, but hey, maybe I haven’t been having the right kind of sex.

Historian David Gordon White, in “Transformations in the Art of Love,” says that it was all about both semen and womanly fluid (charming, I know). White states, “In these earlier or peripheral traditions, it was via a sexually transmitted stream or flow of sexual fluids that the practitioner tapped into the source of that stream, the male Siva. Siva does not, however, stand-alone in this flow of sexual fluids. Here, his self-manifestation is effected through his female hypo-stasis, the Goddess, whose own sexual fluid carries his divine germplasm.”

As gross as the wording may be, this helps explain why nowadays most tantric sex emphasizes “semen retention,” or the practice of avoiding ejaculation for as long as possible to build up spiritual energy. Now, this is something I can get on board with, and will definitely be forwarding this article to some of the men in my life.

How Did It Become Pretty Much Only About Sex?

Most people now view tantric sex as something purely sexual, not something spiritual or religious. One reason for this is because Christian missionaries witnessed or read about tantric practices and immediately saw it as sacrilegious and honestly, to them, it was horrifying.

One such missionary was the French man Abbe Dubois, who published a book about how terrible and sexual and ungodly the tantra was. Many Westerners likely started associating Tantra with sex because of Dubois. Actually, because he was so appalled by it, in such a conservative and honestly annoying manner, many people probably assumed it was something fun and pleasurable. Because if someone ultra-conservative hates something, it’s usually something fun, right?

That being said, the main reason that Westerners started to embrace tantric sex was because of a man named Aleister Crowley. He was also called the “wickedest man in the world.” Sounds like someone I definitely would have loved to get to know, based on that title alone.

Crowley saw sex as a sort of magical power. As soon as he learned about the tantra and tantric sex practices, he couldn’t stop writing about it. Many people believe he was a huge part of the current Western belief that tantric practices are solely for sexual purposes. A lot of people don’t even know that it has such a rich spiritual and religious history (I used to be one of those people).

Why Are People Doing It?

To be honest, this seems like a question with a relatively obvious answer, but maybe not for everyone. The biggest part of tantric sex is the “holding out.” In other words, you try to keep yourself from orgasming for as long as possible in order to make it even more intense when you finally do. Additionally, all of the time spent leading up to that can bring you closer to your partner, not just physically, but also mentally, emotionally, and spiritually.

Experts also say that if you extend the time and effort of sex, you will reach a higher and more intense level of ecstasy throughout the entire thing, and especially at the end.

Is Tantric Sex Right for You?

This is something I would definitely recommend giving a try if you’re looking for something new to do in bed with your partner. It can also serve well for people who are perhaps getting a little tired of “quick” sex that is only about having an orgasm and that’s it. Practicing tantric sex is also a really great opportunity to illustrate to your partner that you’d like more foreplay and more action besides penetration only.

Almost all sources and experts agree that tantric sex increases intimacy between you and your partner. The slowness, gentle breathing, eye contact, and pretty much all of it are great ways to reconnect with your special person. You may even discover parts of their body you never knew about before. It can bring the two of you to a level that you didn’t even know you could reach.

How Do You Do It?

The first thing to do if you are interested in trying tantric sex with your partner is to forget about making them orgasm. I know that sounds counterproductive and a little rude, but as stated before, this type of sex is not about that. Sure, that’s usually the end result, but the whole point is to not think about the end at all. It’s all about focusing on the moment, and every little detail.

Many experts recommend preparing a little before. This means doing some breathing exercises, some stretching, and maybe even some yoga. Also, you can set up your room or area to be comfortable and intimate. This could include candles, dim lighting, lots of pillows, soft music, whatever it is that floats your (and your partner’s) boat.

What Are the Benefits of Tantric Sex?

So, if any of this sounds good to you, tantric sex might be right up your alley. Your sex life doesn’t need to be stale in order to be spiced up a little bit. There are also levels to tantric sex—you don’t have to jump in feet first and commit to staring at your partner for half an hour in order to channel their energy.

You can start small, with massages or kisses. Then, if you enjoy the effect, you can add in a little more of the more intense stuff and different positions. If you’re looking for more guidance, there are plenty of books available on this subject. There are also quite a few more positions to try, as well. The best part is there is something for everyone, whether you’re shy or kinky (hey, or both.) Give it a try. The worst that can happen is you discover it’s not for you and go back to having regular sex, and there’s nothing wrong with that.