New York Gal » Cyberbullying? the First Lady Is on a Mission

Cyberbullying? the First Lady Is on a Mission 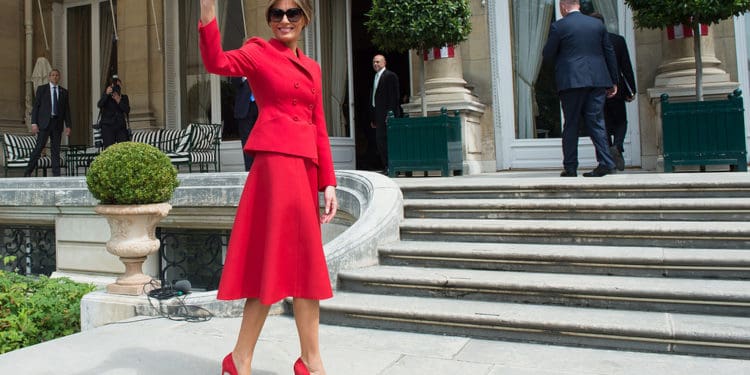 First Lady of the United States Melania Trump is holding fast to her chosen platform, trying to stop child and teenage cyberbullying. However, will she hold up under the pressure?

This week Mrs. Trump was accused of plagiarism, again, after a pamphlet released by her team looks and sounds too suspiciously alike to a pamphlet released by former First Lady Michelle Obama during her husband’s presidency. Original language on Mrs. Trump’s website seemed to credit her as the creator of the pamphlet, but the website was later updated to reflect that she is only promoting the document.

Original language: “Parents, click here to read Talking with Kids about Being Online, a booklet by First Lady Melania Trump and the Federal Trade Commission.”

They are only a few words and different grammatical choices, however, there are major differences as the meaning of the sentence is completely changed. Maybe this is what high school English teachers should refer to when discussing the importance of proper grammar with their students.

Take a peek at the documents side by side for yourself and see what you think:

Fun fact: The White House trumpets “Talking with Kids about Being Online” as “a booklet by First Lady Melania Trump and the Federal Trade Commission.” Except for an intro, it’s exactly the same thing Obama’s FTC put out. pic.twitter.com/AEf6F0gBbt

My apologies if you disagree, but these are simply too similar. This is not the first time Mrs. Trump has been accused of plagiarizing something from the Obama administration. Back in 2016, Mrs. Trump spoke at the Republican National Convention using borrowed words. She repeated, verbatim, sections of a Mrs. Obama 2008 speech, which was so glaringly obvious due to the use of “When I was growing up on the South Side of Chicago . . . “ and real doozy if that was not enough to convince you, “On Barack and my first date…”

The pamphlet in question was placed on Mrs. Trump’s website to promote her “Be Best” awareness campaign to end cyberbullying. Even the name for her platform “Be Best” has been accused of plagiarism. If not accused of outright plagiarism, then a skirting of fine lines, due to a Michelle Obama quote from 2016 encouraging men to “be better.”

“The three main pillars of ‘Be Best’ will include wellbeing, social media use, and opioid abuse,” said Mrs. Trump. “We can and should teach children the importance of social and self-awareness, positive relationship skills, and responsible decision making. Once a child understands these vital skills, they will be able to communicate openly with one another and instill positive feelings of mutual respect, compassion, and self-esteem.”

While this is all noble and full of potential, people have been questioning her intentions. Michelle Obama made it very clear that she wanted to make children her mission, but her platform was not fully realized until roughly a year into her husband’s presidency.

Furthermore, let’s not forget the huge, Trump-sized elephant in the room. Although Melania has chosen to use cyberbully as her campaign, has she met her husband, one of the largest participators in cyberbullying? Maybe she does not believe it counts since he is technically not a child, however, it all reads the same. Many are accusing Mrs. Trump of hypocrisy due to her husband’s flagrant behavior on social media.

While at a dinner at the White House in 2018 with technology company representatives, Mrs. Trump proved her knowledge of people’s comments on her chosen platform, which she is still fighting for no matter what.

“I’m well aware that people are skeptical of me discussing this topic,” said Mrs. Trump, “but it will not stop me from doing what I know is right.”