New York Gal » There Are Knights on the Cloisters Lawn

There Are Knights on the Cloisters Lawn 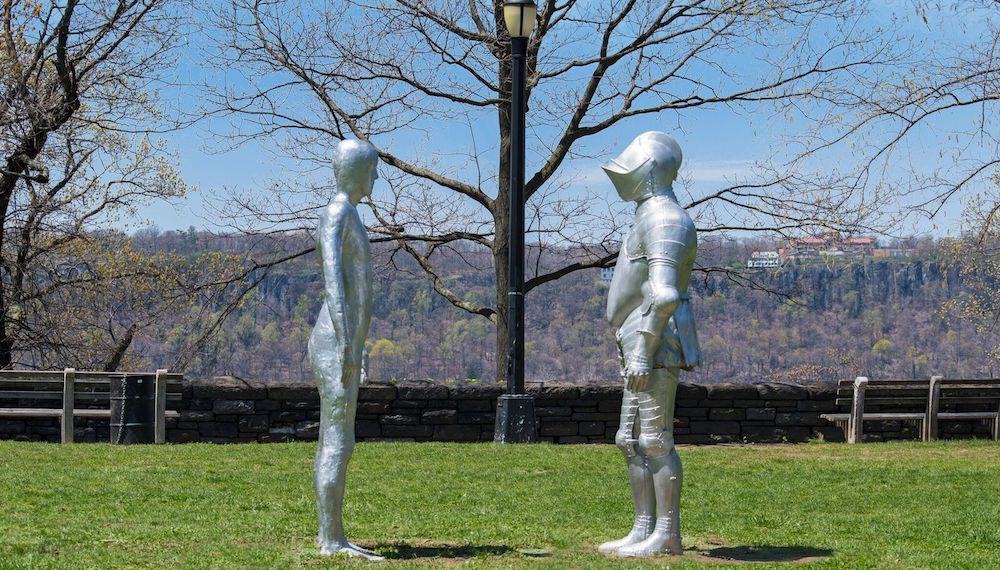 If you live in New York City, chances are that you’ve heard of The Cloisters. Maybe you paid the site a visit on your third grade field trip or have visited if you live nearby. Although The Cloisters are a must see, not many tourists nor New Yorkers venture all the way up to the Metropolitan Museum of Art to scope it out. This summer, you should make it a priority to get up and see the beautiful grounds, which are located at the top of Fort Tryon Park. Not to mention that a couple of knights in shining armor plan on being present, who will definitely make the trip to The Cloisters worthwhile.

There is a new outdoor art display called ARMORS presented on The Cloisters lawns this month. The display is designed by Icelandic sculptor Steinunn Thorarinsdottir, who is known for placing androgynous sculptures at famous sites around the world like Reykjavík’s Hallgrímskirkja church and New York City’s Hammarskjöld Plaza.

The Cloisters is a branch of the Metropolitan Museum of Art which showcases more than 2,000 pieces and artifacts of European Medieval art, architecture, and gardens, which makes it the perfect location for this exhibit.

The ARMORS exhibit, in conjunction with New York City’s Arts in the Parks program, will feature three pairs of statutes. Each pairing will showcase a knight in armor, which will be opposite of Thorarinsdottir’s signature non-gendered nude sculptures. Thorarinsdottir sourced her inspiration for the armor from those found in Gallery 371 in the Arms and Armor Department at the Metropolitan Museum of Art with the exhibit’s curator Donald LaRocca. The 16th-century Medieval suits were a completely new area of study for Thorarinsdottir since her ancestral ancient Viking warriors did not wear full suits of metal armor. The two selected three sets of the armor to replicate using 3D renderings and aluminum along with Thorarinsdottir sculpting each of the nude figures as a direct response to their specific, opposing knight.

“Ancient armors are in themselves sculptural forms," said Thorarinsdottir in a statement. "They were developed for war but they give a sharp insight into the psyche of man. I wanted to merge medieval armors and ageless, androgynous figures in a way that would speak to the human condition today and in the past.”

Thorarinsdottir has been designing and displaying non-gendered sculptures all over the world since 1976 and is celebrated as a pioneer and the first female sculptor to have her own shows at the Reykjavik Art Museum in both 1982 and 1987 in Iceland, which happens to be her homeland.

If you decide to add this exhibit to your to-do list this summer, you can access The Cloisters by taking the A train to 190th street and walking about ten minutes north along Margaret Corbin Drive or by taking more of a stroll through Inwood using the Dyckman Street station on the 1 train. ARMORS will officially open to the public on May 9th after a reception on the grounds at 5 p.m. and will continue to be on display till September 13th.

The Best New Makeup Palettes to Highlight Your Spring