10 Books by Women That Should Be on Your Shelf 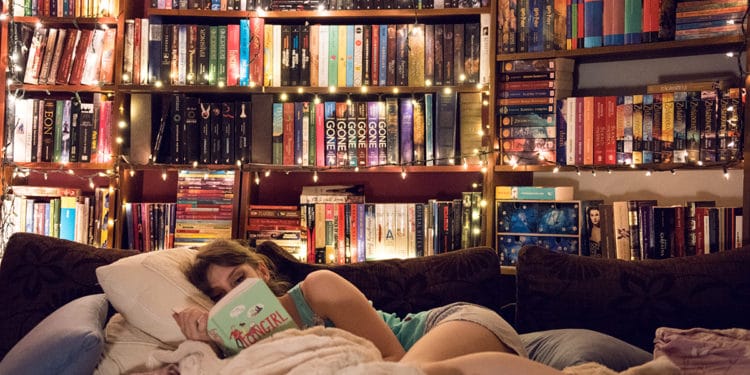 Books offer an endless supply of information and inspiration. For however many pages, they can trap a willing reader into a new world. Or a new mind of an author. Fiction or not.

Unlike relaxing by watching television or scrolling aimlessly through Instagram, reading is a more cathartic and tranquil way to spend an afternoon. It has fewer stimulants that may accumulate feelings of being “switched on” and is akin to meditating or going for a walk. It’s a refreshing past time for your mind. Reading is unsurprisingly beneficial for the brain, too.

Reading is Good for You

A 2013 study conducted by Emory University found that the effects on the brain after reading were still notable days after participants had read. After reading in the evenings, they were asked to come in the following morning to undergo a fMRI scan of their brain. The results showed an increase in connectivity in the left temporal cortex (area of the brain connected to language) hours after participants had finished their assignments.

“Even though the participants were not actually reading the novel while they were in the scanner, they retained this heightened connectivity,” said Gregory Burns, a neuroscientist, author of the study and director at the university’s Center for Neuropolicy. “We call that a ‘shadow activity,’ almost like a muscle memory.”

Similarly, the activity of the central sulcus of the brain was also seen to be heightened due to reading. This is the main sensory-motor part of the brain, but neurons have been known to be activated simply by thinking about an activity, such as running or moving, a term known as grounded cognition. In other words, it can be suggested that reading can make you more empathetic and able to see something from various points of view.

“We already knew that good stories can put you in someone else’s shoes in a figurative sense. Now we’re seeing that something may also be happening biologically.” Burns said.

Another study, carried out by the University of Sussex, found that reading can reduce stress levels in the subjects by 68%. To compare this to other activities people are fond of to de-stress, listening to music was close at 61%, drinking a cup of tea or coffee marked 54% and going for a walk at just 42%.

“It really doesn’t matter what book you read, by losing yourself in a thoroughly engrossing book you can escape from the worries and stresses of the everyday world and spend a while exploring the domain of the author’s imagination,” said cognitive neuropsychologist Dr. Lewis who conducted the study.

And while reading can reduce stress and be an enjoyable pastime, it is a vital way of learning and developing a broader sense of pretty much anything. Everyone should be reading as much as they can.

Read books about subjects you love and hate. Just make sure you are learning, even if you learn that you hate reading about religion. Even the most sporadic of readers have a book that they recommend to people. One that “changed their life” which they promise you’ll love.

As the midterms approach and we look back at the turmoil that erupted over Brett Kavanaugh’s victims coming forward (without any repercussions for him) now is as good of a time to read as much as you can surrounding feminism and the similar subjects surrounding it.

It is important to re-learn how in just a few hundred years a woman’s place in society has advanced. However, it is just as crucial to understand what is ahead for the female community. Particularly in the large presence of female candidates campaigning for the November elections and in the expanding #MeToo movement and justice for women.

Below is a curated list of ten books written by women that every female-identifying person (and males too) should read, or delve back in to.

Little Women by Louisa May Alcott

Louisa May Alcott’s novel was an instant classic when it was published in 1968. And it still remains one of the pinnacle stories of the girls “coming of age” genre.

Set during the American Civil War, we see four young sisters grappling with poverty, death, and a war on top of being on the cusp of adulthood, which would have come earlier than that it does today. For each sister, we see parts of women reflected in their differences and their interactions. It is both heartwarming as it is heartbreaking.

Every time someone asks me for a book recommendation I tell them about this one. Zhang wrote for the online teenage magazine Rookie (made by teenagers) and I’ve followed her since.

This collection of short stories is told through an array of women’s perspectives. Some are coping with womanhood and, more centrally, being an immigrant. She explores family relationships to what if feels like to be an older sister to a grandmother re-telling her account of the infamous student protests in China.

Men Explain Things To Me by Rebecca Solnit

This collection of essays include personal accounts of Solnit experiencing “mansplanations”. In her first essay, which eventually opens to more serious tones on the subjects of feminism, politics, art and Virginia Woolf. Before the book begins, she addressed it to…

“For the grandmothers, the levelers, the dreamers, the men who get it, the young women who keep going, the older ones who opened the way, the conversations that don’t end, and a world that will let Ella Nachimovitz (born January 2014) bloom to her fullest.”

My Life on the Roadby Gloria Steinem

Activist, journalist, and feminist Steinem published NY Times bestseller and Oprah’s favorite listed books in 2015. Unlike her other works, this is more of a journal layout of her times spent traveling. She recalls that growing up, her father would take their family “on the road”. This is something that she names as one of her inspirations to keep going.

Steinem, who is now 84, has lived through a lot of history. She was at the forefront of the feminist movement during the 60’s and 70’s: This is her account of everything.

Gay’s book, which is another NY Times bestseller is a collection of essays which is about feminism- but with a twist. She’s accepting the things that women and POC accept in society, like loving the color pink, but still claiming to be against women being seen as “weak” or “delicate”. In an interview with Time magazine, she said…

“How do we question the world we live in and question the popular culture that we consume while also admitting to our humanity and enjoying sometimes inappropriate things? And having inconsistent ideas? This is a manual on how to be a human.”

The Unabridged Journals of Sylvia Plath

Even if you haven’t read any of Plath’s poetry or The Bell Jar before, this insight into the author’s mind and life in this moving collection of her journals toward the end of her life that detail a toxic love, societies expectations of women, and mental illness is well worth the read.

Before this version, Plath’s husband, Ted Hughes, released an overly edited version. He also destroyed a lot of her other work and abused Plath before leaving her for another woman. As much as she is a cultural icon for women, mental illness sufferers, and Instagram posts, she was a real person. These entries allow us to see her in the most human of ways.

A Room of One’s Own by Virginia Woolf

Virginia Woolf’s own battle with oppression and mental health mirror the upsetting life of Plath’s. Both of them remaining literary and feminist heroines, too.

In this book of essays, which was sparked by Woolf’s denial of entering Cambridge University’s library because she didn’t have a male with her and where she was giving a lecture, she explores how women have been written about, and how in the future, she believes that should change by having women write about women, instead of men idealizing women. But in order to write, women must have a room of one’s own; amongst other things.

A Handmaid’s Tale by Margaret Atwood

Atwood’s dystopian novel was revived earlier last year with the Hulu television series, featuring Elisabeth Moss. For those that are not familiar with either, it is a fictional tale about a religious group taking over the government after a decrease in births due to infertility causing a breakdown in society. In order to save the human race, America becomes Gilead. Women, unless in the top hierarchy, are vessels to carry high-ranking males children.

Without saying too much, the more you read; the more it feels eerily possible. Who was just voted into the Supreme Court, again?

Cheryl Strayed is the Author of Wild. Another book we recommend is this one, where Strayed released the best advice questions and answers from her The Rumpus column.

If you’ve read Wild, you’ll know that she doesn’t hold back. She isn’t squeamish. So it makes sense that all of her answers are bullshit-free and totally what you need to hear. Furthermore, the writing is beautiful.

We Should All Be Feminists by Chimamanda Ngozi Adichie

In a list of books by women, for women, I couldn’t skip past this one. By now, you’ve probably watched the TED talk given by Adichie, where she reads this essay. Or you may have heard a snippet of it on Beyonce’s Flawless.

Even if you’ve read the book-length essay online, it is still worth buying. At only 64 pages long, this little book contains some of the most compelling feminist arguments and harsh statements that, even now, especially now, are a good time to re-read. Keep it in your bag. Keep it next to your bed. Treat it like a bible.

Buy all of these books from Amazon, used or new or, if you use the library, borrow them from there! Seriously, I don’t know why more people aren’t taking advantage of all the free books you can get.

For the perfect combination of selfcare and reading, this week we put together the perfect playlist to accompany this reading list. Have a glass of wine or a cup of tea for a minute.