The Official Lolita Takes the Spotlight in Nyc 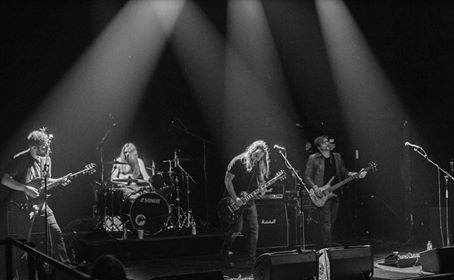 Say hello to Lolita, one of NYC’s hottest, on-the-rise, rock bands. Their unique sound is a mix of melodic and hard-rock that will transport you to your alternative rock grunge days in the 90’s. With that being said, dig out your ripped tees and flannels and get ready to jam out!

The four-man band, Lolita, is made-up of…

The band’s sound has many influences, partly because members Nealy and Sewall work full-time as audio engineers at the reputable Rockwood Music Hall in the lower east side. Working at the Rockwood Music Hall allows these open-minded musicians to be shaped by new sounds and approaches to their craft while making their music a living and breathing entity that’s constantly evolving. Meanwhile, White and Domingue work as bartenders, which works out since a little liquor tends to get the creative juices flowing.

How They Got Started…

The band originated in Charlottesville, Virginia when White and Nealy started a band their senior year of high school which lasted for about three years. After the band split-up, Nealy joined a band in Central Pennsylvania while working on the original material for Lolita with White where he actually played the bass and contributed in the creative direction of the band’s songs. Some of these original songs are now played by the current make-up of Lolita, including, "When You Come Around".

After the band from Pennsylvania started to fizzle-out, Nealy and White began playing in the rhythm section for a band consisting of a variety of genres all the way from rock to rap with Domingue. The three members played well together and started jamming on the side, which led them to write a couple of songs and record an EP. The quick connection they formed as friends and musicians drove them to an impulsive move to NYC. Nealy was the first to move in January 2014, followed by White and Domingue over the course of the next eight months.

Here in the City of Dreams…

How They Get it Done…

Currently, Lolita has done a supreme job of becoming well-known in both the East and West coasts, often going on tours for weeks at a time. As true NYC hustlers, they have produced success on their own without management and had band practices which began at 2 a.m. or later due to their work schedules.

As unconventional as the process is, it’s really working for these guys!

Check out their music video for "Walk-Talk" below:

"These verses are more of a reminder of the times where you’re living off of $2 a day for months just to support your passion," said Nealy.

Be sure to follow Lolita on social media! You don’t want to miss their next show!