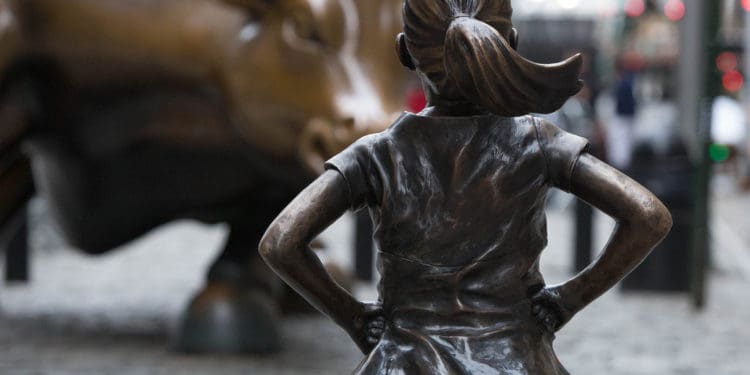 As you walk downtown on Broadway, past historic Trinity Church, you will come upon the beloved and not entirely out of place massive bronze bull. Inspired by the stock market crash of 1987 and given as a gift to the City of New York on Christmas Eve 1989, he has been in his place position of honor for years, affectionately known as the Charging Bull of Broadway. Last year, the bull was joined by a special, unknown young woman deemed the Fearless Girl.

Originally placed opposite the Charging Bull without a word, it was later uncovered that the Fearless Girl was placed at the beginning of Broadway through a parternship of Boston-based State Street Global Advisors, a financial firm, and New York City Mayor Bill de Blasio as an initiative to bring more women onto corporate board of directors. She has worked her magic; in the year since the Fearless Girl was placed, over 150 companies have added women to their corporate boards.

Changes for the Girl However, after a little more than a year on the same strip of land as the Charging Bull, it seems that she is getting a change of scenery. She was supposed to stay on her site for only a few days, and while her popularity extended her stay for over a year, the plot of land is too small for the size of the daily audience the Charging Bull and Fearless Girl attract. At a press event on Thursday, de Blasio and State Street Global Adviors announced the Fearless Girl will be growing closer to her finance roots and will have a new home staring defiantly at the New York Stock Exchange. In a surprise twist, it seems that both statues might be gearing up for a move. At the press conference to announce the Fearless Girl’s move, it was also hinted that the Charging Bull will also change pastures.

The Bull will almost certainly be moved – and will very likely wind up reunited with Fearless Girl. But it’s tricky and some things still need to be sorted out. Anyone who’s ever relocated a 7,000-lb bronze bull knows what I mean. https://t.co/JYIg7OkRyb

If this additional move happens, it will be an exciting opportunity to reunite the Charging Bull with his first home; the artist Arturo di Modica left the bull under the Christmas tree at the New York Stock Exchange in 1989 as a symbol of financial resiliency.

Although di Modica believes the Fearless Girl undermines the original meaning of his Bull, she has otherwise had a very positive public impact. Her sculptor, Kristen Visbal, sees that her impact has far exceeded her initial message. "We added a new meaning to ‘Charging Bull,’ but we didn’t change ‘Charging Bull,’" said Visbal. "I’ve always been firm about that…She represents what any little girl could become." While you still have time to see them together, get over there soon; the Fearless Girl is slated for her big move by the end of the year.