New York Gal » Stephanie Yeboah Isn’t Afraid to Tell It Like It Is: ‘Fattily Ever After’ Encourages Black Women Everywhere to ‘Take Up Space’

Stephanie Yeboah Isn’t Afraid to Tell It Like It Is: ‘Fattily Ever After’ Encourages Black Women Everywhere to ‘Take Up Space’ 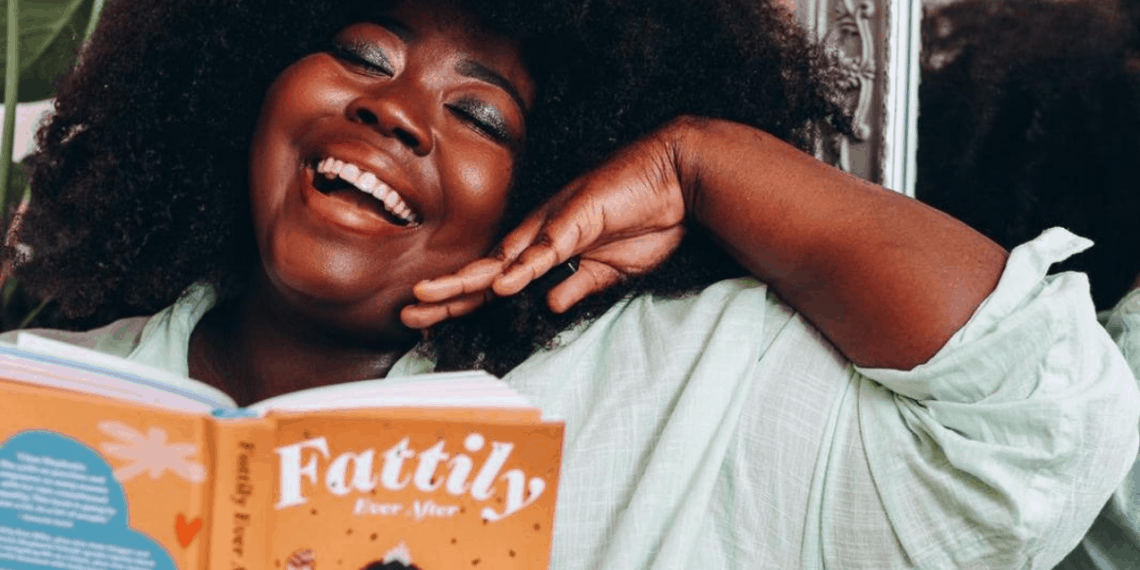 Growing up, Stephanie Yeboah knew she was different from her schoolmates. Unfortunately, it took her years to realize that her uniqueness wasn’t a flaw. In fact, it’s what made her the person she is today  — a powerful, plus-size, unapologetically proud, Black woman.

Like many young girls, Yeboah clipped and collected images from the pages of “Vogue” and lived for the dramatic gowns and gorgeous models she saw on the television. The only problem? None of the women, neither on-screen nor in print, looked like her. This fact, however, is just a small detail that added to the existential dread Yeboah felt every day at home and at school.

Yeboah was not only bullied by her classmates but fat-shamed at home. At the age of 12, she was put on a diet; at 14, she was diagnosed with depression. She also suffered from bulimia.

“The worst thing you can do is try to shame someone into losing weight,” Yeboah tells Metro UK. “Some people call shaming ‘tough love’ assuming it will motivate the other person to change, but it does the opposite, reinforcing the idea that fat people are unworthy, ugly, and that they don’t deserve love or success.”

As She Grew Older, Yeboah Found That Dating As A Plus-Size Woman Was No Easier

Two years following the end of a serious relationship, Yeboah decided to give dating another try. Unfortunately, her anxiety and fear surrounding the dating scene were brought to life after dating someone who had done so for the sake of a dare. In an effort to prevent this from happening to a fellow plus-sized woman, Yeboah wrote about her experience for Refinery29.

“Sadly, my story isn’t an isolated incident,” Yeboah writes. “We’ve all heard of sick pranks such as the ‘pull a pig’ game, which involves a group of men daring each other to hook up with the least attractive woman (in their eyes) in order to gain clout. There are tales as long as my arm from fellow plus-size women who have been duped or tricked in this way and frankly, a discussion needs to be had about it.”

“Ultimately, what I’ve concluded is that men seem to undertake these ‘pranks’ as a way of gaining respect from their male friends at the expense of women’s feelings,” Yeboah continues. “Men, it’s time to stop being impressed by this toxic behaviour. It’s time to call it out, to hold each other accountable.”

Until That Time Comes, However, Yeboah Is Calling Them Out On Her Own

Her book “Fattily Ever After A Black Fat Girl’s Guide to Living Life Unapologetically,” begins with a very simple, yet powerful disclaimer: “This book for me is, first and foremost, a love letter to fat, black womxn. For womxn who look like me, who have had to grow up navigating spaces where we have been made to feel unwelcome, judged, and sidelined. I’ll be talking about a lot of topics that some may see as sensitive or ‘cutting’, so to speak.”

In addition to writing about her own experiences, Yeboah includes insightful tips, honest advice from inspirational figures of her own, including Lizzo.

“Growing-up I really needed to see a fat Black woman on stage owning it — dancing, singing, playing an instrument – proving we can do anything,” Yeboah tells Metro UK. “Lizzo has done so much for fat women, and is proof that when you work hard and refuse to be held back by your race or weight it is possible to reach your full potential. She has inspired me to live my best fat life and take up space.”

“Fattily Ever After – A Black Fat Girl’s Guide to Living Life Unapologetically” is out now and available for purchase on Amazon.

My Personal Experience with Disability Awareness in the Workplace

Bags You Need for Winter in NYC