New York City Shared Its Pizza with the West Coast 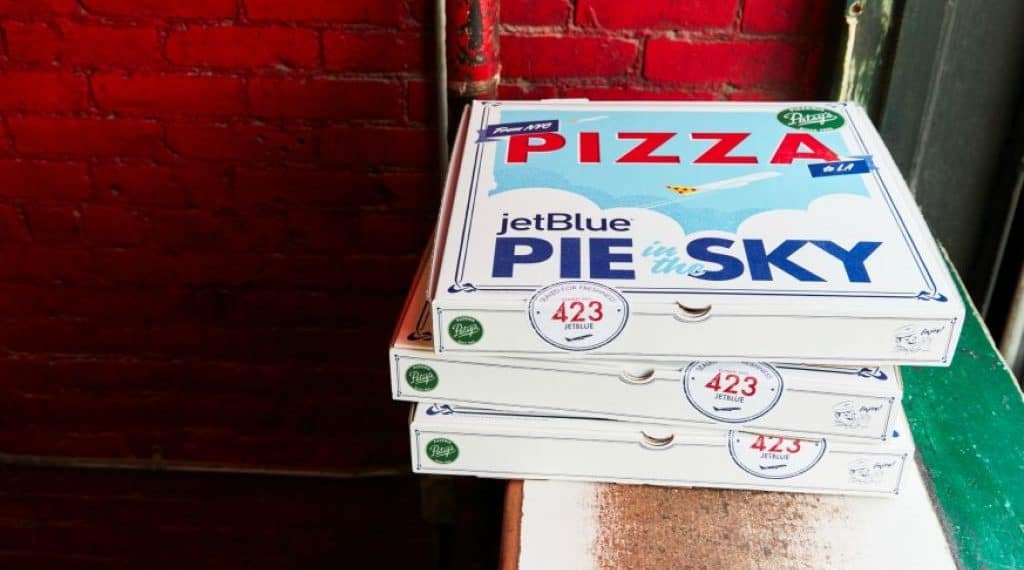 It is universally true that some of the best pizza in the United States, nay, the Western Hemisphere, is found right here in New York City. Honestly, it is simply selfish of us to have not shared the New York slice with the world or at least with the rest of the United States. As a result, JetBlue has figured out a way to do so.

JetBlue is delivering authentic New York pizza to LA! From May 9th – May 11th, a limited quantity of 350 pizzas will be available for purchase each day. Learn more at https://t.co/ZJkYtRzbyk. #JetBluePieInTheSky pic.twitter.com/3GtpEoaZYo

JetBlue partnered with East Harlem’s Patsy’s Pizzeria last week from Wednesday May 9th until Friday May 11th, to fly 350 pizza pies each day from New York City’s John F. Kennedy International Airport to Los Angeles International Airport. The selection was limited as L.A.-ers could choose between a 16-in cheese pizza for $12 or a 16-inch pepperoni pizza for $15. That was the total price, including flight costs, delivery, and even the gratuity. With such a distance, it might be believed that the integrity of the pizza would have been compromised, however, JetBlue claimed that was not the case.

"The quality and safety of the pizza is of the utmost importance," according to JetBlue’s Pizza FAQ page. "A designated pizzaiolo (a specially trained pizza chef) has overseen the logistics of the pizza’s journey to ensure quality is maintained throughout the process. The process by which the pizza is being prepped and transported for its journey ensures that it will not only be safe, but also delicious!"

Of all the pizzerias in New York City, Patsy’s Pizzeria has been preparing quality pizza for the citizens of East Harlem and the Upper East Side since its inception. It has served as a backdrop for major moments in pop culture history, and functioning as a popular meeting place for many of the great Yankee players from years gone by, prominent New York City politicians, as well as Frank Sinatra, Tony Bennet, Dean Martin and Francis Ford Coppola.

"Patsy’s Pizzeria of East Harlem is a prized New York City institution," reads the JetBlue FAQ page. Patsy’s Pizzeria first opened in New York City in 1933 and quickly established itself as a family style, old-fashioned neighborhood restaurant, becoming a trusted authority in providing New Yorkers a taste of authentic brick-oven pizza. Started by the legendary Pasquale Lancieri, Patsy’s Pizzeria is widely credited with popularizing traditional New York-style thin crust pizza and for being the first to sell pizza by the slice.

As expected, the West Coasters absolutely loved their treat from the other coast!

Thanks to Jet Blue for Patsy’s in East Harlem for your Pizza a day from NY to LA! Andrew and I had a few slices – delivered hot!! #blkbx @blkbxcg #jetblue #jetbluepieinthesky #patsyspizzeria #eastharlem #nyc #la @grumpyglat

As East Coasters, we definitely take great pizza for granted. Not only do we have delicious pizza in New York City. When you grow up eating quality food with the best ingredients, its hard to imagine that people grew up less fortunate, eating far inferior pizza. The least we can do as kind, thoughtful, compassionate New Yorkers, is share our phenomenal, too good to be contained pizza with the rest of the nation.