Here's what you don't want to miss at the Guggenheim 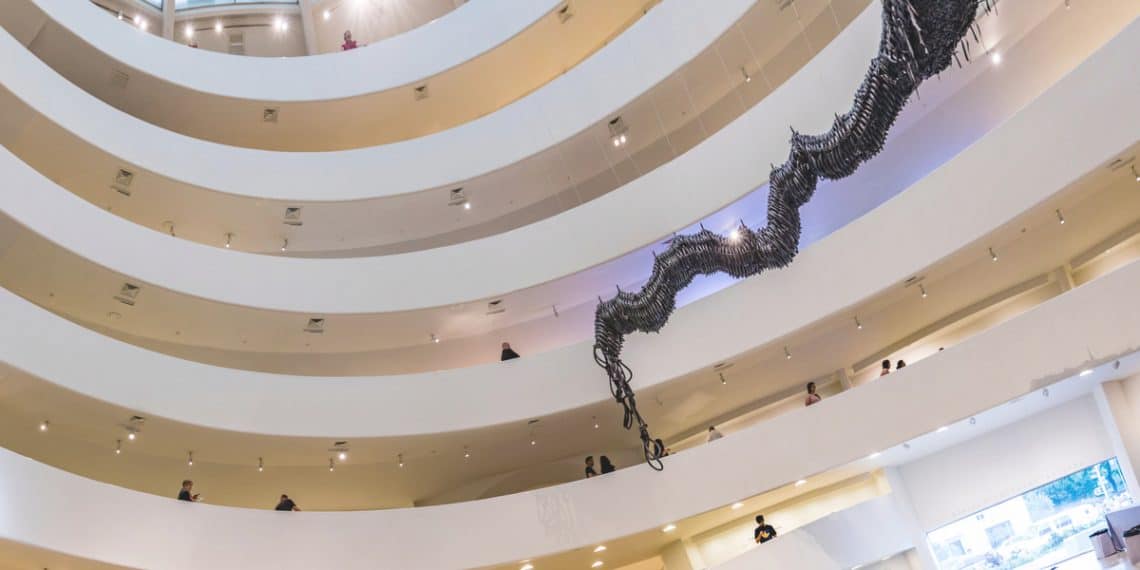 The Solomon R. Guggenheim Museum is an internationally renowned art gallery. Often referred to as “the Guggenheim”, the museum was established in 1939 as the Museum of Non-Objective Painting. It was a modest gallery that housed and preserved Guggenheim’s personal collection of iconic art. However, the collection outgrew its rented space in Midtown Manhattan. Eventually, Guggenheim hired famed architect, Frank Lloyd Wright. Wright was to design a building that would publicly display Guggenheim’s continuously expanding collection.

In the 1956, the museum adopted its founder’s name and construction began on the new building. Subsequently, the museum transformed from a private collection to a public display of iconic art open to visitors in 1959. The Wright-designed structure is located on Fifth Avenue in the Upper East Side of Manhattan.

There have been substantial acquisitions by the Guggenheim’s directors and curators throughout the years. These have contributed to the museum’s growth and further need to expand. Today, the Guggenheim has several locations. There is one in Manhattan, Venice, Bilboa, and Abu-Dhabi. It is safe to say the Guggenheim’s collection has come a long way from its humble beginnings. Nevertheless, the landmark building in New York City is a top tourist destination for art enthusiasts.

Solomon R. Guggenheim built his first art collection in 1929. It had over one hundred and fifty of Vasily Kadinsky pieces. His collection expanded to a variety of contemporary pieces. After that, about six hundred more pieces were added to the collection from 1937 to 1949. Some of the works Guggenheim gifted to the museum. While others the foundation purchased. As a result, these works make up the core collection of iconic art at the museum.They honor Guggenheim’s legacy.

In 1963, the Guggenheim received a very large art collection from Justin Thannhauser. Thannhauser was the son of a European art dealer. Therefore, he was the beneficiary of an extensive and widely historical range of art. He was also well-known for his role in circulating modern art throughout Europe. Since, Thannhauser shared Solomon R. Guggenheim’s passion for promoting the progression of iconic art the Guggenheim Museum was eventually gifted his entire collection.

See Also: Is This the Most Unusual(and Memorable) Museum in New York City?

Constantine Brancusi was a Romanian-born artist. He lived and explored his craft in Paris during the early 1900s. Brancusi focused on simplified abstract forms. So, he tended to sway away from the traditional stylistic approaches, and his sculptures are the epitome of modernized art in the twentieth century. Consequently,the artistic director of the Guggenheim in the 1950s acknowledged Brancusi’s talent and began collecting pieces for the Guggenheim.

Other Featured Collections Include:

Current Exhibitions at the Guggenheim

The museum is currently closed in response to the coronavirus pandemic. However, the Guggenheim’s iconic art can still be viewed online. When the museum does reopen its doors to the public, you will want to get the full Guggenheim experience. So, be sure to take the leisurely stroll on Frank Lloyd Wright’s nearly quarter of a mile spiraling ramp while viewing modern masterpieces. There are gallery guides or digital guides available. You can take a tour, attend an event, eat at one of the restuarants, and even pick up a souvenir at the the museum’s store.

How To Stick To A Budget Without Losing Your Mind

Helping Your Friends Makeup Routine Without Ruining The Relationship